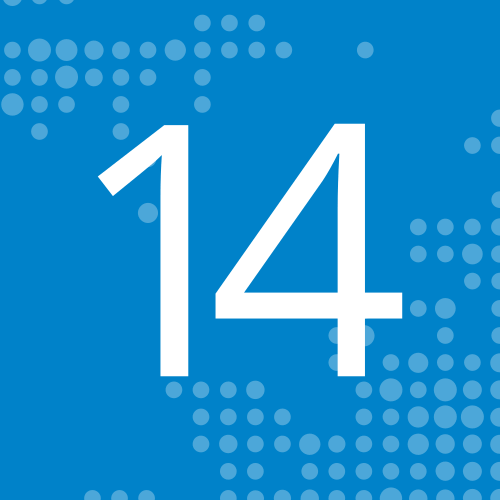 If you want to install Nextcloud 14 but prefer to use the updater, note that it will take time before Nextcloud 14 is available there. We roll out incrementally, that is, today only 20% of the Nextcloud installations gets notified. If no problems are found, we will add another 20% or so later this week and probably go full out next week. If you don’t wish to wait, you can switch to the beta update channel where 14 is immediately available. Don’t forget to go back to the stable channel after updating!!

We know you use a private cloud to keep your data yours! With every release, we bring new technologies, visible and invisible, to secure your files. For Nextcloud 14, we introduce two main security improvements:

Video Verification is an innovative new way to verify the identity of the person you share with before you hand them over the password for the share. Rather than emailing or sending the password over chat, the recipient of the share has to use a video call to request the password from you. This eliminates the risk that a spouse, kid or hacker who has access to your email or mobile device has a chance to see the data.

A new 2-factor authentication provider named 'gateway' was introduced which allows users to use the secure messaging apps Signal and Telegram as well as various SMS gateways as second factor to secure their authentication.

Learn more about our improvements in security and authentication in our earlier blog post on the subject.

File sync and share is evolving - working with others is becoming more and more important. You don't share a document simply for somebody else to download it, you want them to give you feedback on it, or make changes! Nextcloud 14 makes progress in this area. You could already comment on files, but a share can now have a note attached as well. And you can search for files by content of comments, so if you don't remember the name but something you said about it, it will pop up!

If somebody shared a file with you and you accidentally deleted it, you’ll now be able to recover it: there is a new overview of shares in the side bar, also showing those you deleted. 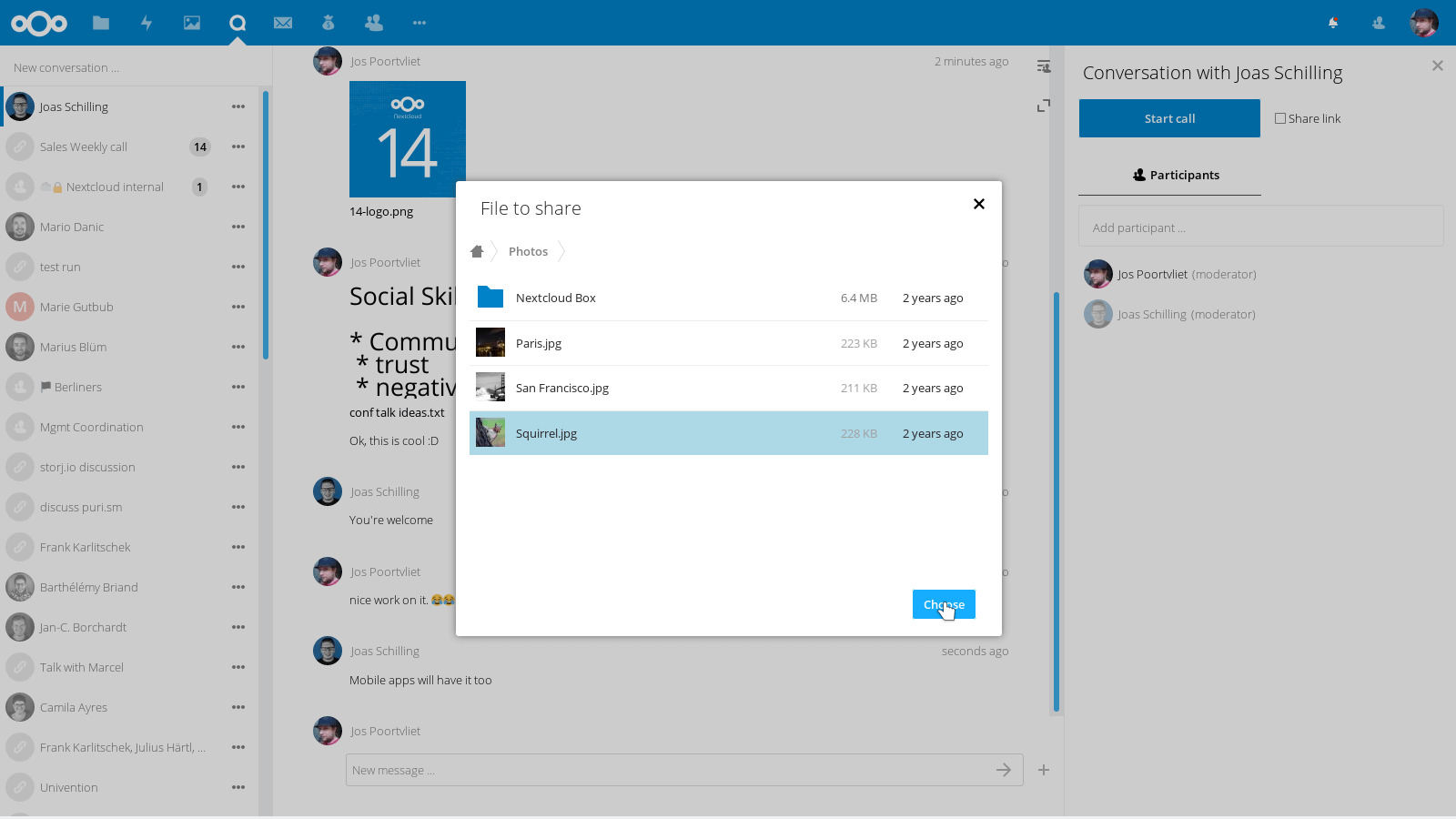 Talking of video calls, there have been a lot of improvements in Talk and some big new improvements are still coming. Here's an overview of what is new and better:

The Nextcloud Groupware suite introduces resource booking in the calendar app. A major area of improvement has been the Deck app, a digital Kanban board, which has now officially been added to Nextcloud Groupware. It features integration with Nextcloud Files and offers an easy to use tool for teams to plan their projects. 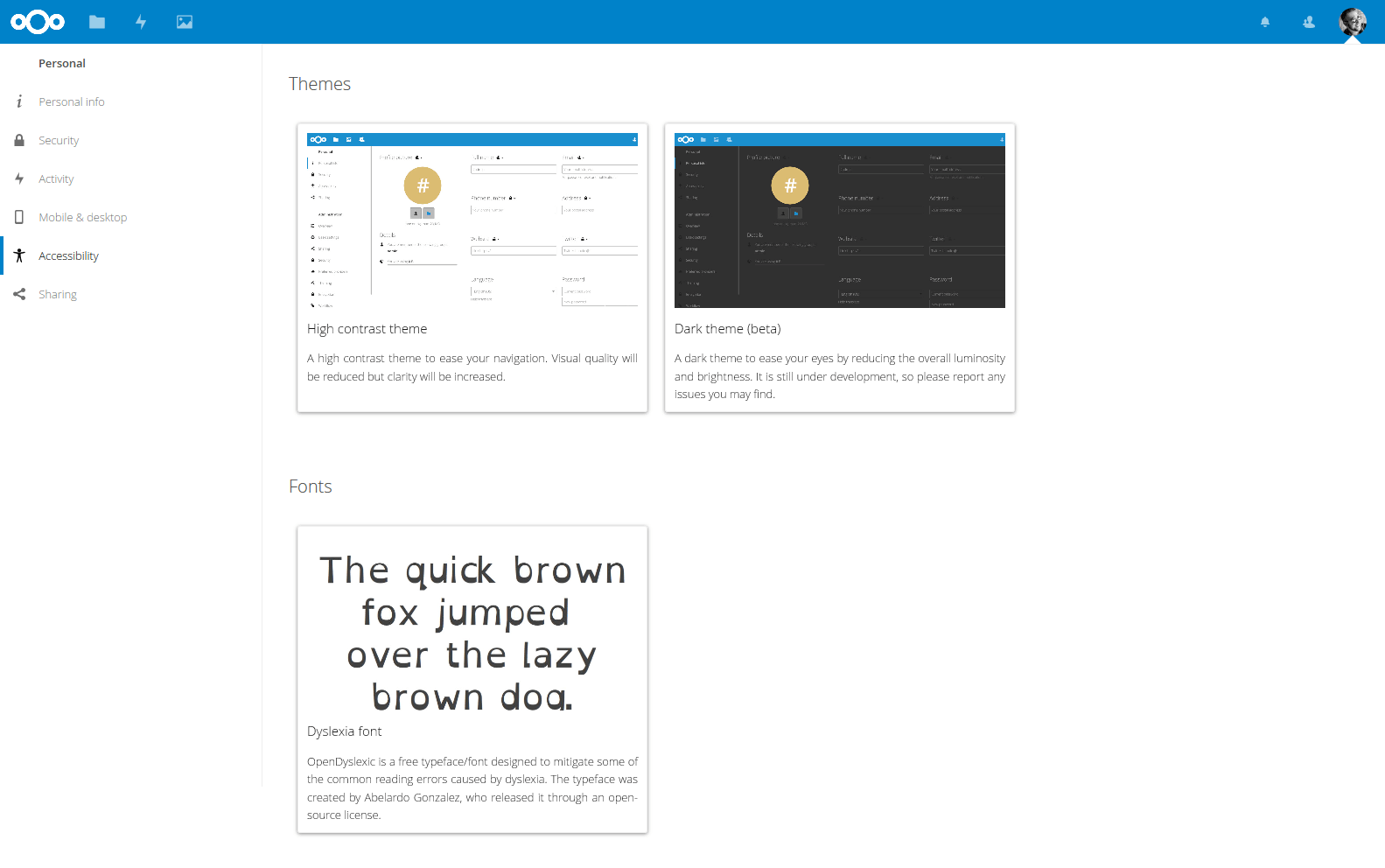 Major user interface and design work was done in this release, introducing accessibility features with a dark theme, a high contrast theme and a dyslectic font set as well as making Nextcloud more accessible to users with vision impairments thanks to keyboard and screen reader navigation improvements. An updated first-run wizard and a variety of small changes to the files app makes Nextcloud even easier and more fun to use.

Read our blog on accessibility in Nextcloud 14 here. 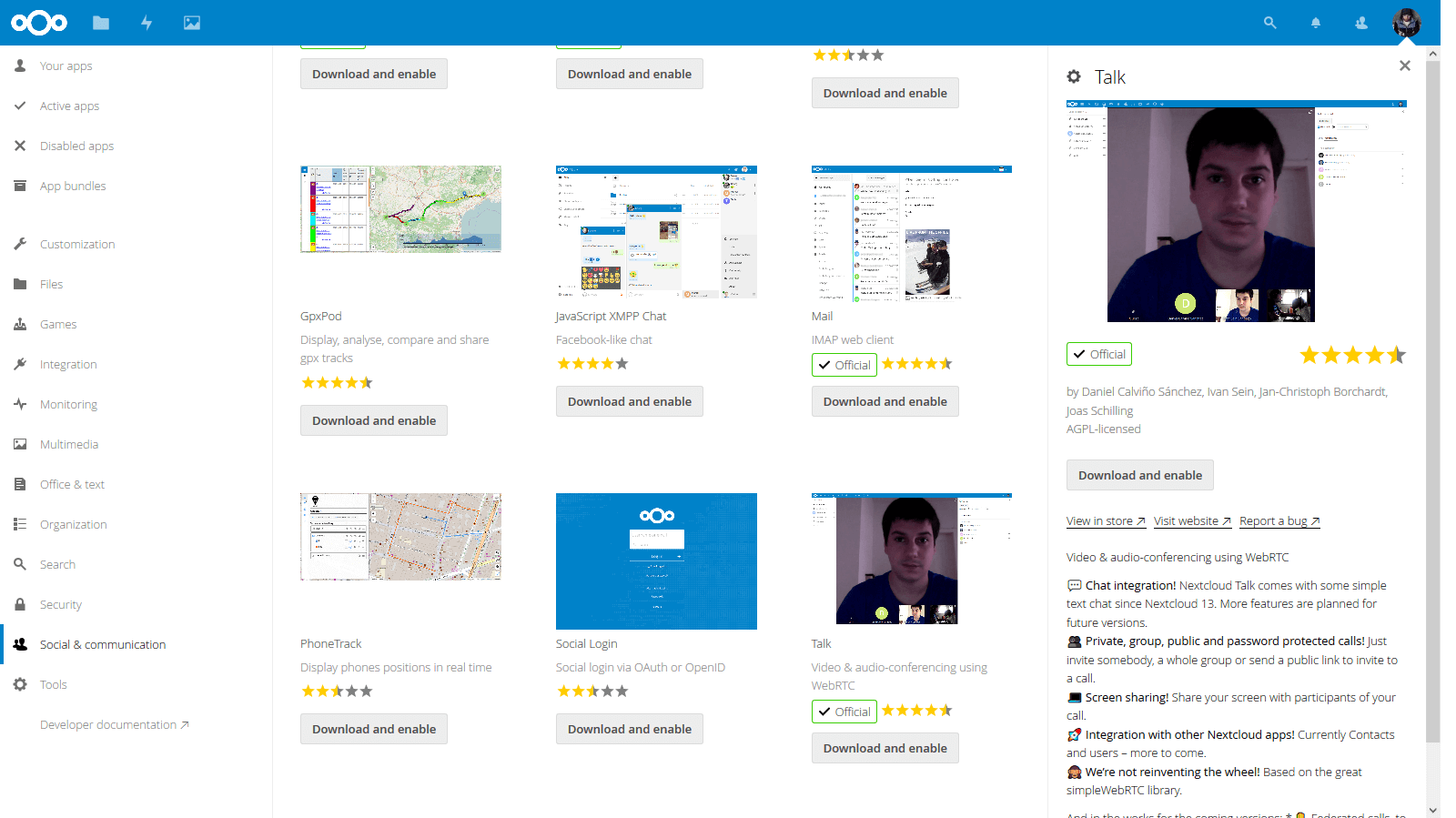 The system administrator area has received a restructuring and app management was improved with more detailed information, cross-category search and an easier app update process. The Nextcloud user management interface was optimized for larger installations the upgrade process received many improvements. System administrators are now informed about the changes which will be executed by the updater and if compatible versions of all apps are available before upgrade. Nextcloud now supports logging to the systemd log and users are notified of major changes in a new release with a popup on first login.

Watch the YouTube video below to see the new app management in action.

For enterprises: Compliance and more

Nextcloud solidifies its position as the easiest file exchange solution to achieve compliance with regulations like the European GDPR and the upcoming California Consumer Privacy Act. This release introduces a Data Protection Confirmation app and separate audit log file, complementing to the existing Impressum/legal notice and data request apps available in the Nextcloud Compliance Kit. Using the applications in the kit as well as extensive documentation, supported by our compliance expertise accessible through their Nextcloud Subscription, Nextcloud customers can ensure full legal compliance with a minimum of effort. 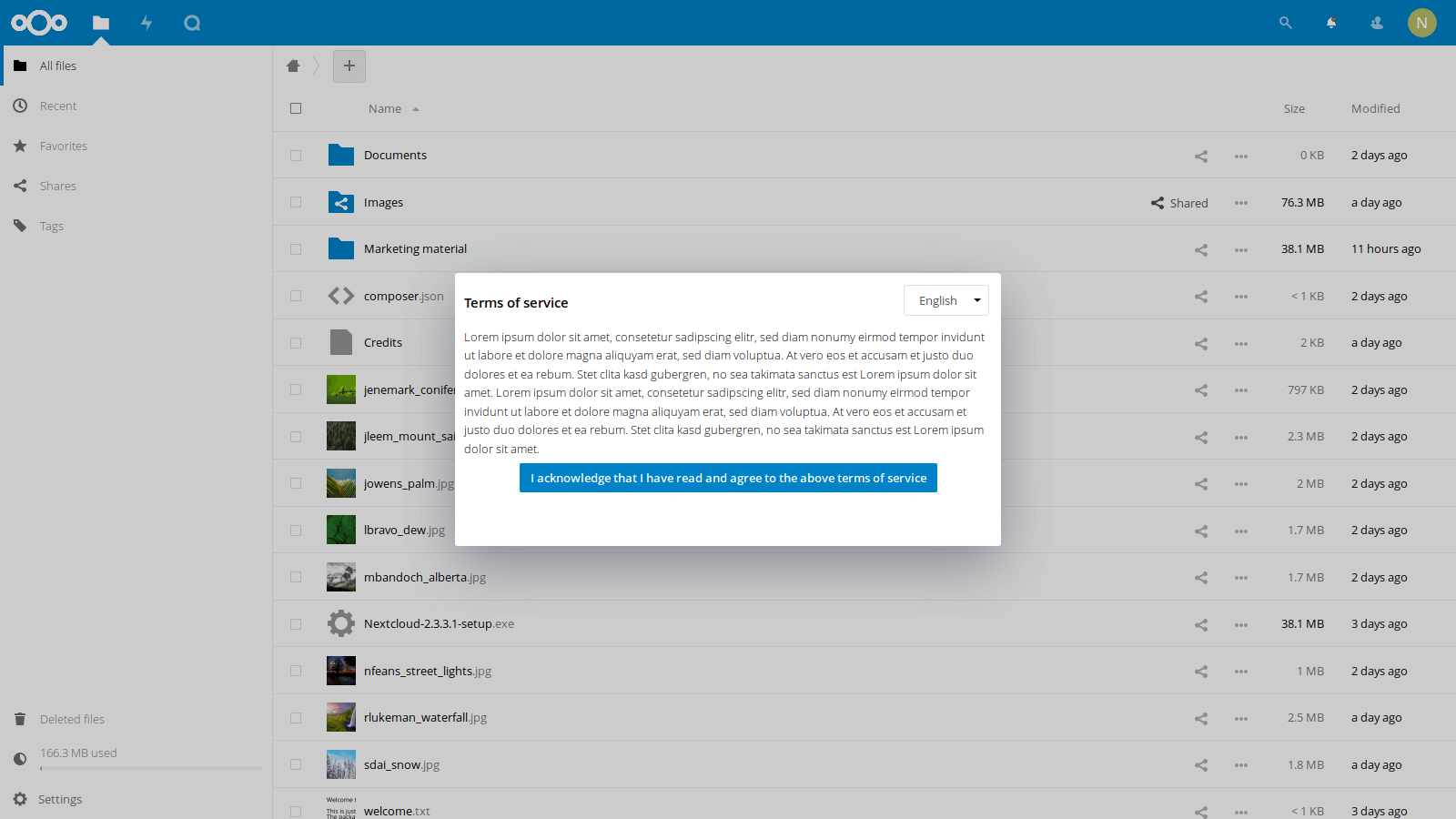 Enterprises will also appreciate improvements to the storage subsystem of Nextcloud, improving compatibility of automatically generated ZIP files on download and adding Swiftv3 compatibility. New is also optional integration of the Nextcloud log in the systemd log.

Thanks to a collaboration with the TU Berlin it is now possible to authenticate to Samba servers while using Kerberos authentication. Note that this requires the server to already have a valid ticket to authenticate! The Nextcloud SAML app was updated with support for multiple Identity Providers, allowing a server to have both local users and SAML authentication. The SAML configuration was also simplified.

You can learn more about some of these features in an earlier blog. 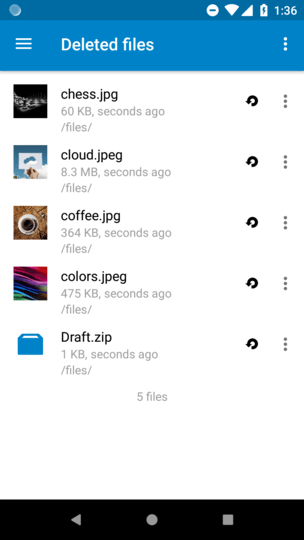 For developers: versioning, federation 2.0 and more

For developers, Nextcloud 14 introduces access to the versioning and trash features through our API, already prompting work for desktop and mobile clients to integrate these functions in upcoming releases. There is now support for PHP 7.0, 7.1 and 7.2 and we're committed to supporting the upcoming 7.3 release as soon as we can. There is now support for the new and improved ARGON2I hashing algorithm and Federation 2.0 enables developers to support exchanging calendars, contacts, Talk calls, chat and other content between Nextcloud servers in app releases over the coming months. This was recently covered in a blog post for developers.

Read our earlier blog about what is new for developers in Nextcloud 14.

Read about the Android 3.0 release which comes with support for Trash and comments here.

Looking for someone to create a sIP integration NextTalk
[Production] built-in updater to Nextcloud 14.x.x
Nemskiller September 10, 2018, 10:41am #2

WONDERFUL NEWS !
I will test this tonight,
Will report bugs tomorrow

You should really consider testing the RC’s so we can fix them before it is released. Also, if you find an upgrade bug, you earn a Nextcloud t-shirt! No, only in the RC, not in the final

@jospoortvliet I tested the RCs but unfortunely found this showstopper after moving to 14.0.0.19
https://github.com/nextcloud/server/issues/11117

Sound delicious but i don’t have spare hardware for testing RC.
I’m always on the stable versions, because all my servers are production’ servers.
I was kindly joking about the bugs of tomorrow

Can someone confirm that, if PHP5 is still in use, Nextcloud 13 denies/not offers the update to v14, so no one will accidentally run into the situation, that an update needs to be reverted due to unsupported PHP version?

On a test install with PHP5.6 the admin panel shows warnings about the PHP version and indeed NC14 is not offered. But as NC updates tend to be released in waves, I just want to be sure

Update btw. went fine on my PHP7.2 machine, same as all v14 betas and RCs

. Thanks very much for the good work!

Ah a tiny: When will v14 docs be live? Currently only v13 docs are linked and manually edit the URL to 14 seems to just show v13 as well: https://docs.nextcloud.com/

Nice smooth update from 13 to 14. Nothing fancy in my install, but all went well, thanks to the Nextcloud team.

Ah a tiny: When will v14 docs be live? Currently only v13 docs are linked and manually edit the URL to 14 seems to just show v13 as well: https://docs.nextcloud.com/

I think it will be a while. Documentation can be a beast, especially for something as large as this.

Documentation can be a beast, especially for something as large as this.

When it is updated in parallel to the actual coding, then it is not a problem. The default issue/PR process sequence just needs to include the related doc updates, if required, same as changelog entry etc.
But I think this is already the case, since on GitHub the docs seem to be already up-to-date, besides some minor meta things perhaps (version history page): https://github.com/nextcloud/documentation

Upgraded from 13.0.5 and now can’t use Talk, I’ve tried to upgrade Talk to latest 4.0 but it show the message “Nextcloud v13 or lower is required”

One of my instances still tells me 13.6 is actual in stable. The others updated smooth. In the end I selected beta, did the update, and selected stable again. No problems so far.

It is nice to have a new stable release available, even nicer when this comes without extra effort through Docker image.

The installation went smooth but I got a few messages, the last one stopping me completely:

After starting the docker image, Nextcloud announced it would upgrade the database and deactivate incompatible applications. These were: Calendar, Contacts, External, Notes, Taska.

Not too bad, I assumed I would just reinstall the updated versions again. After migration finished again the statement that the mentioned applications were deactivated. Nice user guidance.

Then I logged on as administrator and tried to reinstall the missing apps. But hey, ater clicking the Install button for Calendar I got a pop-up asking for my password. And again, and again… until a message popped up saying I would not enter the password fast enough. What…?

I logged off and tried to logon again just to be told I am using a common password and I should change it.

Fair enough, I used that password for simplicity on my own network. But how do I change the passwort? Nextcloud tells me to but does not offer a chance here. Other users can still logon but not install apps.

How can I change the adminsitrator password, or at least deactivate this password validity setting? Should that not be turned on only after asking the admin, just like the verification for apps that get thrown out?

if anyone want’s to test nc14 before you update.

if your server is connected to the internet and you have a valid dns record you may run
myabe you have to edit /var/www/nextcloud/config/config.php and add the servername or ip address to the trusted doamins.

replace nc@example.org with a real email address. it won’t run with the example.org address.
you may also change the variable fqdn to your needs.
dhparam_numbits=1024 is only to speed up things. remove for more security. 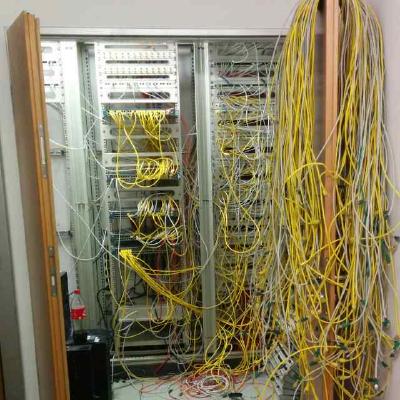 DO NOT RUN THIS ON AN EXISTING INSTALLATION!

Is someone else seeing this on his server? 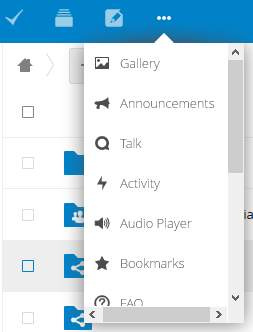 When I saw the Dark Theme I was so excited, but it’s a bit optimistic, that I can really read that 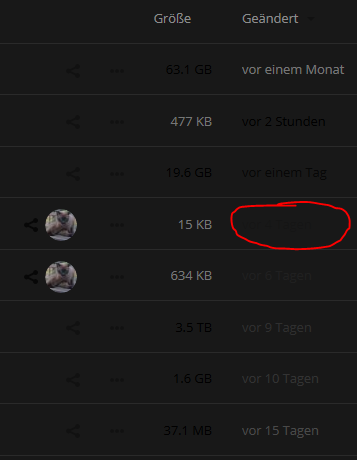 @jospoortvliet
Thank You for your support. @icewind fixed it :-)

Not all are using the forum but the eMail-option

was not e2e-encryption planned for version 14?