Why does Nextcloud restrict characters in directory names?

Using nextcloudcmd, I cannot upload a directory with the name:

Nextcloud gives an error about an invalid character, although it does not identify which character. Presumably it is the double quote, as removing this avoids the problem. Linux does not have any objection to this as a directory name (with the double quote), nor does Apache. Why is it a problem for Nextcloud?

I think there are multiple reasons why these characters shouldn’t be used in file and directory names:

Why can’t man walk on the water? At some point you have to find a level of negotiation which fits for most of the use cases and focus on it. You never will get a 100% match for all available options/functions on all OSes.

Have you ever asked MS why they are not supporting the same characters as Linux - most likely not. In the meantime you have to live with this small issues and rename the directories

Why so negative? Microsoft is a law unto itself. I don’t use Microsoft products if I can possibly help it. Presumably Apple, being based on Linux, is also perfectly capable of handling a full range of characters for directories.

Why should we be confined to the lowest common denominator? I’ve always taken the view that software should always be as generalised as possible, within practical limits, and not arbitrarily confined. In general, it seems reasonable to follow a principle of supporting the standards that exist in each client environment, unless it is impossible to do so.

It’s a general frustration that digital music, which ought to be capable of being hugely user friendly, is actually beset with any number of stupid limitations that make it far less usable than it might be. Messing with directory names that were set by a music provider is just one of them.

And pCloud is not a big outfit, which is competing in a similar space to Nextcloud. Asking to implement what appears to be a de facto standard is hardly asking anyone to walk on water.

The directory was created automatically by the Hyperion Records download manager…

Maybe request to have a say under what name the downloaded file is saved?

Uugh, how did you come to this conclusion?

There are many filesystems out there (ext3/4, btrfs, ZFS, APFS, NTFS/FAT, and many others of different storage systems) and Nextcloud needs to cover all of them, otherwise client and server would not work together and doing of any magic like character changing is the root of complexity).

But doesn’t the original post prove that Nextcloud can’t create a folder with a quote (") in its name?

If that is true, what is left of your interoperability argument?

And what exactly all those file systems’ abilities have to do with the limitations of applications like Nextcloud?

And what exactly all those file systems’ abilities have to do with the limitations of applications like Nextcloud?

If you can create a file with a very long name e.g. 300 characters on your local device and the storage can only have filenames with max. 255 characters. How to handle it?

Same for characters like ". The server, the scripts, the sql statements, the storage, all of them must be able to handle this character.

Why can’t Nextcloud create a folder with " in its name?
Or did the original poster do something wrong…?

Why can’t Nextcloud create a folder with " in its name?

I tried to explain what can cause trouble and therefor there are limitations.

Or did the original poster do something wrong…?

No, but he is trying something which is not possible at the moment and the system is telling this to him.

Feel free to write a good feature request at GitHub to achieve that function.

It has been uploaded to the server: 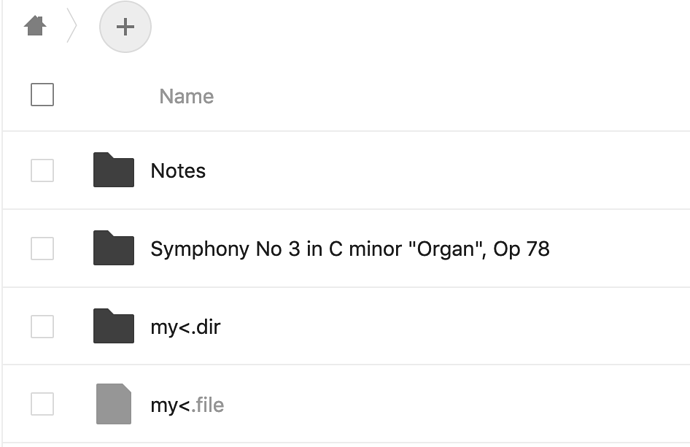 On windows this is not possible. So the client responds with an error:

@counterpoint Hope this explains it for you.

I tried to explain…

You argue with the use case, I answered you with arguments technical side. Maybe that doesn’t work this time.

But I have interesting news.
Just created a folder with " on my client and it has been synced to the server.
Will check on monday what the clients on Lin and Win are doing.

Maybe the user is right and we found a bug/missing feature in “nextcloudcmd”.

Google uses " as a special character meaning whatever is in between two of them has to be in the search result. In essence, you can’t search for "…

Outlook for the web (OWA) can have an exclamation mark (!) in the password but NOT a question mark (?) - at least in the implementation at my work…

Applications have limitations (how about that for an eureka)…

Double quotes are definitely not allowed in directory and file names on Win10:

I don’t think pCloud can sync on and off this folder from a windows computer :
‘Symphony No 3 in C minor “Organ”, Op 78’

After my almost 40 IT years and having grown up with MSDOS, I still try to avoid any characters beyond a-z, A-Z, 0-9, dot, dash and underscore in file- and folder names -

Sure, nowadays this is totally antiquated and sometimes annoying, but on the other hand it saves a lot subsequent issues

Recently, I ran into an issue where Nextcloud 18 refused to stream a video I‘ve received by public link. Omg - how much time took it before I recognized that the simple reason was a single quote character in the video‘s file name… (and obviously a bug in nextcloud, as the video plays without objection when clicked directly instead by the link)

But it again confirmed my vintage habit…

After my almost 40 IT years and having grown up with MSDOS, I still try to avoid any characters beyond a-z, A-Z, 0-9, dot, dash and underscore…

I try avoiding underscore as well.
Old Windows server (either 2000 or 2003) didn’t like names with underscores in it…

Recently, I ran into an issue where Nextcloud 18 refused to stream a video

I believe Nextcloud applies the “lowest denominator” - what is not supported on even one platform (Win/Mac/Lin), is not supported at all… Or at least using it is asking for trouble… Safe approach…

It was worst when using ownCloud on a IIS Server !
You can’t use accents !
Because PHP is using UTF-8 and windows storage use a Windows-iso charset that is different than utf-8 charset.
BOOM the server goes.
From this day i learned Linux Server.