What modern hardware do you recommend for NextcloudPi?

Got specific hardware you recommend for new users? List it here.

You can also see this class thread going since 2016 titled Best cheap hardware to run Nextcloud on.

2 Likes
Best cheap hardware to run Nextcloud on?
Should I use a Raspberry Pi?
32-bit Support is no longer available from Nextcloud. What are the Takeaways?
Problème de lenteur
REAPERSbattlecry August 16, 2022, 6:04pm #2

My start was an old used laptop.
That’s not really a device but I recommend to use a used device which you anyway have around or from a local/online store for used devices.

The electricity consumption per year would also be interesting. I think in Germany it is not worthwhile for most private users to operate a 24/7-Nextcloud at home. Especially if the system used is not being utilized by Nextcloud or other services.

Why are the rules what they are?

Such a small SBC is also not very power-hungry…

That is great it works for you, but we will not recommend anyone run Nextcloud on even 1gb of ram or MicroSD or USB 2.0 or 32-bit devices any longer. The times are a changing.

edit: Updated rules above. Thanks for the feedback.

Here are my personal views for NextCloud Hardware Choice.

Nextcloud would run just fine on lowest of the hardware. Even which are decade or more old. Front end user won’t notice anything.

Here is an example, 15 users out of which 8-10 are active & transferring large & number files together. 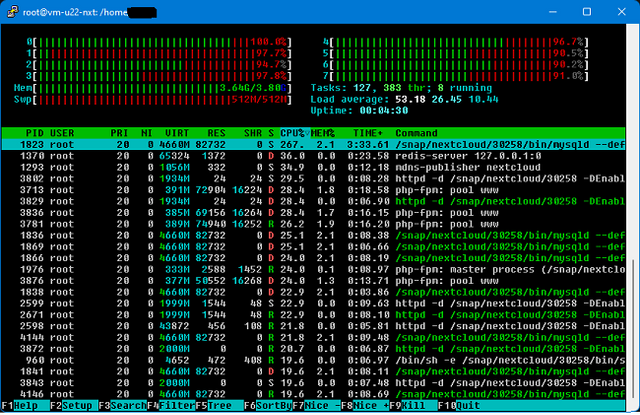 However, if there are no such concurrent load at once or even if there are, number of files and volume of total transfer is low, this same CPU is easily handling double or triple the users count.

NextCloud itself isn’t that RAM hungry. The software itself is happy to operate with even paltry 1GB RAM under Ubuntu 22 (Snap Version).

However, nextcloud has so many modules and 3rd party apps. More Apps & Moules (roles) you plan on using, along with that user count (as discussed above), your RAM requirement will increase.

So once again, look back at your plan. How do you plan to use NextCloud. What kind of role you want it to handle and with what kind of extra apps?

Its the network which becomes bottleneck. Not your relatively slower speed Hard Disk. You don’t necessarily need costly NVMe or even SSD.

Yes sure, SSD will help with your Boot time but servers rarely reboot. Once up, the target for any admin is to keep it up n running non stop. That is what uptime is all about.

In case your user count and volume of data is high, then before adding SSD, plan to upgrade your network to 10Gbps.

Cheap out on everything but always try to use Raid Arrey with new Storage Disks. You may be backing up to this backup server of yours but this server itself can fail and data as you know, is priceless.

So for storage, it must be always in pair (at-least)

There are three aspects here,

If you are a large business then it’s better to leave this thing on the expert and avoid DIY stuff. Contact NextCloud Team for their custom support plans to get things done for you.

If you are a small or medium business, first thing to ask yourself → Why not Cloud VPS Providers? Renting this virtual hardware out of cloud is cheap to start with and gives you the ability to increase or decrease with a simple mouse click.

But if you are willing to host it yourself and at location, then plan it well before proceeding with hardware choice. Adding more RAM or faster storage can be an easy plug n play job but CPU replacement is costly and may require the whole system to be changed so be generous with your CPU selection. Select one with enough headroom for growth.

And as for a home user, I started my nextcloud self-hosting on an Intel Pentium Quad Core (N3530) based Laptop. For single user load its plenty. For a full family, any generation of Core i3 or above is sufficient. Here, more than speed, power consumption is the challenge since most of the time, your server will just seat idle, doing nothing but burning that electricity !!

So for home users, use any hardware that is available for you. If you have the luxury to choose from many, select the one with lowest power consumption!! You can always migrate to better hardware in case the user count increases, and load becomes too high for that present hardware to handle.