We’ll need to ask the nextcloud team @jospoortvliet i add him to his comment.

…the number of overlay icons is not as in many documents state “15” but (effectively) 11 as four alone are reserved for Windows. Dropbox already reserves 10(!!) so the eleventh Icon would be the Error-Icon for NextCloud and the other ones would never show up.

Yeah, most stupid design limitation ever.

WRT fixing this bug, is it reported somewhere? If not it isn’t likely to get fixed

Hello,
I also have the same problem.
I no longer have icone on my folders sync and more sharing option in the context menu.
Moreover, despite the option selected and the presence of the client Nextcloud in the startup applications this one does not start.

I uninstall with Revo taking care of all remove and do a clean reinstall. But every time the software settings are there.

Would have a solution?

Did you try what @AZeroEight described here : Missing sync-icons in windows explorer.

It works for me.

Where do I have to add the three spaces?

Add 3 spaces in front of the name of the OC* keys.

Thanks but i don’t see the OC*keys. 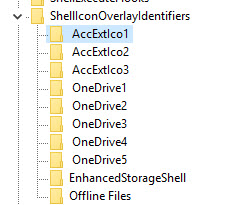 I do not understand too much that I need to uninstall Dropbox ??
Note that the Owncloud client was installed previously but it was uninstalled with Revo unistaler.

Strange, you should have these keys as soon as the Nextcloud client is installed.

As you recently uninstalled the owncloud client, maybe there is a conflict here (keys uninstalled by ownCloud uninstaller ?).

You should maybe uninstall Nextcloud and install it again.

Now I have the same syndrome on my main PC. No improvement after reinstalling and uninstalling the Owncloud client.
There I do not know what to do. It’s strange though.

You can use this small .cmd to fix the issue

after updating to 2.3.3 I did not see icons, so I want follow this thread to reregister the DLL. BUT…I do not find any shellext directory in my Nextcloud client installation nor any OCOverlays*.dll on my PC.
Does NextCloud 2.3.3 stopped using overlay icons?

Due to a limited number of entries for ovelay icons in Microsoft Windows explorer, if a Dropbox sync-client was installed prior to Nextcloud’s, the sync -icons won’t show up in your local files.
In order to fool the explorer you need to rename the five registry key
HKLM\SOFTWARE\Microsoft\Windows\CurrentVersion\Explorer\ShellIconOverlayIdentifiers\OCxxxxx
in
HKLM\SOFTWARE\Microsoft\Windows\CurrentVersion\Explorer\ShellIconOverlayIdentifiers\ OCxxxxx
(the spaces added, though one might suffice but i haven’t tried yet!) 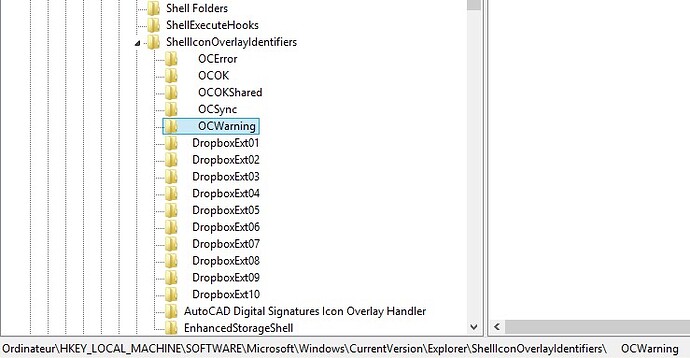 If like Liberium, your using [OneDrive] too, the overlay keys number may may exceed the limit supported by the explorer and you may need another workaround…
(you could try to delete the five [OneDriveN] keys first …)

thanks for your answer. I don’t know why, but somehow I missed to see your anwser. I just see right now.

I never used DropBox sync client or OneDrive.
I checked my registry and I did not have any OCError, OCOK … entries. I even used the find feature for scanning the whole registry.
As I wrote before there was no shellext directory with the OCOverlays DLLs in my system at all. So I reinstalled the NextCloud Desktop Client and especially unchecked and rechecked the Windows Shell Integration feature within the install wizard. After killing and starting the explorer again, the icons appeared.
So for me the problem was that the shell integration was not installed during last update, for what reason ever.

Anyway, thank you for your hint.
afi

Hi,
I also have this issue with missing icons, but in addition to this I am missing the NC context-menu in Windows 10 Explorer, too! There is no possibility to share within Windows Explorer.

I tried to uninstall and reinstall, rebooted the PC, but the context-menu “Nextcloud” is not there. During installation of course explorer integration was activated.

Any help would be appreciated. Thanks!

Thanks for the answers in this thread!

threw a dubious error at first, due to unresolved/missing .dll’s.

This guide from Owncloud suggested to check the dependencies of the dll’s. - MSVCP120.dll and MSVCR120.dll were missing.

I had to install the latest Microsoft Visual C++ Redistributable before being able to run the command. I installed x86 and x64 just to be sure - so I can’t tell you which one solved my problem.
https://support.microsoft.com/en-us/help/2977003/the-latest-supported-visual-c-downloads
As well as the 2013 one:
https://support.microsoft.com/en-us/help/3179560/update-for-visual-c-2013-and-visual-c-redistributable-package

I’m not sure, but our problem might not occur if the vcredist is installed before installing Nextcloud.

Interesting to know is (using 2.5.3) one sync folder account does show the overlay icons, the second account sync folder does not.

Hi
I had the same problem. I read about 15 overlays max. I check registry and I have less that 15 so I didn’t understant why icons are not showed in w10 explorer.

At the begining of the list i have 7 entries with this text -> “several spaces”+OnedriveX and then Nextcloud “OC*” entries.