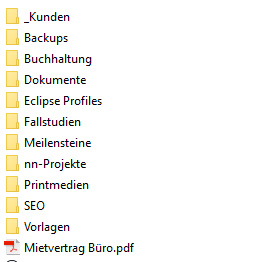 As you can see there are no sync icons on my folders in windows. I don’t know what I have to do. I’ve re-installed nextcloud but nothing changes. I’m using the newest version and also there is no problem with the server because other clients are working including the folder-icons…
Can anybody help me?

On my Laptop I have the same problems… Probably something with the server yet?!

You can try this using an windows admin command prompt :

and restart your computer. It seems like the client is not registering the dll

This doesn’t work. Still no changes!

Really. i had similar issue where all the folders where showing as white and i ran that and it fixed the issue, Is this only happening on one computer?

Give that a try.

I’ve done all what you said. I installed the revo uninstaller and used it to uninstall nextcloud (with temp files and reg-files). Then I reinstalled nextcloud and registered the dll-file. Still no changes!

I have this problem on my Computer and also on my laptop. But my co-worker have no problems (with the same server but different user-account).

On my windows 10 laptop it’s the same since I switched to the nextcloud client. I also tried a clean reinstallation and dll registration without success.

After another reboot the sync icons appear for me. I am sure I already did one after dll registration, however now it’s working. Thanks for the advice @AndyXheli

@witschi87 I guess during nc client installation you checked the checkbox for using shell extension? And as it worked for me do another reboot after dll registration.

I have the same issue with my installation of Nextcloud. I opened the same folder twice, one shows the icon, one doesn’t.

I don’t really understand this behaviour

Did you try running this run

regsvr32.exe “C:\Program Files (x86)\Nextcloud\shellext\OCOverlays_x64.dll” in CMD as admin and rebooted.

I did that now and it seems to work.

…any further ideas? Is there some logging I can enable which would help or a beta version?

Thank you very much.

I found my problem…

…the number of overlay icons is not as in many documents state “15” but (effectively) 11 as four alone are reserved for Windows. Dropbox already reserves 10(!!) so the eleventh Icon would be the Error-Icon for NextCloud and the other ones would never show up.

I moved the NextCloud-Icons to the top by adding three spaces in front and after a reboot the icons show up.

Ah good to know, that something like this can happen, would have never found that.

how do you do this?

It solved the problem for me, will this bug solved in future release ?