Comments are a default, official feature in Nextcloud, allowing you to leave a text comment about a file or folder. Comments can be accessed from the webui and mobile apps.

They are very core functionality, but are extremely limited in practical usage. I really hope they receive some attention. Examples and suggestions follow.

Once a comment is left, how do I know?

When looking at files and folders, how do others users know there is a comment?

I wish a symbol would be displayed for comments available, or unread comments. Here are a couple quick mock ups. See this feature request.

I like either of these because they are visually clear, can be used to access comments easily, and match up with the current functionality of visually adding a Favorite Star or seeing active shares at a glance.

Is the Comment visible if I add this to a Project?

No, comments are not clearly visible from project views.

Unfortunately, comments do not federate out beyond the local instance (see this feature request). You’ll have no way of knowing this beyond eventually realizing those remote users have no ability to read or share comments between servers. You’ll notice how to implement such functionality is still an open discussion.

This really limits the usefulness of comments since outside users who want to communicate with you, using comments, will not be able to do so. Unfortunately, this confusion pops up a lot.

Can comments be shared via the Circles app?
Only to the local instance. Remote user support is being considered here.

Can anonymous guests read or leave comments on shared files and folders?
No, but it is being discussed here.

Unfortunately, no. Comments remain on your local server only. So, any other users within your system will see them. It is possible to write a Markdown-compatible note when sharing a file (or folder), but is not possible to display comments or convert a comment into a note when sharing.

Can we use the Talk app instead?
Nope. The Talk app is designed in a different manner, but also does not yet support federation or anonymous access.

Can I view comments in the Talk app?
Nope, but it is being considered for future development.

Comments in the Deck app
Comments in Deck are listed as a Timeline, so it is easy to assume any remote users will see these comments… but they do not yet. Local users will only see comments that are left on their own servers. This could be viewed as a security feature, but it really makes no sense.

Part of what makes this all so confusing is that any user can leave a comment, but those comments will simply not transfer from server to server. Everyone is just seeing their own local comments… the only way around this right now is to use a different service than Nextcloud to communicate, be it email or some other messaging platform. 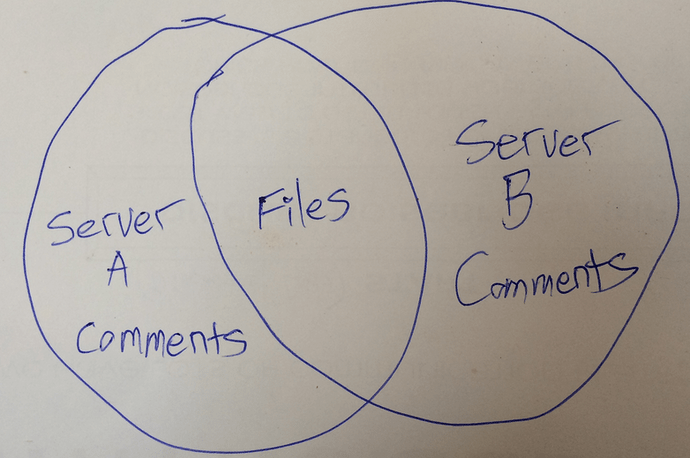 The icon mock ups looks great.
Would love this feature to see realized, would help a lot.

I like your proposals, @just . Is there already a corresponding GitHub feature request and/or work in progress?

@gibelium each hyperlink leads to a corresponding Github issue that has been filed. Please take a look add more context to them if it helps.

It seems they are all still open issues.

Issue for viewing that comments were made on a Deck card.

@anon99283430 this functionality is definitely core. If you know any devs that want to work on it, that would be awesome.

Did anything come of this?

The comments function is useless one can visually identify which have comments and which don’t. Click on every file is not an acceptable solution.

I can understand not displaying them in a mobile app, but web browser or desktop app?

What do you think of this idea @das1996 ? I suppose it could be figured out with the Custom CSS app to continuously show comments in the sidebar by default. Not a dev, but curious on suggestions for improving comments.

I don’t know about android or other clients, but for web based, just having the comment icon near the share button would be great for identifying entries with comments.

It already does exist under the details menu next to Sharing (right hand side) when browsing the Files app.

Makes sense to add it to the left side of the Files app as well. Nice idea!

^^Right, but unless you’re clicking details on each file you won’t know there’s a comment.