I think it is a good idea to make an IFTTT channel for Nextcloud especially for folders & files and the calendar. However, at one point one of the things we need is a cloud, which works with the everyday life and reacts with events occurring.
For example, I would like to upload files automaticly by email. Or get Pocket articles as files to my Nextcloud by keywords. Or …
There are many channels on IFTTT, and they are waiting to work with Nextcloud

I think this fits well with the aim of Nextcloud to manage our data, and deserves consideration to be included in Nextcloud.

That would be great. Currently you only have the ability to utilize the maker channel but that is a litle cumbersome to get to work with SSL and proper authentication.

We would like to use the connection to notify about changes in files in chats (skype, slack and others). Big push for this.

There is a person working to integrate IFTTT and Nextcloud on this Github page. Perhaps we can send them encouragement.

Also, here is the guide to getting started with IFTTT webhooks for DIY projects.

I contacted an employee at IFTTT today and was told that a representative of Nextcloud is welcome to apply for the platform. Looks like basic requirements are a public API and Oauth2 support. Ticket opened here.

But did anyone got something like that working? Maybe with the open-source alternatives Node-Red, Huginn, Trigger Happy or Beehive?

A simplified NC app that does something similar to IFTTT would be awsome though, especially with XMPP, IRC and RSS support

Great stuff, seems like the Nextcloud developer was very quick in closing

I asked for some more attention - this would be awesome.

Ok, I decided to take some action on this… let’s hope @joeplus is still interested in his excellent idea to develop an app. All devs for the projects I’ve contacted so far seem to be in agreement that integration will only happen through a Nextcloud app. My .02 after reading back through these threads is to make an app that leaves open the potential for integrations with not just IFTTT, but also the open source platform alternatives. Perhaps the app could be named something like Nextcloud Triggers. For what it is worth, I’ve contacted every one of these projects about the possibility and posted a meta-discussion thread on github here for getting started.

Contents of above link pasted for easy reference:

Hi Joe, thanks for considering this. I’ve chatted with the IFTTT dev, Trigger Happy dev, and some Nextcloud devs about making integration happen. All groups seem to agree it should be through a Nextcloud app. Discussion thread on the Nextcloud forum can be found here. To quote this Nextcloud server github request #7548:

IFTTT works more or less by connecting to one API to another one. So basically, as soon as certain NC component contains an API, it is compatible with IFTTT.I think this most NC apps are at least planning to introduce an API, but most of them don’t have it.

In my .02 it could be nice to allow this app to communicate with other, open source alternatives than just IFTTT. Perhaps it could use a name that leaves this option more apparent such as Nextcloud Triggers… here are some open source platforms I’m aware of + integration request tickets on their github pages:

Thank @just for picking this up! I am definitely keen to get started with this idea.

I originally thought to integrate with the IFTTT webhooks channel first as, to my understanding, a fee is required to get an “official” channel for Nextcloud. Since I am not an employee of Nextcloud I can’t really get in in touch and ask or negotiate if it is possible to wave the fee for a FOSS project. I would actually prefer to have an official channel rather then the webhooks route as this would provide for a smoother setup I think. Did you get any feedback on this from either Nextcloud or IFTTT?

Apart from the mechanism, would you be able to help with design, coding or architecture as I would probably need some help figuring out what the best generic way is to define the app so we can integrate with other services down the line.

In any case, great so see support for this topic as I think there are awesome opportunities for Nextcloud to gain even more traction, even in the enterprise sector.

Just came across this new project for NodeRed Nextcloud integration:

hi guys, is there any news on this topic?

Nextcloud needs to purchase a license if they wish to integrate with IFTTT. It costs $20,000 per year to setup, and would need to be sorted out directly with members of their company.

Maybe a partial solution to your needs could be the new Nextcloud Flow, that should be available in Nextcloud 18 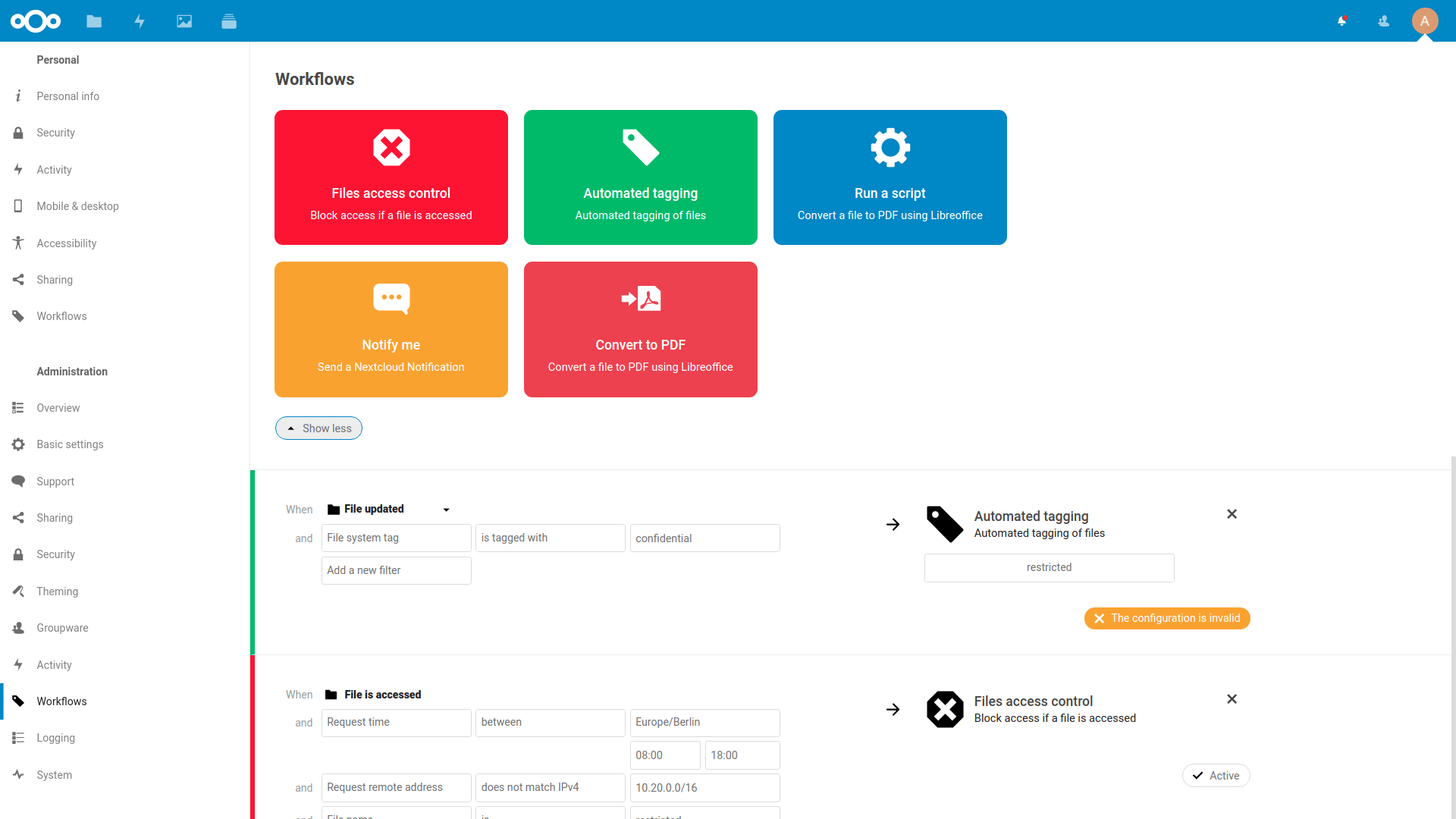 Nextcloud is the most deployed self-hosted file share and collaboration platform on the web. Access & collaborate across your devices. You decide what happens with your data, where it is and who can access it

So, if this were implemented it would require Nextcloud set up an IFTTT subscription, which was $20,000 annually when last I checked. I haven’t looked into it further now that IFTTT is switching around their product, plus I do not work for Nextcloud.

Obviously $20k is a guess after emailing some questions, could be more. But, it would also be immensely useful for users of Flow, users of Nextcloud and users in general to connect the API’s of Nextcloud with countless other apps.

Does Nextcloud want to pay that money? It is not really cheap and we do not have enough info to know if it would be worthwhile. Consider that I did not see a huge request for this feature…

Main reason I didn’t respond to this thread for over a year after learning about the cost.

Does it fit with the ideas of decentralization and protection of users’ data? I do not think so… In addition I doubt that there would be a lot of corporate users willing to use this kind of service, but maybe I am wrong

Honestly, what it does is expand API access to include every major application out there. So, the good is it makes it point-and-click easy to move data in/out of whatever application to/from Nextcloud Files/Calendar/Tasks/Notes/Deck/Maps based on any number of conditions. No open solution comes even close. You’ll no longer need to wait for Trello support to be added to Deck and connecting them is just drag and drop.

I’ve seen people requesting it on the server and forums for years, but no worries if it never happens. IFTTT has been a big player for a decade and adding it (or something like Zapier) is certainly not a requirement.

@just first of all thank you for your detailed explanation.

Second, about the open source solutions: I am fully aware that you opened tickets to ask for Nextcloud integration in the main open source solutions with low to no answers.
Yet I wanted to signal the future plans of Node-RED, as I think they contain useful information. Under the section Scalability of flows you can see that they are planning for the possibility of distributed Node-RED flows. It is long term planning, yet it could be a really good match with Nextcloud federation.

Also the interface customization possibilities illustrated in the Customising the Node-RED flow appearance section are really interesting considering the current “nerdy” interface of the program.

Of course this does not change what you said:

No open solution comes even close.

For reference about the possibilities between the two software

Under the section Scalability of flows you can see that they are planning for the possibility of distributed Node-RED flows. It is long term planning, yet it could be a really good match with Nextcloud federation.

Are you imagining the possibility of adding node-flows to complement Flow app scripting? It would make a lot of sense as a potential future expansion.

Of course this does not change what you said:

It does not change the difference between integrating Node-Red (flexible and fully open design) and IFTTT or Zapier (every major SaaS under the sun) in my opinion.

Are you imagining the possibility of adding node-flows to complement Flow app scripting? It would make a lot of sense as a potential future expansion.

I imagine that federated Nextcloud instances that have the possibility to define distributed Node-RED flows are something that could be an intriguing offer!

I also see several obstacles to this result:

Do you have any idea of who of Nextcloud could be interested?

Do you have any idea of who of Nextcloud could be interested?

I do not, but it is certainly something to keep track of as it develops.