I am running it on a physical computer with absolutely clean installation and without anything extra, just the default stuff what it comes with.

The dedicated computer is only running nextcloud, nothing else.

Following is the setup information,

Everything is working as it is supposed to. At least theoretically, but practically I am facing high CPU usage issue while users are backing up (auto) or downloading their images and videos via NextCloud android app. Not just that, even when using the web interface, similar issue.

Below is the screenshot of usage in my server. 2 Users are uploading via android client and me (3rd user) downloading via web interface. CPU usage is pretty high but speeds are still satisfactory but as soon as 4th user or device starts any uploading / downloading , it becomes a bottleneck in CPU usage and all devices / users starts to experience issues. 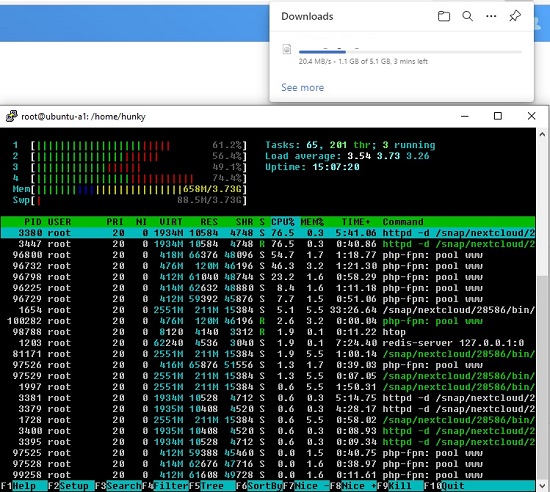 I did some searching and bit of reading with any topic on nextcloud and high cpu usage. Some of the pointers are with collab app / plugin but I don’t any such installed. Some are with php 7.x issues but here, I guess the nextcloud 22.2.0 snap installation comes with php 8 and needs no configuring (working out of the box) so chance of me messing up something in config is zero.

Although the setup is working but performance is really poor. Web Interface is slow to respond, speeds are fine but 3/4 concurrent connection is overwhelming the CPU.

People are happily running their NextCloud with Pi but what am I doing wrong here with my setup that a much superior CPU is struggling with 3/4 concurrent connections (file transfer activity)?

NextCloud documentation felt bit misleading since it has not much details about CPU requirements. Would be users should have been given some idea about performance issues with lower powered CPUs as it would be helpful to plan the configuration before hand rather than finding it out the hardware while spending hours into troubleshooting. 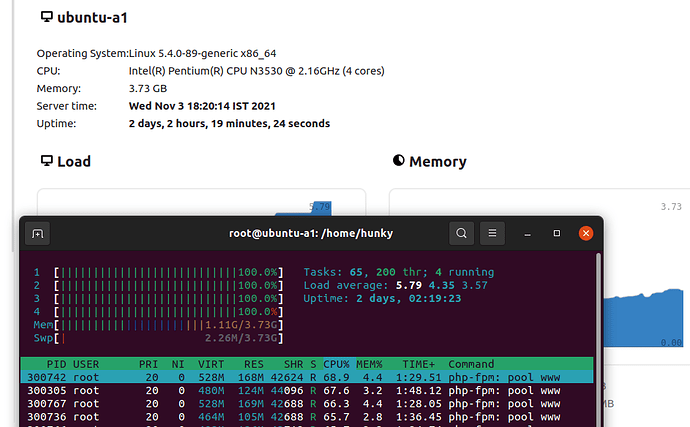 As on board more users and they hit the server with their first / initial round of heavy upload (regardless of Android client or web interface), the CPU usage is out of the roof

Those specs are extremely low.
A pentium laptop is a terrible platform for nextcloud as a server. Your router speeds are probably a problem, including running the server from wifi or regular 100mb nic. This assumes it is local network only and not over isp.

Never used the snap. But there is nothing superior about a 4gb ram pentium in terms of performance or stats. Definitely upgrade.

That is bare minimum hardware for even one user. And leaves no room for the office suite or anything else. So, my honest suggestion is to upgrade to a more modern tower machine with gb ethernet, more ram, an SSD disk for faster access. It’ll be a night and day difference; you’ll be extremely pleased.

Good luck with it. The problem is your hardware as it cannot accommodate the needs of the four users with any speed or reliability.

Good luck with it. The problem is your hardware as it cannot accommodate the needs of the four users with any speed or reliability.

Thank you for responding. I would like to draw your attention to the last part of my original post.

I did figure it out.

However, there is no way of knowing it before deployment by reading your documentation.

Zero information about CPU requirements or any recommendation like what it says about RAM and other stuff. If you may please notice, this configuration is well above your published system requirements.

It’s very unproductive and waste of time to figure out about under powered hardware choice after deployment by spending hours into troubleshooting. Better documentation would have helped me or anyone like me to select a better & more capable CPU to start with.

I have secured a Dell 7020 Tower PC with Core i7 4790 to move the installation there to solve this CPU bottleneck issue. If the system requirement documentation had a better clarification about the CPU, I could have selected a better one to start with. That would have saved me from a lot of hassle.

Kindly consider updating your system requirements page with better information on CPU. For example, like you have with RAM.