I am using the nextcloud server (Debian) and the nextcloud windowsclient. In the local datafolder there are log files named owncloud* 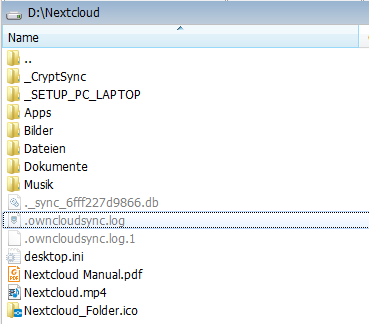 Shouldn’t that be changed to .nextcloudsync.log. Or to keep it simple and universal just .sync.log

Currently, there is only a nextcloud-theme to the owncloud-client and I don’t know if that can be changed easily, you can though report it here: https://github.com/nextcloud/client_theming/issues

At some point, nextcloud wants to fork the owncloud client as well but there is no announcement yet when this will happen.

I came across that topic as I currently migrate fro an owncloud server to a new nextcloud. And I got confused, that the nextcloud Client on Mac too uses the owncloud log file.

So for me two “different” clients use the same log file, as I use one local folder for both systems for the migration process.

Would be cool if the nextcloud client uses a nextcloud log.

I just searched the github repo but didn’t find anything in the code, so this is probably not changeable by theming. You’d probably have to take the NC theming, when you then add the code sources you have to manually change the logfile path (https://github.com/owncloud/client/search?utf8=✓&q=owncloudsync.log&type=) and build you own client.

Nextcloud announced client-side encryption with their own client, then it will hopefully easier to implement changes without referring to ownCloud each time:

Originally published at: https://nextcloud.com/blog/nextcloud-introducing-native-integrated-end-to-end-encryption/ [caption id=“attachment_3121” align=“alignright” width=“340”] [End-to-end encryption in Android in action] Android client encryption in action[/caption] We are excited to announce what is probably the all-time most requested feature in the 7-year history of our open source file sync and share work: End-to-end Encryption, also called Client Side Encryption. We designed it to wor…

Hi, sounds cool. For me it is not that much of a problem currently. But if you fork a project and users migrate to the new for it is confusing to have such left overs

In my humble opinion, it looks like all the work so far is mostly just spent chasing and renaming an open source application.

This is the case for the desktop sync client at the moment. They work on a new client-side encryption that will be new to Nextcloud and this will make a difference to the ownCloud client.
However, the picture is very different when you consider the server version or mobile apps. Especially on the community version, there are more features than in ownCloud (file drop, workflow, file firewall, …).

At some point, I hope to see a reason why nextcloud even exists - its unfortunate, I wish the team members at nextcloud had just stayed at owncloud, and spent all of this energy improving the program instead of theming it.

Yes indeed, but if your company does not let you do the work you’d like to do, you can either accept that or leave. Some previous decisions were not in favor of the community (removing calendar/contacts from core (and abandon their development), don’t improve update procedure, in-transparent decisions for community, …) so it could be very frustrating for independent app-developers.

The forking surely took a lot of resources, Nextcloud had to copy everything, rewrite certain proprietary parts and build a new team. ownCloud lost developers and had to hire new staff which took some time.

On the client they started the work (https://github.com/nextcloud/client), there is a preview for E2E for Win and Linux: https://download.nextcloud.com/desktop/prereleases/E2E/

Hello @Lloyd_Summers.
First of all, I don’t want to lecture you. That is not my intention. If I do come across like doing so, I’d like to apologize and use the “not a native speaker”-card

Also this is my own personal opinion and absolutely off-topic.
Oh and before someone slaps me silly with the CoC or something: I’m not affiliated with Nextcloud, opinions are my own. Yadda yadda yadda. You get the point.

In my humble opinion, it looks like all the work so far is mostly just spent chasing and renaming an open source application

I think that’s heavily subjective. The two project have heavily diverged IMHO.
I did some unempiric digging over at GitHub.

Now again: this is disgustingly unempiric. But my intention is not to publish a peer reviewed paper, but merely to get a feeling for the topic.

The recent ones show up because someone referenced OwnCloud. To get actual rebranding PRs you have to dig deeper. Much deeper.

If you take a look at the GitHub pulse of server and
client_theming you see a vastly different amount of work being put into the two projects.

I mean no offense, it’s just every issue I’ve ever had with owncloud still exists in nextcloud

Huh. Then we had different experiences. For example: I can’t even remember the last time an Nextcloud update blew up on me.

Updating ownCloud was something straight out of H.P. Lovecraft novel. Even minor updates forced me to restore from backup and wait a few point-releases. Not to mention LDAP / AD.

But then again: That was a long time ago, in terms of software development.

@frank did a talk on the topic at FOSDEM2018. Given it’s a solid 50 minutes I don’t expect you to watch it.

My take on it is that it was a moral choice. And I personally deeply respect that. I don’t think it’s easy to say “Fuck! We messed up and can’t go back.” Then essentially “steal” your own team and start over.

I’d like to see a merge in the future, simply as to get more shi stuff done. But on Nextclouds terms

So in conclusion:
The choice of software you use is for most part yours to make. Essentially they’re tools ment to assist you.
Don’t let feelings dictate that. Be pragmatic about your choices. Don’t get caught up in "x is better then y because …" type of discussions.

What matters at the end of the day is that you use software that caters your needs. x doesn’t do that? Move on to y. Just. Don’t be a dick about it (and I’m not implying that you are).