Tonight I made the following trip : snapshoted LXC container, update from ubuntu server 15.04 to 16.04, migrated from OC9 to NC9 and then tried and succeed to update to NC11.
Unfortunately, I had to rollback as I noticed that each page of the website was taking a lot of time to load.
For instance, just after login, it takes more than 40s for the file page to display.

(image when I’ll not be a new user anymore…)

I successfully rolled back to NC9. I’m wondering if I’m the only one with this behavior ?
Would anyone have some hints to share on what might cause this and how to fix it ?
Note that I didn’t make any modifications on the server setup between NC9 and NC11.

Thanks in advance,
Guillaume

maybe something with brute force detection

30 sec. to wait before login since update 10.0 support

Hi all, I have updated today my nextcloud to 10.0 Stable from 9.53 Stable. Everything got OK but a problem came : When I log in on Firefox (same thing for Chrome), I have to wait 30 sec before files page appears. I hadn't this problem before. I think it appeared when I have created some applications passwords I have deleted after. Now, I have deleted all the password for applications, but the 30 seconds remain... This is my access.log [25/Aug/2016:18:19:31 +0200] "POST /index.php/login H…

While you were upgrading, did PHP increase to v.7 also?
Anything in your Apache/NC logs?

There’s not much to go on at the moment.

Indeed, an update seems to have happened on my Nextcloud Box, which says it is at 11.0.0 and the Contact app was no longer available, which seems to happen with every update. I expect there’s someplace in the Admin screens that would tell me when such a thing happened?

I immediately noticed that the web interface was way slow.

Thanks for the replies!
@JasonBayton : indeed, as part of the move from Ubuntu server 15.04 to 16.04, my php has been updated to 7.0.
I see that php 5.4+ is required. I don’t see that php7.0 is not recommended.
Based on your answer, I should expect some issues with 7 ?
Note that I was using Redis with Owncloud, and that I had to update it (install from source) after the move to php7.0.

Nothing specific in the access logs. I’ll have to check the NC logs.

If you have no other recommendations following my few comments above, I’ll try to downgrade to php 5, update back to NC11 and will give some feedback here.

Am running NextCloud 11.0 with PHP 7 and Redis 3.2.4 without issues, so I would start by removing php5.4, make sure your system is up-to-date and see if there is any process consuming your available memory.
Do you have any proxy? if not have you try accessing it using the local IP instead of domain?

Based on your answer, I should expect some issues with 7 ?

No, just checking it happened. PHP 7 is great.
If there’s nothing in the logs it’s a bit of a conundrum.

Does it might be caused by conflicts in browser cache? I have the same issue, but only in my usual browser. In others, in which I hadn’t load Nextcloud since a long time ago, loading is as fast as ever.

I never use IE. I tried my Nextcloud Box with IE and it still seems much slower than before.

So, after a couple hectic weeks, I’ve found some time to get back to this.
Here is what I have done

I have cleaned my setup regarding to Redis (went from manual install to using ubuntu package). I have moved to using Redis for locking (was not enabled before) and APCu for caching, per the help recommendations for a single server setup. .

I then followed @gustavomrfz idea about browser cache.
Here, note that I use Firefox. I emptied the cache ==> not better
I used a “blank” Firefox profile ==> not better
I then tried with Chrome : way faster ! Even IE11 displays the first page after login faster than Firefox.
I’m not tech savvy enough to know what is the key difference between Chrome and Firefox.

So, to summarize, and to give the facts:

Note that once logged, the navigation in NC continues to be way better in Chrome than Firefox. For example displaying the “Activity” app takes roughly 4s in Chrome and 13-15 in Firefox.

Used the Dev Tools in the incognito mode of Firefox / Chrome (no extensions/modules/cache) to measure the time. This might be interesting: 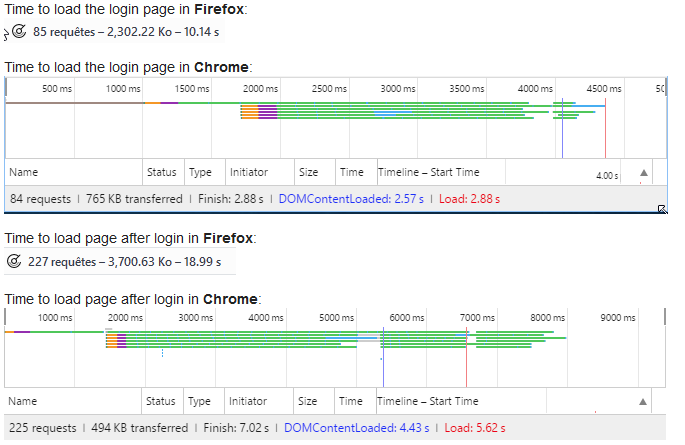 Per my first post, remember also that I didn’t see this behavior with NC9 nor NC10 (I mean, loading in Firefox wasn’t that slow in those versions).

I am having the same issue. Firstly the load of the login page is slow in my usual browser and rather fast in EDGE for example. Secondly the load from login to interface is very slow. I tried fixing brute force protection, but its not the issue.

This is probably because asset pipelining was disabled because it caused problems for quite some users. We’re working on fixing these problems and it will be re-enabled in a future release.

For most users, this won’t create a noticeable difference. As you notice, it is handled much better by Chrome than by Firefox. There might also be server settings you can tune…

Thanks for your reply !
I’ll be patient and use another browser until this is fixed.

There might also be server settings you can tune…
Has Anyone an Idea what i can tune?

I’ve made an update from NextCloud 10.x to 11.0.1 and i have noticed the same issue.
With Crome it is a little bit faster, but i could fall asleep until the Login-Window appear…
And after login with TOTP it still needs 10-15 sec to show my files…

So, can i do anything? Is a setting known?

Sorry, I don’t know, sadly. If anyone here finds out, share please…

I too am experiencing slow login and general navigation around NC 11.0.3. After login, clicking to see a calendar or gallery or some other module takes around 15-20s of looking at a blank screen before it renders.

I did a clean install of NC on my web hosting account (hosted at Siteground). I use Firefox 52.1 on openSUSE Tumbleweed. The slowness is experienced on two different PCs so I suspect it’s a server or NC issue. Previous to installing NC 11.03 I was using Owncloud 7.0.2 installed on the same web hosting account with no slowness or lagging.

Has anyone managed to find a solution to the lagging?

I have a similar issue with slow load times in Firefox as well. The site takes one whole minute to load all the files (mostly .js extension) before I can do anything. Once I hit the reload button, to check for new files for example, it takes another minute to load the whole app from the web server again.

What’s interesting, Safari on Mac does not suffer from the long load times after I hit reaload. It seems to load most of the assets from cache.

So I’m not sure if this a problem with Firefox or Nextcloud. Just thought it would be interesting to leave this info here for reference.

I was wondering if anybody got any update on this.

Just completely wiped my NextCloud instance and threw away the database to start with a fresh install of NextCloud 12.0.1 but it is still really slow to load even without any files in there.
On a different subdomain I have a WordPress site that responds normally.

Please let me know what kind of info you need from me to be able to troubleshoot.