I have a Nextcloud running on an Ubuntu Server 20.04. Before the Redis installation it was working perfectly, but since i configured the unix socket redis is using, the nextcloud crashes on every visit.

In the error log of the apache Server i found this →

(Is the matching PHP module installed and enabled?)\

Make sure that the PHP redis module is actualy installed…

…also make sure that the following is set in /etc/redis/redis.conf

…and add the redis user to the www-data group

Don’t forget to restart all services or reboot after you made any chancges.

The php module was installed before, i made the changes again, because they were already configured, rebooted the VM but nothing changes… The Nextcloud web interface says internal error, and the error.log the same like written in the topic…

I dont know what it else could be…

What are your Redis settings in config.php? 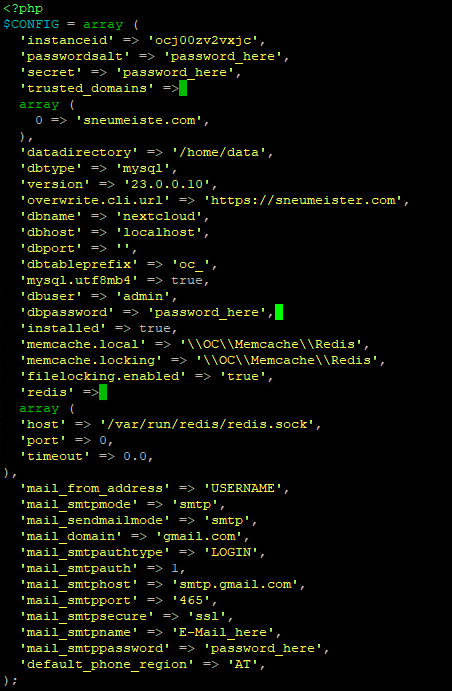 Here we are… I changed the passwords everywhere, so dont wonder about it.
The most common mistake to have redis-server.sock in the config i changed before weeks.

Edit: Do you know there is a typo in Trusted domains? An R is missing.

The permissions of the socket are followings:

Yeah there is a R missing, i deleted some letters, thats not the original, but thx.

I added the ‘memcache.distributed and the dbindex’ but nothing changed
It still doesnt work.

on commandline, does redis respond with a pong?

Nextcloud web server is running as wwwrun or www-data etc. Therefore you have to make sure that the relevant user is allowed to access the socket. This can be done, e.g. by adding the user to the redis group.
Please use the search function of this forum to find more details. This question has already been asked and answered multiple times in the past.

I already had this lines you wrote in my conf, but the cli ping was refused…

I already had this lines you wrote in my conf, but the cli ping was refused…

…but did you also add the www-data user to the redis group…?

@j-ed: The webserver on Ubuntu is running on www-data:www-data as bb77 already wrote:

Because the redis.sock file is there and owned by redis, this looks indeed like a permission problem.

You can check the group members of the redis group with…

Or just execute the usermod command I posted. It does no harm and has (most likely) to be done anyways

To make sure it isn´t a permission problem?

The www-data is in the right group

Then we have to look at Nextcloud or php. Php-redis is installed?

In Nextcloud docs I see:

The differences are: [ ] instead of array () and single backslashes \
Maybe something changes the way this is working?