I was recently trying to find a good WEBDAV drive mapper for Windows and went through the usual suspects like Netdrive, Webdrive and the likes, but they are all commercial software now. i’ve been manually mapping drives from the command line in Windows, but sometimes it just doesn’t work as expected.

then i found RaiDrive (https://www.raidrive.com/) and it appears to work really well. you can configure up WebDAV connections to your Nextcloud and also easily enable/disable the drives with a single click. i’ve tested it against Nextcloud 11 and Nextcloud 14. both appear to work with no issues.

this is a great option for when i want to grab files from my laptop when i’m on the run and might want to grab a whole folder of stuff, or perhaps to upload some content.

RaiDrive can also be used to map to other vendor cloud drives as well as supporting SFTP and FTP.

i have no association with this company. I just found their product to work very well and wanted to let others know.

price = free. they appear to have some sort of “business version” planned, but i couldn’t find any information about it.

i’ve just done a test now - uploaded a 5GB ISO file with no issues from my windows 10 pc. the only issue you need to be aware of - and this is a WEBDAV limitation, not a RaiDrive limitation - is that once you get to the end of the copy operation, it appears to stop. but this is a visual thing - the file is still actually copying (you can confirm this by going to task manager / performance / ethernet and check the bandwidth being used).

it doesn’t matter which program i use to connect windows to WebDAV on Nextcloud - the same thing still happens - even if i map a drive natively from windows, so i ignore this since it’s a WebDAV thing and not a RaiDrive thing. it’s only cosmetic and as long as you are aware of it, it’s not an issue.

does it only happen to me or are you really forced to enter your login-credentials on every reboot?

apparently based on some open source kind of thing (needs to be investigated).

as for now i can tell that raidrive is using open source tools in it’s code but isn’t really open source itself. it’s just freeware so far.

Hi,
I can not get RaiDrive to work with a nextcloud installation. The webdav instruction as nextcloud says is not accepted. Just https:// cloud.domainname can be in the field. Username and password.

Then Raidrive tries to connect with https://username@cloud.domainname. An error is the result.

RaiDrive works however fine with my Synology.

Oh boy. 405 error due to missing path in RaiDrive.

I did not see that I had to put /remote.php/webdav/ in the ‘path’ .

Beginners error …
Works now like a charm, including allocated space.

Seems like a lot of Nextcloud frustration (locked files, slowness, waiting for drive listing) came from using it in combination with WebDrive.

RaiDrive really works like a charm! This looks like the missing WebDav module that Windows should have had from the start.Thanks @wizdude for the great tip!

does it only happen to me or are you really forced to enter your login-credentials on every reboot?

not for me. i’m using RaiDrive 1.4.0 and it reconnects after reboot with no issues.

no, you aren’t - just uncheck “login with different credentials” and it’ll work like a charm

I have really poor performance with copy files into my nextcloud with RaiDrive,
Even in the same LAN, it never goes more than 1Mo/s
The Client is on Windows 10, my server is Ubuntu 18.04, Ngnix, Php 7.2, MariaDB with RAID 1 and very capable disks.

What are your speed write when coping files for you ?

i get really awesome speeds on my local lan. i have a windows 10 desktop machine and my software specs on the server side are pretty identical to yours except that i don’t use nginx - i use apache. my server runs under VMware as part of a vSphere infrastructure, so disk speed at the server side is pretty good.

remember that the reported windows explorer speeds are totally invalid when using webdav. you need to look at the performance of the actual network adapter.

see below some results of copying a 1.8GB file from my workstation to two different nextcloud servers on my LAN.

here is the file being copied to my older Nextcloud 11 box: 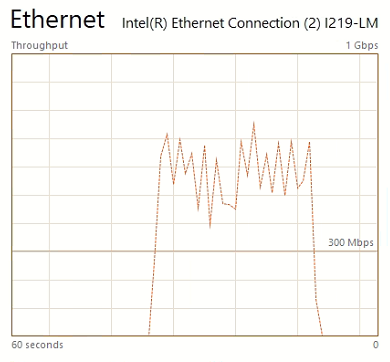 and here is the same file being copied to my newer Nextcloud 14 box: 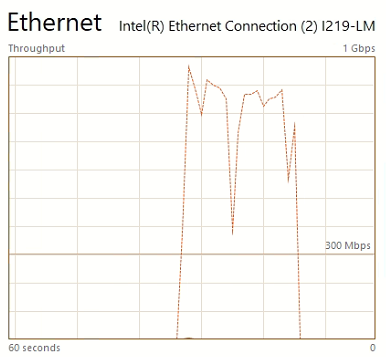 if you are getting significantly lower speeds (and you’ve validated this on the network graph in task manager) then i would perform some non-raidrive and non-nextcloud testing to ensure the issue doesn’t lie somewhere else in your machine or network.

for comparison, here is the same file being copied from my workstation to my synology NAS: 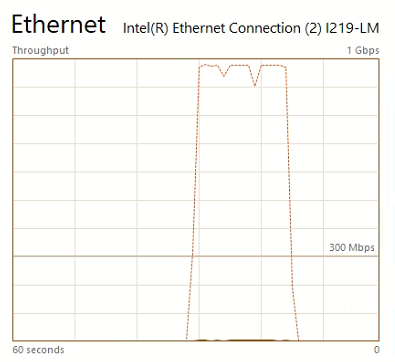 and being copied up to a windows server (i think this is a 2008R2 box) that is running on the same VMware vSphere infrastructure as the other two nextcloud boxes i tested above: 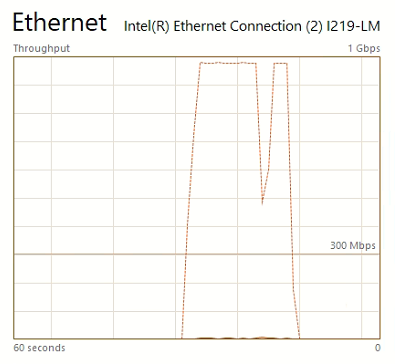 here’s a quick speed test performed using hdparm on each of those two boxes:

here is my nextcloud 11 box. the back end storage is one of my SAN’s

and here is my nextcloud 14 box which is using a local RAID array: