We are happy to announce the release of Nextcloud Deck Android 1.8.3 #apps:deck !

This is one of the biggest releases since version 1.0.0 which fixes a lot of bugs and ships those features among others:

Our next release will probably feature

and will be available on the beta channel soon. 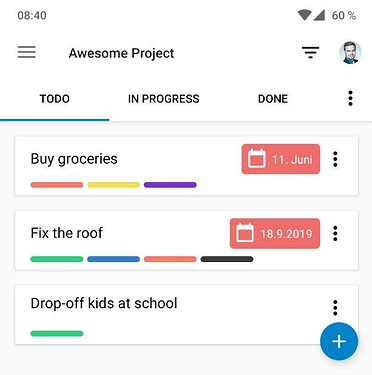 Hello, I started to use desk but missed the opportunity to have a task level like in asana and so stopped using it. Is a task level planned soon?
Also, why is this only for android users? I am a bit confused - is this only for the app?
Thank you for an update also on where Desk is right now on the desk top version.
Warmly
Angela

I assume you mean “Deck”? (just to make sure, we are talking about the same thing

Depends a bit on what exactly you mean with “Task”:

Also, why is this only for android users?

Because the Android-App is developed and distributed by a community which is independent of the Nextcloud GmbH. And “we” are not interested in developing apps for a closed source operating system. Of course everyone is free to start developing an iOS app

is this only for the app?

Yes, this blog post is only for the Android-App. The server app already supports most of the mentioned features.

Thank you. I do understand the reasoning around the closed system. I guess I need to have another look into the server version. It’s quite a while since I tested it. And yes, I mean deck