The output of the last line was
ocr enabled

But unfortunately now the hourglass runs forever on “Enabled Apps” in the apps settings.

I only can do a
sudo -u www-data php /var/www/nextcloud/occ app:disable ocr

This will bring back the “Enabled apps” page.

On the “Not enabled apps” page, now i have this: 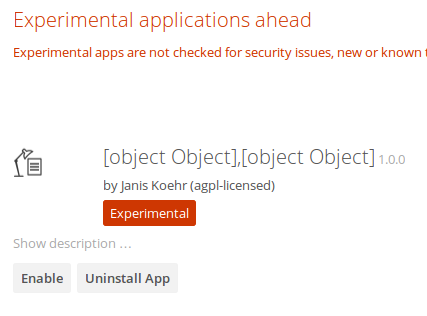 Actually this is a weird behaviour, as it doesn’t come up for me, but it does for some other users. Are you sure that you have the latest nextcloud version installed? 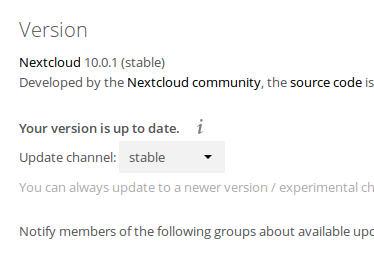 I think it is. But the problem is that I cannot reproduce the bug with my clone of the latest stable10 version from github/nextcloud.

Maybe I will give it one more try tomorrow. Sorry that I cannot help you atm.

Now I tested this weird thing and I assume this bug comes up because of the following:

Initially there has been a bug report for my ocr app 20th Sept which came up with the same behaviour.

After this i figured out, that my info.xml was likely newer than the nextcloud interpreter for the info.xml, although the official XSD file specified multiple language options as a possible solution.
I created this issue:

After this issue was fixed, tested and approved for NC10.0.1 I didn’t expect that this would still be a problem.
As of this I always referenced the mentioned issue and thought, that these people didn’t update correctly.

But I guess the problem is likely that the downloadable version of nextcloud from https://nextcloud.com/install/
isn’t up to date:
This is the information of the “OC_Build” Variable in the version.php:

and this is kind of old. It might be one of the first 10.0.1 stable versions, but there have been a few backports and transifex-updates after that date. I guess that this is the reason, why many people still recognize this issue. The bugfix isn’t available in the download build. only in the stable10 git-branch it is available.

Maybe it is somone here, that can give some more information regarding this?
@LukasReschke I don’t know if you are the right person to contact. but maybe you are a good start point?

Maybe it is planned to bring the 10.0.2 RC in to the downloads page after it is tested successfully. If this is right, I would suggest to wait for this update and just update nextcloud. Then it should work, I guess.