I don’t understand why it requires a user interaction when both files are identical?

Another sync conflict on the desktop version, there is no way to solve it. I guess it has the same scenario - both files are identical as I am pretty sure there is no other file exists with the same file name. Click redirects to the dashboard of the web version, so it got stuck with no ability to solve it: 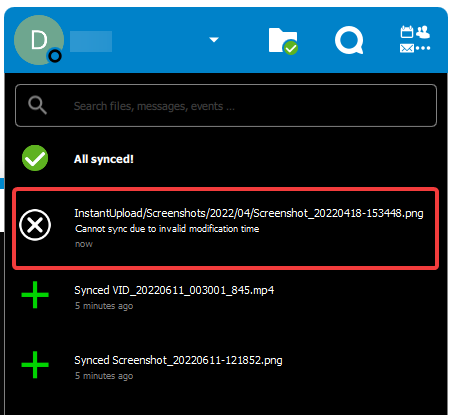 I don’t understand why it was designed to work like that?

It doesn’t check the content, probably just a modification date or something like that and if there is a difference between the client and server version, there is a conflict.
You can check on the bug tracker (Issues · nextcloud/desktop · GitHub), if improvements are planned and if not, propose some ideas how to solve it.

Another sync conflict on the desktop version, there is no way to solve it.

I had a similar issue years ago, and it turned out the files that were conflicting were Read Only. Check the permissions of your files, it’s possible at least one of them are Read Only.

Also, it could be that a file isn’t read only, but Nextcloud doesn’t have permission to alter the file. See if the file belongs to a specific group or has a restrictive ACL attached.

You mean the lack of permissions is on the device or on the server? My server has data folder which has proper permissions setup for all files. I don’t think it should be an issue. Regarding the device so I assume it tries to override the file? But why when both those files are identical? And the sync was from the device to the server.

So I still don’t understand the issue. Sorry but you explanation does not make any sense to me.

You mean the lack of permissions is on the device or on the server?

I mean on the device. My Nextcloud server is a FreeBSD x64 machine, and the read-only files were on Windows machines (I keep my desktop and laptop synchronised).

I copied or moved some read only photos and office documents into a shared folder on my Windows desktop, and they synched to my laptop. They would then keep throwing conflicts (notified by the Windows Nextcloud client) whether I altered them or not.

I don’t know why they threw conflicts, since they were identical and not altered. But removing the read only attribute from the files, the conflicts went away.

I don’t understand why it was designed to work like that?

Are you using the Cloudflare reverse proxy?

Man, please try to explain it to my wife. She says the onedrive was working without any issues, but nextcloud constantly shows some sync errors. So she angry on me. So I don’t know what you are trying to explain me, but errors are always bad, so it means something is not developed in a way how it should be.

Man, please try to explain it to my wife.

Not my problem, I didn’t marry her!

it means something is not developed in a way how it should be.

Again, I didn’t write the code, I’m just telling you a situation that throws conflict issues. You haven’t said whether this applies to you - do you even know how to tell if something is read only? I have no idea what platforms you’re using.

You’re making it very hard to help you.