Webdav doesn't work with TOTP authentication (even with App password)

I recently enabled TOTP and everything worked fine, until I tried to access my files using webdav.
I properly reconfigured my webdav client, using an app password, but it won’t access my files. The client displays : “HTTP Error: Unauthorised”. The server shows a few errors in the logs. You can find both screenshots linked to this message.

I tried to disable TOTP authentication to see if it was really the cause of the problem, and I could now access my files.

Has anyone got an idea? 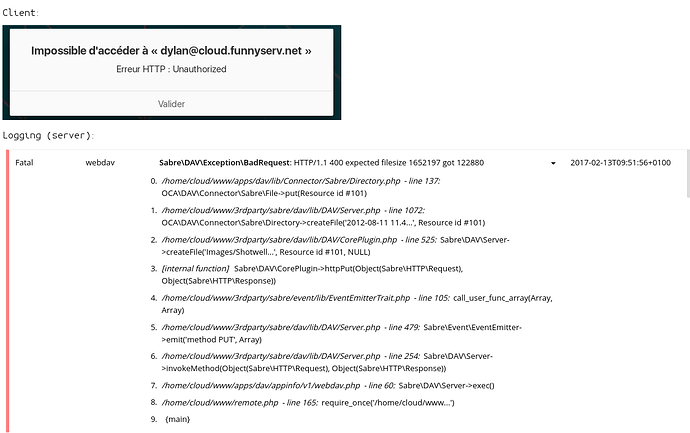 Thanks for your answer, but as I said, I’ve already tried to use an app password, unsuccessfully.

if you disable TOTP, does then the app-password work too?

I just tried and it seems to work.

So there is no way to make it work with webdav?

can you explain how you use the App-Password? For me it works very good with every client.

I open the menu, then Personal -> App passwords, I create a new app password (which I called “Fedora Online Accounts”), and I use the generated password when authenticating in Online Accounts in the settings panel of gnome.

Curious. I can’t try it with Linux desktop, I use Windows. Has the Server any error log?

I have linux too, and used cadaver (a command line webdav-tool) and thunar (in XFCE) both worked with totp and app-password.

Only the logs provided in my first message, which appear when TOTP is enabled.

I have same problem too

I’m having the same problem. Can’t get webdav to connect from Thunar / Gigolo when TOTP is enabled even though I’ve generated an app pw. Simply says “Login failed…” in the logs

which version of nc are you using?

Is your username correct? I use IMAP for authentication with the domain set in the configuration. Depending on how I log in the username that the app passwords are created as changes

Hi, it did not work for the normal mount command, however after putting the credentials under /etc/davfs/secrets i was able to mount the folders

Same Problem. My theory: I connected to the same account before without totp.

I tried with another account where i used totp at first connection and everything went fine.

…facing same issue, I can confirm

Both users have a device/session token (not using their nc password).

Does it work for an existing user but on a different client system (so perhaps the client system somehow tries to use the old password).

Here’s how I tested:

Then, I tested another client: