Hi …
a couple of days ago, Webmin offers 4 updates, I didn’t do a screenshot … sorry.
After reboot the system is hanging. Even trying the recovery shell is not usable, because while typing some commands the second picture is coming up,of course without the script header.
Since I have an unmounted drive (in Windows) for the Hyper-V I can’t go back before the update.
So I have tryed a new installed Version. Everything went fine, loading the script is fine, but after the reboot … see picture, even opening a second Terminal is starting the script and no break is possible.
That’s the same like it was for the running nextcloud. 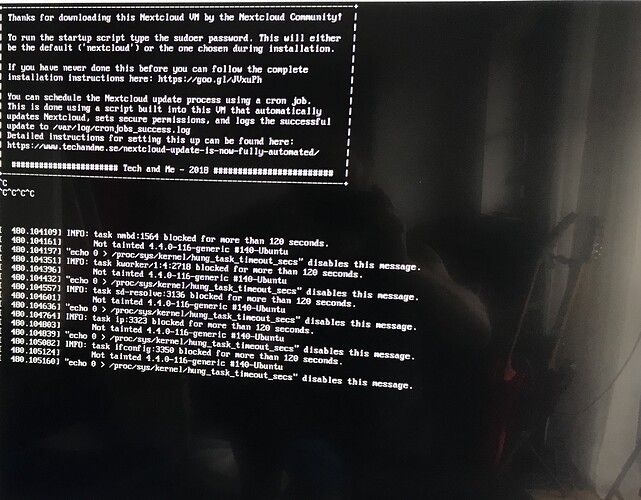 P.S @enoch85 just for information, it seems that I’m the only one with that problem?

Hmm, yeah you are the first one to report it. I released 13.0.1 yesterday in 5 different versions, and none of them showed this error.

Today I found time to do some checks an new try …

It seems it is again your network manager who causes the problems.
I have done a new setup and the machine was crashing during the copy netconfig to .old

With recovery mode, I was able to to have a look at the log files and copy the old netconfig back, but the script is directly killing the netconfig and so it is pretty useless.

this is the same behavior as before at my other PC, first I’ve used an AMD Kabini APU at W10Pro and now I have bought a used Lenovo Thinkcentre with i7 Quadcore, running also at Windows 10 Pro.

I’ll do a complete installation tonight for a customer running the Hyper-V VM, so if there are any errors I’m sure I’ll notice them.

Ping me if I don’t write back in one week.

Have a look at the lines counter … 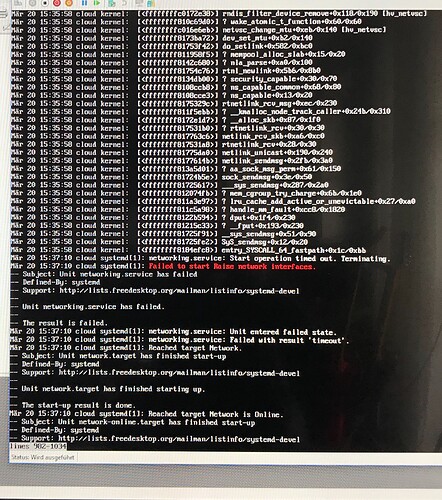 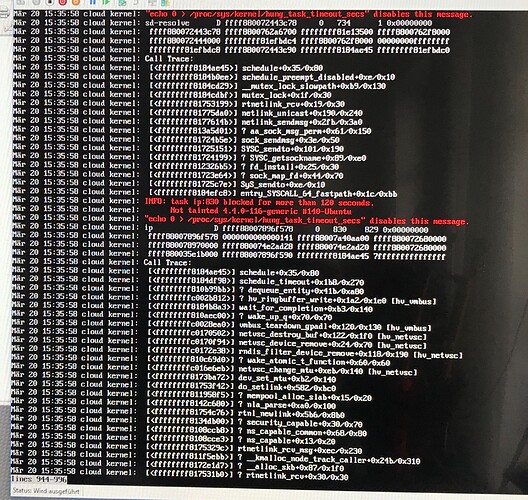 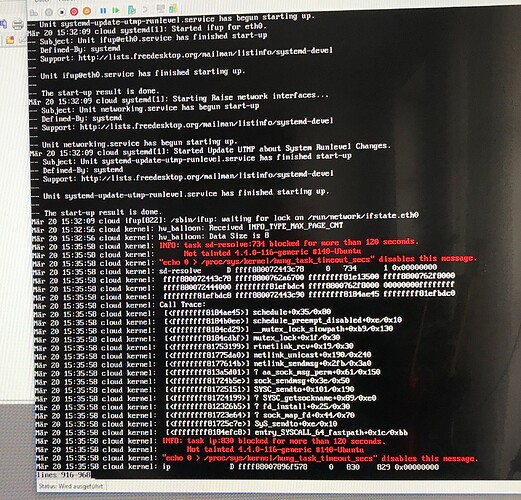 i have disabled the download ip.sh and later the bash ip.sh and it is working for me again …

Yeah, in the new set-script I will ask the user to run it separately. Best practice is using DHCP and lock the MAC address in firewall anyway.

The static IP stuff has been in the VM since 2014, it’s time for a change!

But keep in mind that the standard configuration of the network at hyper-v has no static mac-adress. So the user of your hyper-v image has to set up the nic mandatory to a static mac adress.
I have done this always and the router was giving the vm always the same ip …

I’m experiencing the same problem. Not sure what prompted the issues but even going back to a known good backup of the VM is displaying the issue. This would lead me to think it’s a windows update or some description. I’ve spent most of the day trying to get it up and running again before finding this post. I clean install isn’t working either as the install stalls on setting up virt-what.

The other trouble I have now is that whenever I try to edit a file the system seems to hang.

I’ve searched for download ip.sh and bash ip.sh. Where do I find those files and how do I go about disabling the download?

Cheers for any help.

The problem is imho the network manager used in the vm.
Since SSH isn’t working anymore, you have to use the console of the VM.
Reboot, or in my case I have to switch off …
If the UBUNTU screen is coming up press a key … I have used cursor down.
There is something like emergency shell, choose that, you are already root.
go to /etc/network there you have to edit interfaces, of course you can type
nano /etc/network/interfaces
This is the interfaces of the VM

This is a standard interfaces, you can use it, but you have to give the NIC in your VM a static MAC adress and your router must give the VM always the same IP

or you can try to use it in this way

The 20GB pay Version didn’t never work for me. Also I have more than 200K of Music Files in the Cloud, a lots of Pictures and so on.
For me the best way was
download the ubuntu server cd
create a virtual disk (fixed Size is much faster)… even better use a separate HDD and unmount it in Windows Diskmanager, so you can connect it in the VM Properties.
connect the ubuntu.iso to the VM and install a minimal virtual version.
During setup use directly the user ncadmin and name the computer as the subdomain you are using i.e. cloud if your domain is cloud.xxxxxx.com
then use this
https://github.com/nextcloud/vm#installation

Imho the script is now modified and will run without problems.

Mate. That worked well. Thanks for the help.

Took me a while to get back to it as the console was cutting off the bottom and I couldn’t read the errors properly. In the end I read your post properly and started the journey from the recovery console and then made the file system read/write. After that it was smooth sailing.

If you find any bugs, ping me so that I can fix them.