Hi,
First thing: I installed Nextcloud via Yunohost which is an application to self host and install server apps really easily, so maybe my problem is related to that instead of a Nextcloud one, but I ask just in case anyone here knows how to fix it. I already opened a topic on the yunohost community forum, but nobody seems to be able to figure it out (it’s in french, sorry).
My problem: I am unable to install apps from the “Apps” menu : I have access to all my installed apps, but I cannot update them, nor install new ones. There is no categories on the left panel to access new ones. After the last update, some new apps were suggested in my notification, but when I click on it, it redirects to a white page which loads for a few seconds and then stops and stays empty.
Here is how it looks: 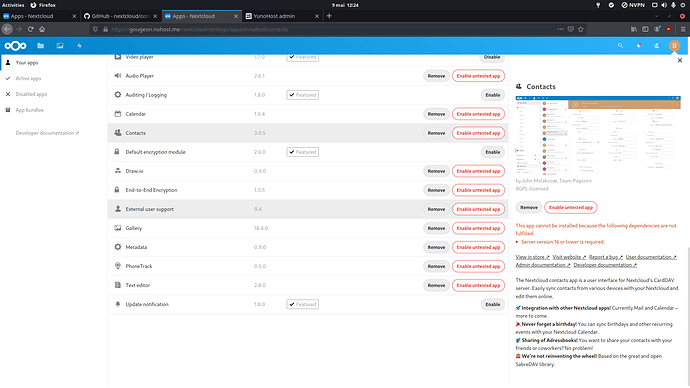 image1920×1080 252 KB
As you can see, there is no categories on the left to install new apps, only to access the ones already installed.

This problem occurred some time before I updated to 18.0.4, but it became worrying only after the update when I noticed some apps were not up to date and therefore not able to run on this new version.

I tried to be thorough, but do not hesitate to ask for any kind of clarification.

I ended up deleting nextcloud and reinstalling it. It was a bit tedious to set everything back as before but it did fix the problem!