The version number displayed in the software manager differs from the one Nextcloud client under General / About, even though I installed the client from there.

So which version number is correct and why does it differ?

Even though I select “Launch on system startup” in the Nextcloud client config under the General tab, the client doesn’t start automatically. (Other clients like Slack or Dropbox start up fine at startup on my system.)
It doesn’t get added to the Startup Applications, I need to add it manually (didn’t have to do it for the other apps like Slack or Dropbox).

I also noticed in this context, that the Nextcloud client doesn’t have a proper application icon. I also think it would be “cleaner” to just name the client “Nextcloud” instead of the rather long and complicated name “Nextcloud desktop sync client”, especially because there is no other desktop client for Nextcloud than the sync client.

As mentioned, Sync works fine. Just having problems with three menu items in the Nextcloud launcher.

Open Nextcloud in browser, Open folder …, and Help don’t work. When I select these menu items, nothing happens.

(The same menu items in the Dropbox client are working fine, and I assume they’re doing pretty much the same)

Launching the Nextcloud client via “Launch” button in the software manager does not work (nothing happens when clicking). 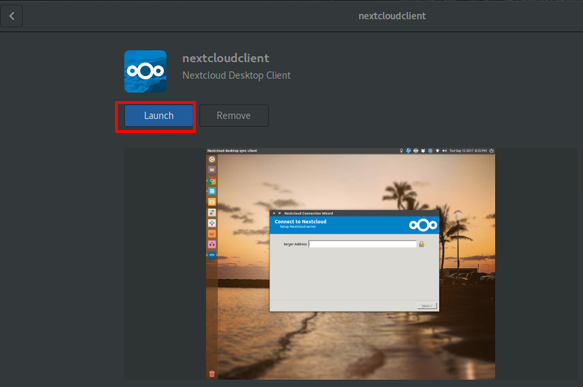 I wonder if these issues are specific to using the Snap / GUI software manager approach.
I will give it a try via PPA installation next week.

(I don’t have any problems with the Nextcloud client on Mac OS X.)

Thanks for your reply.

About 2) Yes, I checked that checkbox and it didn’t help. Even though it’s checked, it doesn’t startup at boot. Only starts at startup when I add it manually to the autostart apps.

About the naming: I’d rather call the server component “nextcloud-server” then or similar, if there is a conflict. Mostly, users would probably go to install the clients via Snap/GUI software manager (while server installation is a sysadmin task anyway and wouldn’t be done this way most probably). But I’m not a packaging expert either.

I agree about the preference of UI installs and configs, same with me.

The questions and mentioned points aren’t mainly about my own usage, I get it to work somehow, no problem. Just wanted to compare how smoothly it installs and works without problems from the way a normal end-user (non-IT person) would use it.
Just looking at it from an end-user perspective / UX standpoint who just want to get the solution working without having to know details (UX convenience, also compared to other apps). Like non-IT guys who mainly use UIs and aren’t that deeply involved in the Nextcloud community. I assume they would go through the software manager and use what’s there.

I will also try it using the PPA next week. Just wanted to share my experience going the Snap way on Gnome.
Maybe better if Nextcloud wouldn’t be available via software manager (at that point), if it’s not stable (but that might be out of hands of Nextcloud). Then it would “force” the user to go the other route (i.e. PPA).

I am having all of the same issues with the addition that syncing will pull from the server but not upload to it.

Had the same issue with #2, solved it by adding the snap in startup applications and now it works on login. 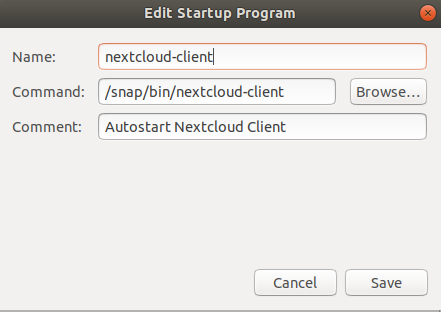 You are the person!!! Worked perfectly for me in Ubuntu 18.02. I have not tried it in Linux Mint, nor OSGEOLive, but THANK YOU!!!