Subscribing between Google and Nextcloud calendars 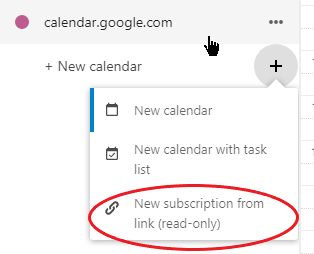 This has gone well except for past recurring events, which I understand is a current issue Long repeating events not correct shown on web-calender, if they begin before current view 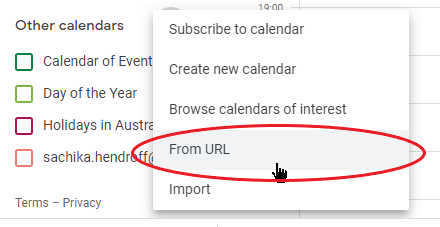 I should be seeing Nextcloud calendar events in Google calendar, but I’m not seeing anything. Have I missed something?

Well, that is interesting! Based on the default refresh rates for both Google and Nextcloud, this would seem to suggest that calendar subscriptions are a pretty useless feature for dynamic calendars as changes to ‘near events’ (within a week for calendars subscribed in Nextcloud, and within a day for calendars subscribed in Google) would not be picked up. No biggie, as long as I can understand what I’m observing. So, a little test…

Google Calendar refreshes calendar subscriptions every 24 hours or so, did you wait that long ?

No, I haven’t waited that long yet. The difference here though is that when I set up the initial subscription of the Nextcloud calendar, I can’t see pre-existing events on the subscribed calendar. I would have hoped to at least see these; if only to serve as some visual feedback that the subscription worked. Or do I have to wait 24 hours to see those as well?

To understand the observed behaviour for the phone apps, I’ve unsubscribed calendars in the web applications (on the desktop). This is what I’m observing:

Based on this observation, I’d have to conclude the following:

Please let me know if there’s something wrong with my reasoning.

Nextcloud app calendar on the smartphone

There’s no such thing as a Nextcloud calendar app on smartphones.

This is a useful distinction. Thank you. I assume the Nextcloud app falls in the former category as well.

Google Calendar refreshes calendar subscriptions every 24 hours or so, did you wait that long ?

I now have and still can’t see any events on the subscribed Nextcloud calendar in Google Calender. Either, I’ve done something wrong, or there is an issue.

@tcit Scratch everything I’ve said above. I must have sounded like a deranged madman. Turns out I was on 2.0.2 of the Nextcloud app, which had a calendar view. As of tonight, I’m on 3.11.0 of the Nextcloud app, which, surprise! surprise! doesn’t have a calendar view. This makes scheduling a lot clearer. Please confirm that the following now make sense?

I don’t understand this, can anyone translate? How can I get my Nextcloud Calendar events to show up on my Google Calendar?