The issue you are facing:
The Settings in Nextcloud show that there’s an update available, 21.0.7 (from where I’ll leapfrog all the way to version 23, I assume). But clicking “Open updater” shows “No update available.”

Is this the first time you’ve seen this error? (Y/N): Y

For Docker installations you have to update/pull the image to/with the desired version. The internal updater doesn’t work. Keep in mind that you should upgrade through all major versions.

You are probably using nextcloud:21 atm.

It’s actually the Linuxserver Docker container, so it relies on the internal updater. Updating the docker image does nothing. Seems there’s a disconnect between the Settings page update checker (update available), and the internal update checker (no update available). There’s a bunch of threads here of people experiencing the same thing, but it seems to “magically” work for them the next day with no indication of why it wasn’t working from Nextcloud. Mine hasn’t worked for weeks.

Why the internal update checker claims there’s no update available is the question. 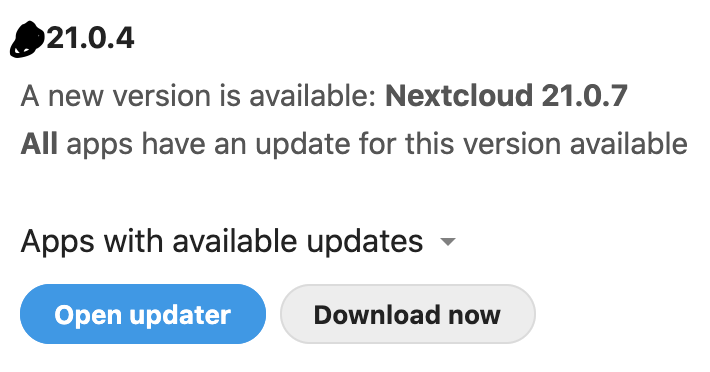 Ok, I thought you were using the official Docker release

Have you tried to switch the update channel to “beta” and see what’s offered then?

So I guess it’s probably a temporary issue with the Nextcloud update servers at the moment. I’ll retry Monday evening.

No difference on Beta unfortunately

I’ve just received a message saying that the update server could not be reached in the last 3 days.
There is already a github issue that I can confirm Update server returns 500 ISE · Issue #698 · nextcloud/updater_server · GitHub

Update just worked. Got a “Nextcloud couldn’t reach the update server in 3 days” notification. A few hours later, got a notification about an update at last and was able to update normally. Thanks to @lebernd I was able to understand it was a Nextcloud server issue and nothing on my end, and the solution was only to wait, as those earlier posters found out unwittingly.