I don’t own an iOS device, but my brother cannot connect from his iPad. He got errors like those users reporting:

hey folks! struggeling with following error when trying to connect via ipad nextcloud app: “it is not possible to connect to the server at this time. Check server error”. [Fehlermeldung_iPad] problem occures just with ipad app. when using browser on ipad it works. tried different users on different ipads. Nextcloud Log looks like this: [Log_Nextcloud] i deleted the brutforce sql table. i tried php v 5.6 and 7.1 any ideas? thanks for you help marcus

I´m trying to connect my server using the IOS app but is not working. Can someone try to help me? [nextcloud] Best regards,

Last, he sent me a screenshot with this error message: 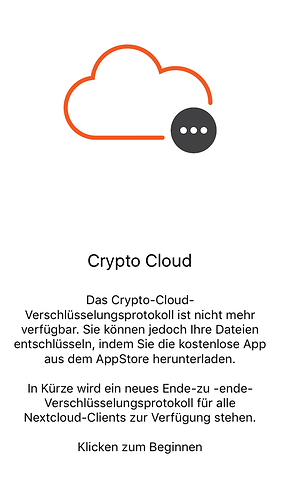 grafik640×1136 76.7 KB
From the Logo shown here I deducted that he might be using “Crypto Cloud for Nextcloud” but he answered that he is sure to use the correct “Nextcloud” app.

My server is 13b3, I have not enabled end2end-encryption (or any other encryption apart from TLS).

thanks for bringing this up as well!

Also, to be clear, I can access the server just fine via a Web browser. Including from the iPhone that is unable to connect via the IOS app.

Thanks for any help.

My brother reported today that, after updating the iOS app, he now could access my server. Seems to be solved by iOS app version 2.19.1. Thanks, iOS app team.

Turned out there was an additional cause: I had enabled brute force detection app. Since I have many users / devices behind my firewall, I seem to have triggered the thresholds. Deactivating this app seemes not do remove the restrictions in place already but only prohibit further event aggregating. I had to delete the entries from the corresponding table in the database. After that, all was “back to normal”.

thanks - tried that aswell without success.