Sharing a directory from my DIY Truenas NAS with Nextcloud

Sharing a directory from my DIY Truenas NAS with Nextcloud

Hello to the whole team of the Nextcloud forum

This is my first request for help!
I created a DIY Nas with Truenas Core 12 and installed the Nextcloud 23.01 plugin.
Everything works fine

I looked for the solution on the forum and the doc, but I found nothing on the subject!
I would like to have access to certain Nas directories in Nextcloud to share them with my nextcloud users via the internet with a secure domain name and Let’s Encrypt. but I don’t know how to share the Nas directories? I read the doc and I must say that it is not clear to me who is a beginner. If someone has configured their Nas and Nextcloud I would like some advice.
Have a great day and thank you for your help

you can integrate external file systems using “external storage support” app (I think it’s core). Take care - in the past I found this app caused significant slowdown of the system… 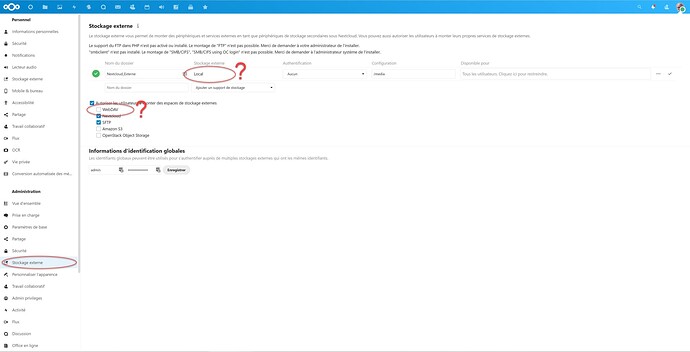 it depends on how your Nextcloud could access this shares…

I don’t know exactly how the TrueNAS Nextcloud plugin usually works, but I’ve found a tutorial that you can check against the way you’ve set it up.
Assuming your Nextcloud instance is in a “jail” as described, you’ll need to be sure the folders you want to share are accessible to it (see “Creating the mount points for the jail” in the tutorial).
Assuming that’s done, you’ll want to use the ‘Local’ option Nextcloud, and give it the file paths to those mount points.
SMB, SFTP and WebDAV are alternative options, but Local is nearly always fastest and most robust. Do be careful of files that are changed or added without going through Nextcloud though - you might want to run ‘occ files:scan’ on a schedule to check for those.

Excellent subject it is complete and it answers my problem exactly. I followed the example to the letter and it works. I had tested it before your message, but I had configured the sharing incorrectly and it did not work! A big thank you to you mactent

and to the whole community. I wish you a great weekend see you soon Richard