Save failed due to no disk space left on storage server 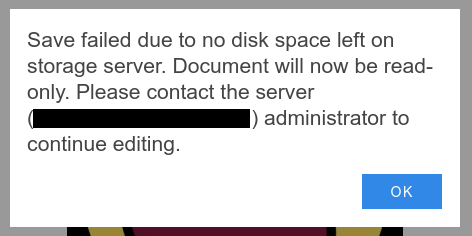 Firstly, yes there is definitely plenty of storage on the server. I have tested with both and unlimited quota set, and a generous quota with plenty of spare room. A test document triggering this was created blank from within Nextcloud, only edited within Collabora environment. Saves were frequent and successful until finally after adding 3-4 images, the error popped up.

I found a similar-sounding report of something like this but it was apparently resolved by upgrading Nextcloud. I’m at most recent release on everything, and this has survived at least one update when we deployed 12.0.3.

Of course, the disk is not full. We can upload new files to the server and all Nextcloud functionality is working perfectly. Only Collabora is reporting any issue.

Any suggestions as to whether this is an issue at the Nextcloud or Collabora level and how to properly debug it gratefully received!

does the collabora container or the exposed data directory of it has enough storage space?

Didn’t check the container version’s disk allocation but the locally installed one was on the same disk as the main Nextcloud storage, which only about 20% full. My primary installation is the version installed via packages, I just dropped the docker version on the system as per the official Nextcloud docs to verify that the issue still happened there, and wasn’t just something I’d missed in my install.

It does kinda “feel” like a temp storage space or a permissions issue on something, but not sure where it could be coming from. After doing this all by the book so far, I can’t see where I’d be having this issue and not everyone else bumping into it all the time. I don’t think I’ve done anything weird or unusual in my setup at all.

We ran version 2.1.5 for weeks without any problems.

We are seeing the same behavior - 11GB in /var/cache/loolwsd. Most of these files seem very old - is it safe to delete files older than say 7 days from this directory?

Update to the latest version 3.0.0.5. The disk space problem is solved.