I am a big user of Deck, both using my NC web instance and the android app.

In terms of achieveing the goal of adding a card - the most efficient way is using my Android device where I:

On the NC web interface it takes more clicks to achieve the same. I suggest adding a “add card” control in the Deck widget, as shown below: 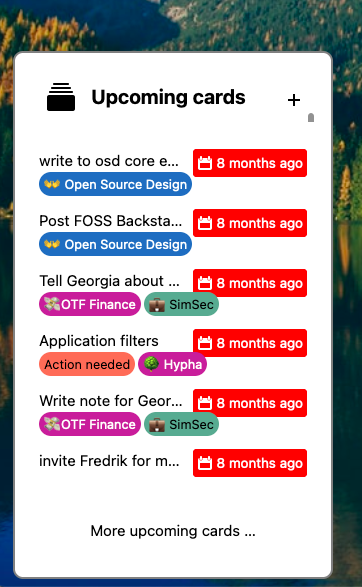 The ideal next step would be to display a modal to allow the user to choose board name, column, description, etc.

If that was not possible, then the “add card” button would bring you to the Deck list of boards - https://nextcloud-url.tld/apps/deck/#/board.

Is this possible? Thanks again for a nice app.

That’s great news. It saves at least 2-3 extra clicksm which is good as there is a high-probability of me forgetting the task I wanted to record.

I’ll wait until the app has been updated in the appstore. (Unless you’re going to tell me it has already!

Well i’m neither a maintainer nor a developer of the server app, but i assume that the next major release of Deck will ne published together with Nextcloud 22

Oh! For some reason I thought you were. My mistake! Thanks for the Android app anyway.