Poll app - How to specify the language of the poll?

Sometimes I use the poll app to share a poll with colleagues (which are not Nextcloud users) using the public link.
The language used in the poll, is the language defined as default for my Nextcloud account. However my colleagues are english speakers, and the poll is displayed in my language to them.
So, this is a feature request: would it be possible to add an option in the poll app to set the language of the poll ?
Even better: would it be possible that the app automatically detect the language used by a participant to the poll in his web navigator to display the calendar options in english in their language ?

For more complex polls I understand that auto-translate might not be possible, but for calendar polls, I believe it is fairly possible to to translate days and months using the language of the web navigator of the participant.

Thank you very much in advance for your help!

This is on the todo list. Sorry, no further solution for now.
If the owner changes his language to english, public participants also get the english UI

If it is on the todo list that is good enough for me, I can wait.
I cannot change the language of my Nextcloud account, it must stay in my mother tongue.
Thx !

I have to be more precise; What I wrote was regarding mails. Generated mails are composed in the language of the poll owner in case of public (external) users.

Generated mails are composed in the language of the poll owner in case of public (external) users.

Mails in the language of origin are not a problem.

The language for the UI is taken from the user’s config or from the browser’s language setting in case of public users. The default language should be ignore.

I have been able to verify that it is not the case: The language of my Nextcloud account is in French.
The web navigator language of my colleagues (who do not own any account on my Nextcloud server) are in english. Yet, the poll was displaying dates (day and months) in French to them, not in English.

If it should be displayed in English, maybe there is a problem then.

Then it has to be another problem (and not polls related).
I can prove, that the lnguage setting is recognized correctly.
The same public poll with different languages by changing the browser settings (Firefox). 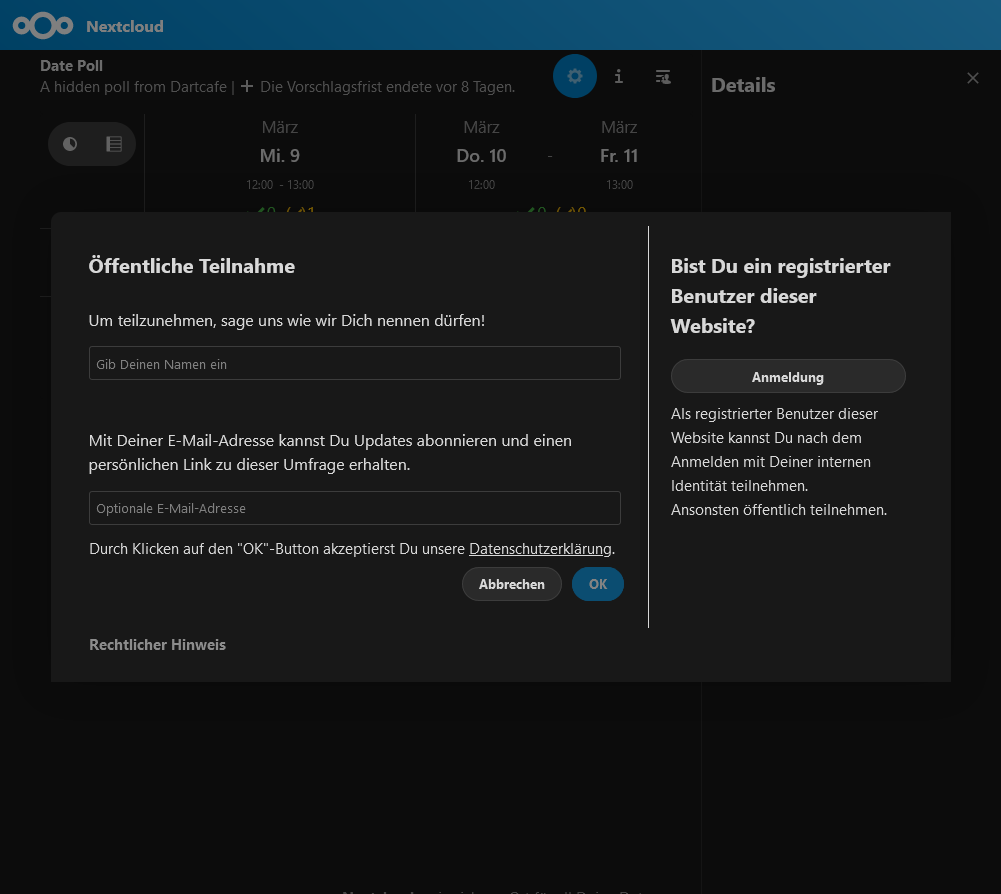 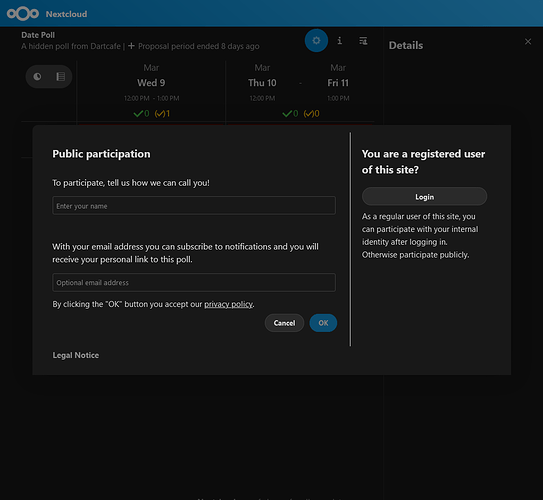 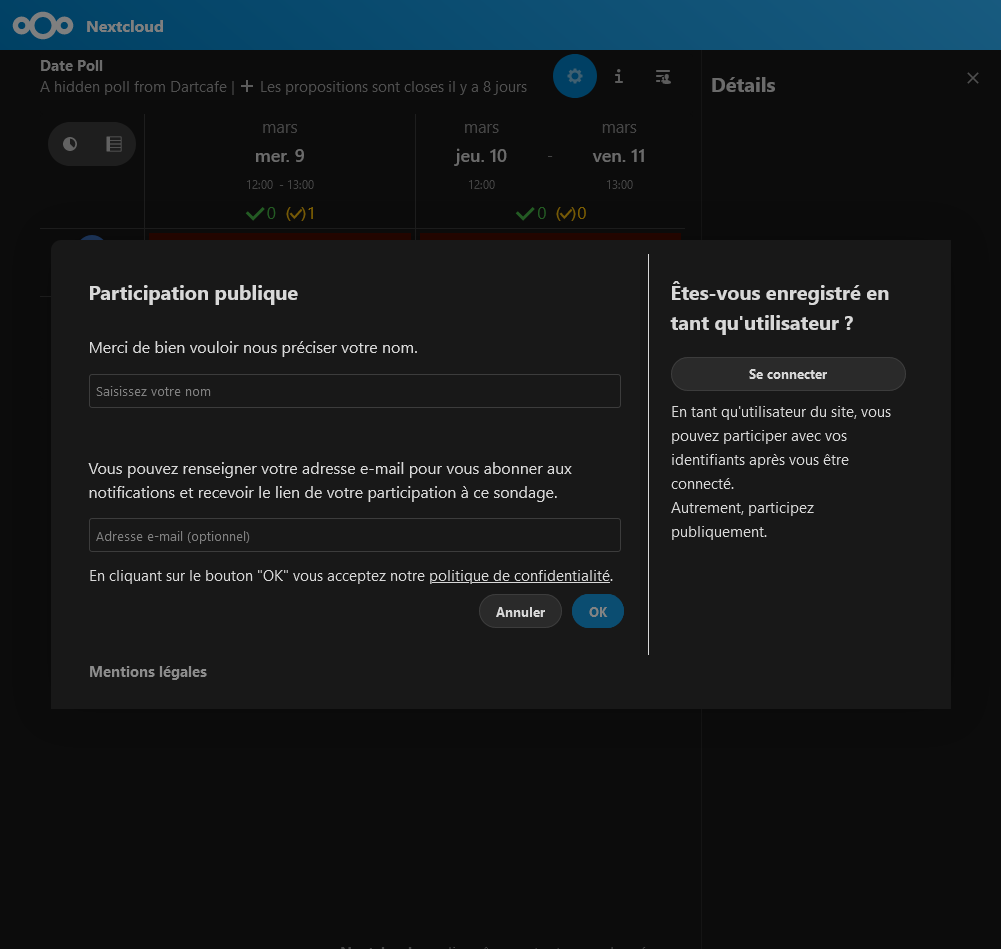 Obviously, here it works. This exactly what my request was about.
Then I cannot explain it. It didn’t work for some colleagues for some reasons… but I guess it must have worked for other then.

The colleague with which I was able to look at the language issue, was using Firefox (no idea which version) Under a CentOS user account. The CentOS is also working behind a proxy.
For privacy reasons I will not be able to reproduce the issue and provide all data about this.

But could the problem come from CentOS or the fact that a proxy is used ?

So actually it does look like a bug: I went back to my colleagues and it seems that the auto-translation only worked for some part of the poll interface.
Basically everything in the parameter publicly available, but not the days nor the months names.
It happens in English, as well as in German, when using Firefox, under CentOS and Windows 10, with or without proxy.

I know snap upgrade are a bit delayed: maybe this has been fixed in the latest version available of poll but it’s just not yet available for snap ?

First of all, Polls doesn’t care about the user’s language or locale settings. The browser’s settings are respected for public users, which is handled by some components.

It all depends on the languages the user defined in his browser settings. Firefox (and i beleive other browsers, too) differentiate between the app’s language and the language used for websites and in which priority.

Additionally some settings or add-ons could hide the settings, i.e. for preventng fingerprinting, which also could hide time zones settings.

Okay, so does that mean that if I create a poll using my Nextcloud account in French (for example), it may be displayed to my english public responders colleagues, in french instead of english, if they have set up add-ons masking their browser’s settings ?

Could this explain why only some parts of the poll public page are automatically translated (like the information of the poll at the top right) but not the calendar of options itself ?

I can only speculate, what the reason is. But the date format is not defined by the language setting, but by the locale settings. Polls does not evaluate this settings, but just uses the settings, which nextcloud tells to use.

The speculation about the fingerprinting is just still a speculation, because firefox especially has settings to minimize possibilities of fingerprinting which example hides the user’s timezone and possibly other settings.

Nevertheless, there is nothing, what can be done in Polls.

I guess that is the issue

!
So actually I tried to set up a different localization (I set it to Germany for the demonstration) : And as you explained, the calendar (days and months) are in german

So now in case I want to share a poll with english speakers, it means I must change my nextcloud account localization to an english territory.
This way, doesn’t matter anymore whether the translation works or fails: by default it will be displayed in english.

And actually, I have been able to check the calendar translation on my own computer : doesn’t matter what localization I set, auto-translation of days and months works for me

So there is an issue, definitely, but the issue comes from the user side, not the app.

If I find the time to, I will question my colleagues to investigate where the problem could come from.

Until then I will just set my location to English, to solve the issue.
Thank you for your help !