I read on forum,

I tried again - with same result

2 . I can scan PDF in Romanian language ? It is an addon for this language ?

Did you install tesseract and OCRmyPDF? and also the necessary language (romanian)? The message queing capabilities also have ot be available for php (semaphore functions).

Did you install tesseract
YES > from Github with ./install-tesseract.sh

and also the necessary language (romanian)?

NO > I don’t know how can install romanian language, but i have an english PDF
Available language are only 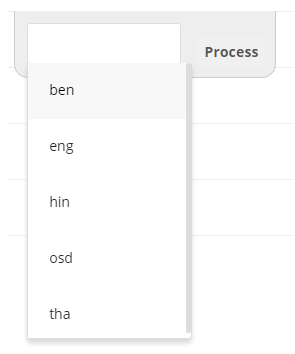 The message queing capabilities also have ot be available for php (semaphore functions).

Sorry i don’t understand this - please explain it for a beginner user.

Thank you very much for help - this problem is very important for us!

Thanks for this information! I guess your ocrmypdf installation didn’t go well. Because the output you give here, is a traceback (an error). You can try to reinstall it or look at https://ocrmypdf.readthedocs.io/en/latest/installation.html for further help, because I have not really much experience with CENTOS yet.

Now OCRmyPDF works perfectly, we tested it from the command line,

It is a procedure(step by step) for debugging ?

After a refresh i saw this … maybe can help

Hi, it seems to me, that this has nothing to do with OCR now, it’s reporting a CSRF check failed: Cross-site request forgery, also known as one-click attack or session riding and abbreviated as CSRF (sometimes pronounced sea-surf) or XSRF, is a type of malicious exploit of a website where unauthorized commands are transmitted from a user that the web application trusts. There are many ways in which a malicious website can transmit such commands; specially-crafted image tags, hidden forms, and JavaScript XMLHttpRequests, for example, can all work without the user's interaction or even kn CSR...

Hi, I have recently released a new Release Candidate (beta) but it’s using Docker containers and offers easier configuration. Maybe you can check this out and try.

thank you for your care!

I upgrade NextCloud 11 to NextCloud 12 and PHP 5.6 to PHP 7.0 on test server and fresh install NextCloud 12 with PHP 7.1 on production server.

The activate button is fade out for OCR app on both servers.

The similar problem with SSO & SAML app was resolved with downgrade PHP 7.1 to PHP 7.0.

Can you give me an advice?

I guess the php-redis module is not installed. Just install this php module and the installation should succeed.

using Docker containers and offers easier configuration. Maybe you can check this out

Yes the php-redis is the answer, now i can activate the OCR app. Thank You!

I found your guide to install app https://github.com/janis91/ocr/wiki/Installation-and-Configuration-(Docker-setup) , but because of my less experience with Docker, I got stuck.

I installed Docker CE and i tested with
docker run hello-world
and Docker works.

Where is redis/ directory ?
Worker folder is var/www/html/nextcloud/apps/ocr/worker ?
The errors are

Maybe a video tutorial with installing OCR app will help the community and will be gold for us.

For this kind of video tutorial, i use ISPRING 8 free https://www.ispringsolutions.com/ispring-free/download.html , maybe this small hint will save some time.

@janis91 can you explain where ist the redis Location?

it must be an docker Container?

After 1 year I have time to reopen this project

On our server is installed CENTOS 7 and PHP 7.1

I installed Docker and REDIS, I ran the command into the …nextcloud/apps/ocr/redis folder and it worked

After that, in the …nextcloud/apps/ocr/Worker folder, I’m trying to run this command

but I get this error

Is it just a proxy problem?

I tried to add this instruction

But, it didn’t work

On our server is installed CENTOS 7 and PHP 7.1

Centos does not have apt, this is for debian based linux. Centos works with yum instead which is for Red Hat based linux.