Hi, everyone. I’m running NextCloudPi version 1.25.0 on an Odroid HC-2, installed on a MicroSD card. I have a WD120EMFZ 12TB drive installed, pulled from a new external HDD.

The problem I’m having is very frequent hard drive spindowns/spinups. It does so around 200 times per day, confirmed by SMART tests. This results in around 6000 start/stop cycles per month. Considering that this drive is only rated for 300,000 start/stop cycles, it will exceed its rating in a little over 4 years.

Does anyone know why the frequent HDD start/stop cycles? I do not use the Nextcloud desktop sync client, so it’s not that. Is there any way to access the power settings in Nextcloudpi? I cannot even find a terminal in the version I’m using.

Any suggestions appreciated. I really do not want to replace an expensive hard drive due to early failure. Thanks!

You can set spin-down timer.

Maybe you can also find something useful here
https://forum.odroid.com/viewtopic.php?t=28535

I really hope that helps

Will check those out - thanks for the help!

If I’m understanding this, I’ll need a second Micro SD card to install a different OS than Nextcloudpi in order to update the firmware or change the spindown timer, because I have not even been able to find a terminal in Nextcloudpi.

Actually, though, I really don’t think it’s spindowns that are the real problem here, but spinups. I don’t want to disable spindowns entirely, because I’d really rather the HDD didn’t run continuously.

What I’m wondering is what is triggering so many spinups? Is it the Nextcloudpi OS accessing a database or something that’s stored on the HDD? Is there some timer for that that could be changed? It’s not that users or Nextcloud sync clients are making requests, because I only have a couple of users, and I’m the only one who even uses a desktop client, that I mostly keep disabled.

If anyone has any insight into this, I’d appreciate it. Thanks!

How do you connect to the raspberry then? Ssh is actually a terminal, or do you have a screen and keyboard/mouse connected? I never did that, does it provide a desktop actually?

Mine is an Odroid HC-2, not a Raspberry Pi, but I have never interacted directly with the device or even the underlying OS (Nextcloudpi) by terminal. I have done everything through the web GUI in a browser. There is no video port in this device, as it was designed to be a NAS, and operates headless. I installed the OS by putting the image on the SD card, and followed the configuration instruction found in a good Youtube channel. I have not found a way to access the terminal in Nextcloudpi. I really wish I could.

Ok, so if you use windows, try something like putty, connect to the ip adress of the device, try your nextcloud username and password. On raspberry i use the user pi, but that is a raspbian user that most likely is not present on the os for the odroid. On raspbian ssh access needs to be enabled by puting a file on sdcard, probably something similar needs to be done on your device.
What is the os version displayed in the webui?

That’s the problem: I normally log in using the IP address. If able, I’ll attach a screenshot of the web GUI after login. There is no access to any of the settings of the underlying OS (Debian/Raspbian 10, from the wiki page), or any way I can find to open a terminal. It’s a greatly simplified set of controls. 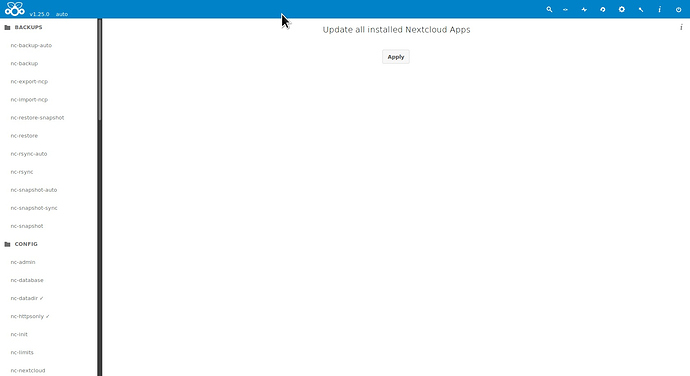 thats a comoletely different thing, what i mean is you should be able to log in via an ssh client like putty, then you should have access to the underlying linux os. But you would need to know the username and password for the linux user.

Ok, so i found out the ncp for odroid boards is based on armbian, and according to their site the standard login for that is
User: root
Passw: 1234

So putty or any other ssh client should be the way to go. Then cd to the backup path and check the actual backups for presence and filesize…

OK, I’ll try that later today. I appreciate your help!

Could this be the Nextcloud cron job? How often do you run it?

Connection refused when trying to log in through putty. I’m a bit of a noob at this, so I might have messed something up in the attempt, but it seemed pretty straightforward.

I have not set up any cron jobs at all. If there are any that have been set up by the software developers, I have no access to them. I do not see anywhere in the configurable items to set them up.

What was the message on putty?

Did you have to set any passwords on first install probably? The root password might have been changed during install.

I am not even asked for login credentials. I assume I’d be asked for them after attempting the login via putty, because I don’t see a place to pre-enter the login creds. All I get is “Network error: connection refused.”

Do the developers of Nextcloudpi read these forums, or does anyone know another way to submit an official bug report? This seems like an issue serious enough to need fixing, not only for myself, because it is very likely to contribute to early hardware failure. Thanks.

Disregard last post - I just signed up for Github, and will be submitting an issue report.

I don’t know if this is also relevant to the OC-2, but I found a reference to enabling SSH access: