It seems there is no straightforward way to use Talk to create a conversation between users on two different Talk servers, so I am trying to use matterbridge as a workaround.

My idea is to have each respective admin of the server create server specific relay user. Then add the opposing server’s relay user using matterbridge to post messages from conversations on one server to another conversation on another server and vice versa. But I am not sure how to do this or if it is possible

Does anyone have any ideas on if it is possible to use a pair of bridge-bots to relay messages in a on one server to a separate conversation on another server?

Did you try checking the box ‘Allow guests to join with link’ ? 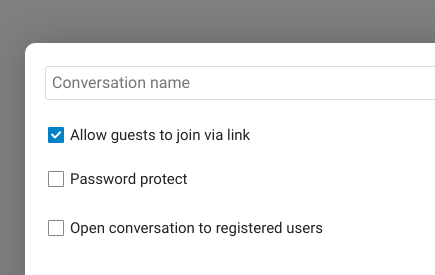 Thank you for the response! I had thought of that, but that solution doesn’t make it such that you have Server to Server communication. It is just means that one server is where conversations take place. Do you think a true federation solution is posible with users on two different servers?

a true federation solution is posible with users on two different servers?

XMPP works quite well for that purpose. Many of the “commercial” messaging systems run XMPP without exposing the external connection capabilities. Several years ago, I remember attempting to run my own XMPP service. It worked great for text messages, but video calls were difficult to configure correctly.

I seem to remember an early version of Nextcloud being able to integrate with XMPP. I haven’t been following the Nextcloud code base. I suppose it might be possible to expose the “Talk” API in a style similar to XMPP. However, the exposed API is difficult to secure against DDoS and greatly increases your attack surface on your server.