Hi all Nextcloud Users and developers,

Anyone interested in a Nextcloud T-Shirt? Check out https://aptgetshirt.com
50% from each sold Nextcloud T-Shirt will go to bounty source
We’ve launched indiegogo campaign to help us startup and see if there is an interest in such project. 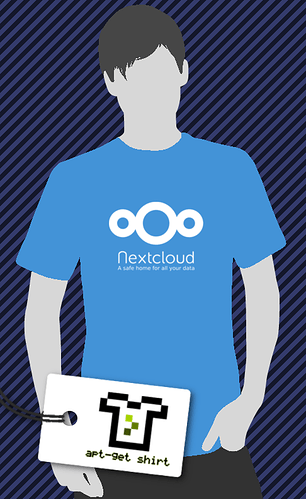 Is this still the case?

The site still mentions nextcloud on bountysource as the beneficiary.

Should be changed, I propose Nextcloud Include. @muppeth

Is this still the case?

Yes it is, thought the project has been pretty dead. We have sold few shirts this year so we decided to donate in bulk by the end of the year as the fees would be bigger then donation itself.

We are planning to kicksrtart next year when we finish building printing workshop, which will make us idependent producing prints ourself rather then outsource 'em.

Reason: Don’t use bountysource anymore!
Thanks for the tip. We have been gathering quite some money in donations from disroot, which we will be “spending” now on nextlcoud apps.

@Halle_Luja Perhaps there is already solution, but scrolling through the threads linked does not show any official “go to” solution. Is there an official one from nextcloud?

Nope, I started a threat to discuss it but there’s no dynamic at the moment:

Hey, as explained in the following thread, bountysource shouldn’t be used any more: Although the concept of bounties might have it’s challenges, I think it’s important to give the community and smaller enterprises a possibility to support the implementation of features and getting bugs fixed by combining financial efforts. In order to achieve some impact it would be good to chose the platform wisely so I suppose we should discuss it here. Do you got ideas on where and how to manage this?…

Thanks for the tip. We have been gathering quite some money in donations from disroot, which we will be “spending” now on nextlcoud apps.

This is awesome! I’m so glad to hear you plan to support the developers independently build these useful apps.