Nextcloud Snap did upgrade itself to 21.0.1 successfully a couple of days ago.
Everything is running fine, sometimes a bit slow, but not a problem for me.
The issue that I have, is that the free space available is shrinking by about 1GB every hour.
I did some digging and found that in the directory
/var/snap/nextcloud/27920/mysql
a new sequential log file of about 1GB get generated every hour
we are now at logbin.000049
I have approx. 24GB left, and therefore 24h to solve the issue.
Operating system and version: Ubuntu Linux 20.04.2
Headless accessed via webmin.
Beside Nextcloud there is no other service on the server.

I’m not an expert and I would appreciate some help.

Thank you in advance!
Kenny

the hourly generation of 1GB log files progressed yesterday during the day. I’ve tried to connect to mysql via command in webmin with
sudo nextcloud.mysql-client -s /tmp/sockets/mysql.sock -u NEXTCLOUD-ADM-USERNAME -p PASSWORD
but could not get the mysql prompt. I’ve only got the mysql help screen and could not pass any command with the “-e “option. By the way I’m not sure what the correct DB name is.

Then in webmin I’ve stopped the mysql service, deleted 50 logbin.0000XX files of 1GB each, deleted their filename from the logbin.index file and restarted the mysql service.
Around midnight there was a break of the 1GB logbin.0000XX files generation. This morning al 06:00 AM the generation, with heavy CPU usage, resumed. It seems to be related to nextcloud clients being connected.

I’ve found someone else with similar, unsolved problems

Hi My binlog files (/var/snap/nextcloud/27697/mysql/) are eating up my space! I installed NC using snap (I know, I know, I was in a hurry and I’ve regretted since.) In a non-snap install I could use MySQL to purge binlog files from a certain date (PURGE BINARY LOGS BEFORE '2021-04-01 22:00:00'; ) but how do I get into MySQL on this instance? A normal msql command does not work (reports not installed as it is installed by nextcloud snap) Nextcloud version 20.0.9 on ubuntu 20.4 MySQL 8.0.…

in the sql config file (/etc/.my.cnf) you would have the possibility to control the retention time of your binlogs. In my config this looks like →

in this case, after 7 days the binlog-files will be removed automatically by the db.

PURGE BINARY LOGS removes all binary logs from the server, prior to the provided date or log file.

There is also a “relative” importance to do sql-backups in the right manner, when using binlogs (because you would wish to use the a PIT-(Point-In-Time) restore probably one day) →

Hope this can help you a little bit

Thank you for your input. I have a snap installation and unfortunately I’m not allowed to make any change to my.cnf (no write permission, no permission to change permissions).
The CPU is at 90-100% all the time and 1GB log files are still generated every hour. I don’t have any alternative than to delete logbin.0000XX files and deleted their filename from the logbin.index file.

Anyone else with a good idea?
Thanky
Kenny

Thanks Kenny and Githopp192 for bringing this up here!
I have the same problem and no other solution.
I just want to mention that there is a github issue about this problem:

MySQL DB Taking up a lot of space - how can I connect to it to see details and clear it out?

Hey everyone i have the same issue
Snap 21.01 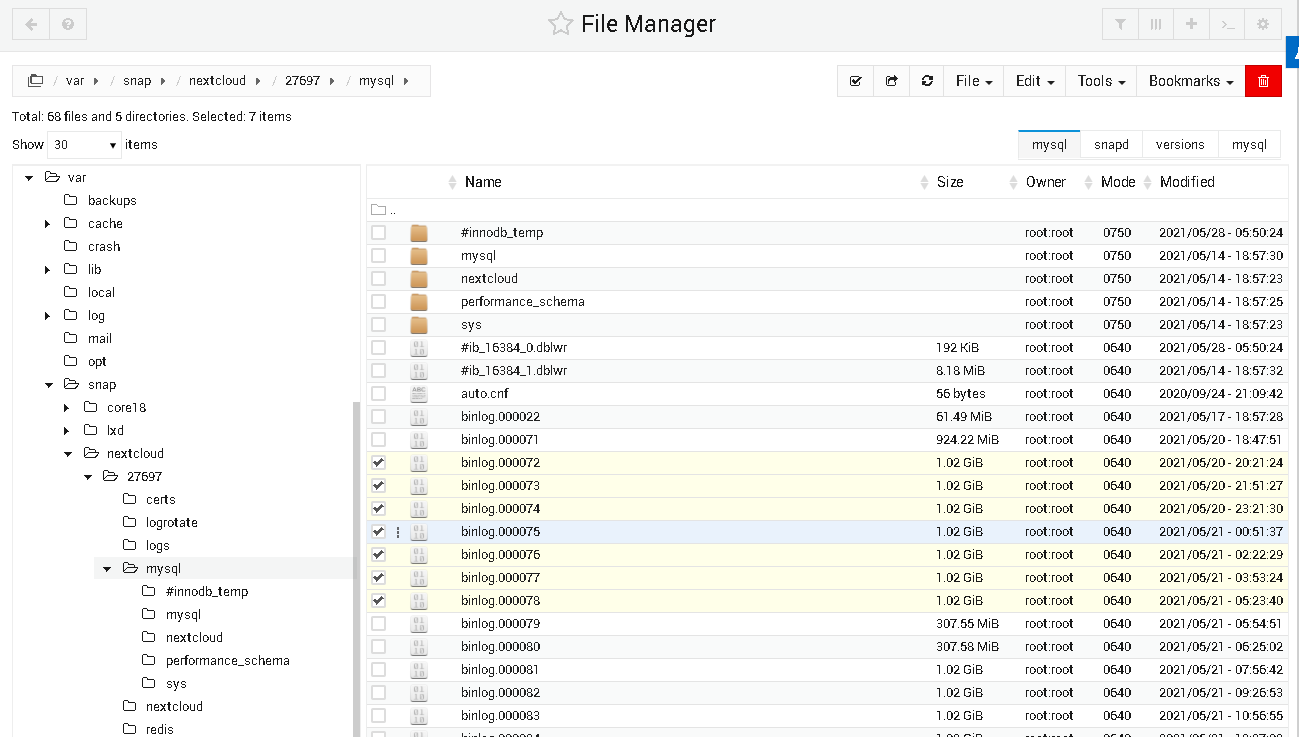 Ah I just posted a new message in support about this, as I have 8GB of files and 21GB of database binlogs.

Good that I’m not alone, bad that there seems no solution - I just had to upgrade my VPS to deal with the low storage condition, but it’s not really ‘my’ files taking up the space

Hi
The last update (21.0.1snap2) solved my problems.
Which Snap version are you running?