Does anyone know of an app with which I can share Notes?

Have a look on the following apps:

But when i create a note with Carnet for example, I can’t share this note is there any way how i can do this?

Any help is appreciated

I do not use Carnet, but Notes instead with Android Application. 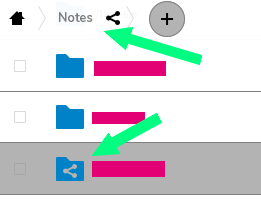 It is working the same with Folders under /Notes, folders are being used as TAG there and all notes under the same folder/tag could be shared at once.

There is no merging of changes, so sharing notes is risky.

There is no merging of changes

I agree with you here.

I would not agree with you fully, at least it is not more risky if I edit it by my self with multiple devices.

Example:
User1 has Notes as Application on NC Server (1), as Android Notes Client (2) and file saved on a laptop with NC Client(3)

With desktop client it is a bit better - it will check that file was change before you change it local and give a warning - you have to merge text manually.
Basically the same race condition as I used it alone from multiple devices. But you right, you need to keep it in mind

Indeed, multiple devices or sessions is just as bad as multiple users.

I wonder if the new file locking feature in NC18 can be integrated in the notes app.

hey there. very useful thread. thanks all.
It should be mentioned in the app description that sharing is possible because that is a great feature that potentially many people are looking for. https://apps.nextcloud.com/apps/notes

Also it would be good to document it a bit on how to share the notes.