We are happy to announce the release of Nextcloud Notes Android v2.16.4 #apps:notes !

.
This release also supports the new API 1.0 from the notes server app - main difference to all previous versions is, that the title can now be edited manually and it will only be automatically generated by the app in case you are creating a new note. This gives you the comfort to not think about a title when quickly adding a new note but also the power and flexibility to control the title of your note manually if needed. As usual, we also fixed a few bugs.

for the long term is still to replace the current markdown rendering engine (which has a lot of known issues) with a modern, well maintained alternative. We currently try to integrate Markwon but there are a lot of obstacles on our way to achieve this goal. Another idea is to integrate Nextcloud Text instead. If you want to join the development let us know at GitHub or in the comments.

The release is rolled out in stages (at time writing 40%), so just be a little patient if you can’t see the update yet or switch to the beta channel. 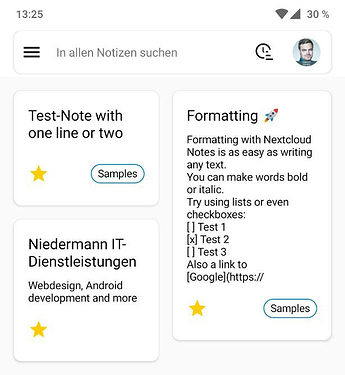