Nextcloud for Windows Mobile version 1.1.0 is out now! 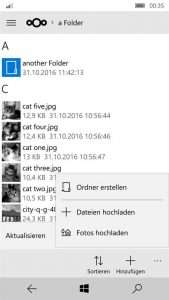 The Windows App for Nextcloud is available since November last year. Since then, we got a lot of feedback from the users and some contributors were involved in developing the next version. So today we are proud to announce version 1.1.0 of the Nextcloud App for Windows Mobile! You can find it in the Microsoft Store.

Good news: The app is now also available as free trial version. This version is fully functional without limitations. But if you want to support further development, you can also choose the full version for $0.99.

For the next version, we’re planning full Windows Universal Platform (UWP) support. This means the app will run on all your devices and adapt to the available screen size responsively. It will even run on the upcoming Windows 10 S.

Besides manual synchronization of folders, the next version will also include an automatic synchronization feature so that new files (e.g. pictures taken) will be automatically uploaded to your Nextcloud. The next app will also get a renewed design that looks much more like Nextcloud.

Thanks to all the contributors and translators!

You can see a list of all the contributors on Github.

Special thanks go to:

If you want to contribute to this project, feel free to take a look at the GitHub repository and start coding – it’s all open source.

You’re also welcome to report any bugs or feature requests on the GitHub issue page of this project.

Nice news. Now that Microsoft has an App Store only Windows version, a universal app becomes more important than ever.

Aside from that it would help people with low-end Windows 10 devices (like tablets with low storage capacity) to have a client that does not have to sync everything locally and is useable with a touch interface too.

thank’s and hold on good work! 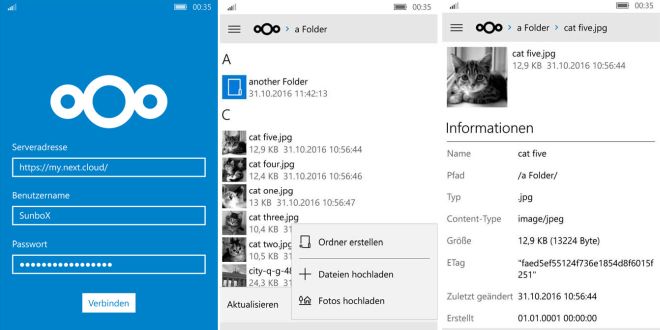