Nextcloud 18 - iOS client : How to activate and use E2EE?

First of all : Thanks for Nextcloud, it’s very nice !

I’m using Nextcloud 18.0.5 for a personnal use and I’d like to use the E2EE.
My client is mainly my smart phone Iphone, with the client app Nextcloud Coherence 3.0.3.9.
I’ve been in the app section of my Nextcloud and installed and enabled the E2EE app version 1.4.0.

And the thing is that I don’t find the option on my phone, when I create a new folder, to encrypt the folder.

in the settings of the iOS client app , there is an option “End to End encryption”.
When I clic, there is a big red message (that disappears after 4-5 seconds) : 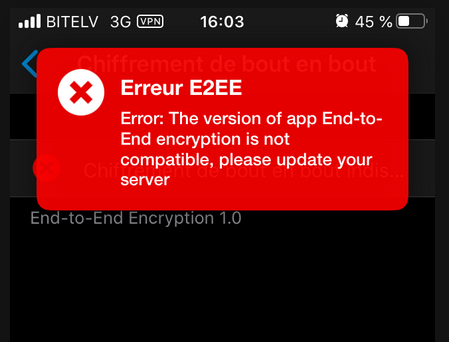 It’s weird, because in the settings of the server, it’s clearly mentioned version 1.4.0

Is there something more that I should do ?

Thanks in advance for your kind help

Using the desktop-client, i was able to encrypt an empty folder. FTP shows that it is working when putting files in there. 12 word password can been shown in app for recovery purposes. Mobile app or web-app show the folder is encrypted.

edit: it looks like the desktop-client is needed for starters and mobile apps can only access encrypted folders. We still found ourselves unable to exchange keys. I assume, using an asymmetric key, there’s a public-key somewhere on the server. Mobile app should be able to fetch it - but isn’t. Afterwards asking for the password (12 word phrase from desktop client)