we just packaged the first beta release for our upcoming Nextcloud 14 version.

You can find as usually on our download server in the prerelease folder:

There are a lot of changes in this release. Most of them are under the hood and involve restructuring as well as polishing. Many tiny fixes and improvements to the file handling also went in. All in all a release with a lot of small improvements.

As this is the first beta version be well prepared to have a bumpy start with it, but in general it should work quite good. We already did some tests on real instances and they looked promising. Nevertheless this is a beta release

As always: have a backup and know where the docs are to do a rollback (https://docs.nextcloud.com/server/13/admin_manual/maintenance/restore.html for example).

We would ask you for your feedback on this - best is to have it directly on Github - we already added a label for the issues reported especially regarding the Nextcloud 14 beta: “14-beta-feedback” (https://github.com/nextcloud/server/issues?q=is%3Aissue+is%3Aopen+label%3A14-beta-feedback) so we can actually focus to polish the Nextcloud 14 release.

We also added it to the updater server in the beta channel. This time it will not show up to all users by default, because we enabled this only for ~20% of the update requests. It’s just to prevent a lot of people run into the same problem.

For known bugs and a list of stuff that is scheduled for the beta 2 you can have a look at the overview ticket at https://github.com/nextcloud/server/issues/10410

is @jospoortvliet giving out t-shirts and/or other gimmicks again for every bug found?

@JimmyKater we’ll probably do that for Beta2, I’ve had a look at a daily build the day before Beta 1 was packaged and my feeling is we’d run out of t-shirts fast

Nothing super critical but there are loads of small thingies to fix, perhaps instead we should offer t-shirts for every PR that fixes one

we’ll probably do that for Beta2

but to be a bit (just a bit, only) more serious: i think i was wrong and you offerend a shirt for every found bug in release-candidates… so that would be fair, i guess

Yeah, we usually did it for RC’s, to cover upgrade bugs specifically.

But how about this. For beta 2 (and up), you can earn a t-shirt if you get a successful PR in.
For RC, if you find an upgrade bug!

I’ll make sure to announce that next week, then, when B2 is out

I am quite willing to try out Beta 1 but I do not find information which Apps will work and which won´t.

Jep, update of Can I update? app would be great.

If you want to try nc14 in a save environment:

do not use in production. will destroy your maschine forever.

use a new installed ubuntu16/18 in a virtual box.
maybe centos7 and/or debian 9 is also working. raspi doesn’t. I couldn’t find php7.2 packages for raspi.
if $(hostname -f) is not the real fqdn of the server replace it with the real one.

if running on the internet and have a working dns setup you can use something like the following:
-e "ssl_certificate_type=letsencrypt" -e "fqdn=your.domain.com" -e "cert_email=your@email.com"

Update for the app was just shipped

App works like a charm, sadly with the result that I can’t update my system yet. But will test on VM

Just updated to this version, did some simple functionality tests and all seems ok.
I wanted to mentioned that I run into a small issue while updating using the web GUI, which I reported here.

what about talk and collabora online app. are they working now? yesterday and today in the morning they didn’t install.

Any hint how to upgrade?

Server runs with PHP 7.1 as CGI/FPM on a shared host. Upgrades worked well before.

Someone tried the new groupware features? It’s possible to invite people to events in calendar and so on. First problem i noticed: Invitee can confirm the calendar event but the event owner gets no information about that confirmation.

But in general. I really like that groupware integration. Also the resourcebooking is great although it needs a lot of polishing.

Super easy way to take it for a test drive: snap install nextcloud --channel=14/beta. Also makes it easy to test the upgrade process:

First thing I noticed is that the contacts app is a bit garbled (both a fresh install of v14 beta1 as well as an upgrade from v13): 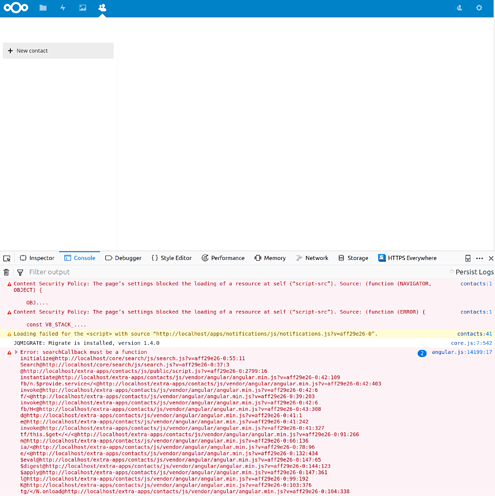 @MorrisJobke is end to end encryption going to be stable for the 14 release ? Would that mean the end to server side restricted files ?

Is it possible to see changelogs for NC14 ? I could not find anything in https://nextcloud.com/changelog/ from the changelog.md on NC14 beta1

“The files of the app External user support (user_external) were not replaced correctly. Make sure it is a version compatible with the server.”

There are no username/password boxes and no way that I can see to login with a Nextcloud local account.

Not been able to test yet in vmware, but had anyone tested the fix for the android app and video streaming.

Previously it would only download the video first, the fix should be in this version to stream to android instead