The issue you are facing:
So I got a problem which I haven’t found any guides or documentation on how to do yet.

What I want is rather simple, I have nextcloud running on 1 server, I got 2 storage servers and I want for example 25 users on 1 server and 25 users on the secondary server. So how can this be done? or is it even possible?

I have the same requirement, does anyone can help, many thanks.

I found some old info from owncloud forum, If there possible to do it like that?

All fine so far. You could also forego NFS and mount directly from Nextcloud over SFTP: 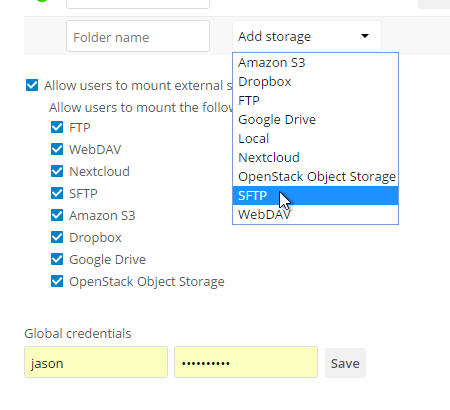 You can also then mount it as a user on the remote system with write access, and not worry about NFS style permission mananagement:

So again, create the groups you need, assign the users to the groups, then limit the shares by group:

/data is typically user root, so all users will get access to the normal /data/ directory by default. Differentiate how you mount shares if going the NFS route so it doesn’t look confusing in 6 months when you come to troubleshoot:

/media is just an example. Mount it wherever you feel comfortable but do so out of the webroot (/var/www...) for security.