Maps only shows a small subset of my contacts

I have 256 contacts in my Contacts app, most of whom have an address. However Maps only finds 28 of them, and I cannot work out what is different about the ones it finds and the ones it doesn’t. It detects all the Groups I have created in Contacts, but, again, it fails to find all the contacts within each Group.

I am running Nextcloud 18.0.4 on a paid-for server that also hosts my e-mail account.

You can enable and disable which contacts are being displayed, if you click on the group name. An enabled group is usually recognized by the total number of contacts behind its name. On the screenshot e.g. you can see that contacts of the group “Privat” are currently not displayed on the map. 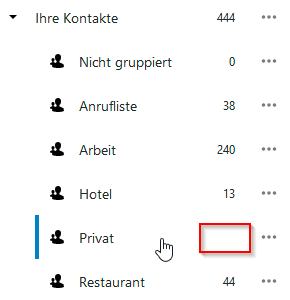 Thank you, but that is not the problem I am describing.

In my case, both the total (All Contacts) and each group only contain a subset of the totals in the Contacts app. In other words, Maps is failing to read all the contacts.

Have you identified a contact which isn’t shown on the map and can you post the vcf record of it?

Here is an example,

Ok, that makes sense. The British address format is different from the one, mostly used in Europe or Germany. Most likely Openstreet Map has problems to find the location. The following two issues are describing similar problems:

Hey there, this app is very nice and useful - thank's for this :-) While starting using the app it came to my...

I'm noticing a pattern of things that don't make the map where most of my content does as expected. This first thingie...

… but this one was found. I don’t know what “Hilligdon” is, a suburb?

It might be worse to open a new issue ticket here to get this problem addresses and maybe fixed in the future.

Many thanks for your help. It’s started me on another journey, getting to know github! I’ll familiarise myself with that first, and then open a new issue ticket, as you suggest.