We noticed that the desktop client on macOS (cannot check this on any other operating system) does not seem to check for new updates properly. 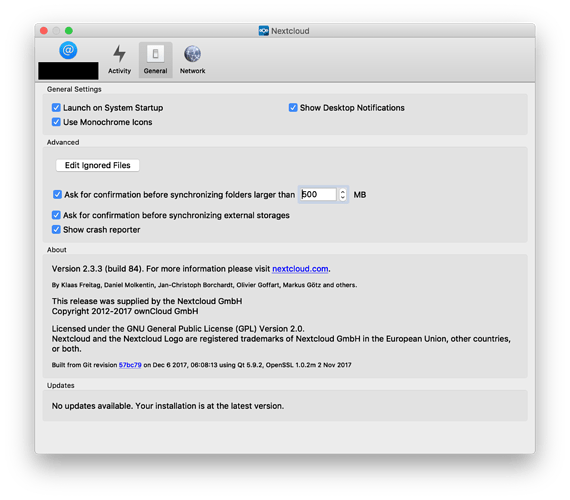 I think this is a bug in the desktop client not checking its update channel properly, or am I wrong?

Hi, I think this is not a bug but the step between 2.3.3 and the 2.5x version is a major one with incompatibilities. I also think with the 2.5.0 announcement there was some information that this step cannot be indicated to the update mechanism in 2.3.3

but 2.3.3 surely was not the last version before 2.5 (I remember 2.4x) and it still doesn’t explain why the updates are not being pushed through the update channel and the client always tells the user that there us no update available. Don’t get me wrong, I’ve seen the blog entries with all the changes and I do agree that they had to been made but what they don’t say, is that you have to manually update your client. It just says something along the line “Get the new client now”.

I still consider the “missing” update feature a bug.

//EDIT: I just got a reply from another user who had been on holiday till today and he just told me that he is using version 2.5.1 and it also says “No updates available”, despite 2.5.2 being available. 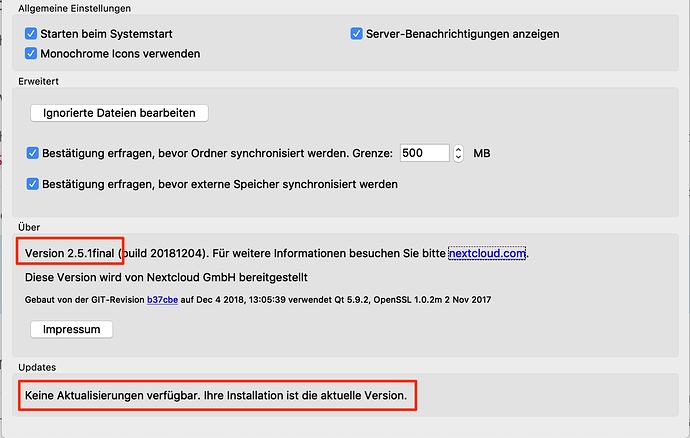 Any idea what is wrong?

it’s always the same answer… if dev’s don’t think that the actual version shouldn’t be delivered to all they can (and will) stop the update-notification.

and so… apparently the recent version seems to have certain bugs and isn’t meant for all and everyone.

someone from nextcloud said that developper of the desktop-client got sick and that it isn’t really easy to find someone else jumping in but they are looking for someone new. so it might take a while until the developpment would go on.

Same problem here. And I think it goes back further than v2.3.3 of the desktop client. It did once work, but I’ve had to manually upgrade for quite some time.

For lots of my nextcloud clients, the best version(i mean without issues) is the 2.3.3.
I have 2.5.4 on three clients (1 macOS, 2 windows 10) that don’t have issues.
All the rest is on 2.3.3, i think there isn’t update notifications for that reason of stability

Here lies the answer to your problem:

Issue: Update latest versions to 2.5 for the new client

and see what @MorrisJobke posted as an answer

Is it safe to push new versions out?

and so… apparently the recent version seems to have certain bugs and isn’t meant for all and everyone.

I got fed up with how the NextCloud Mac client leaked memory. On my iMac it started off using around 55MB and within a few days had crept up to 1GB. I decided to try the ownCloud client (v2.5.4), not expecting it work with my NextCloud server, but it did, perfectly. Just a warning that my NextCloud server isn’t supported. Memory usage after a few weeks - 43MB and it’s there doing its job as it should.

ownCloud offers a variety of installation options. On this page all options are listed. Choose the variant which best fits your needs.

If you still want to use the nextcloud client use the 2.3.3 it’s the more robust to use. No problems on my Mac that syncs 2To with a lots of files heavier that 200Mo use a stable 1Go of ram. Of course on other mac that needs less sync the ram is low.

I installed the NextCloud client v2.3.3 this afternoon and will monitor its memory usage over the next day or two. Thank you.

If someone also facing this issue: There already exist a GitHub issue:

Since version 2.3.3 the Nextcloud Mac client starts off using around 55MB RAM. After doing nothing for a couple of hours...