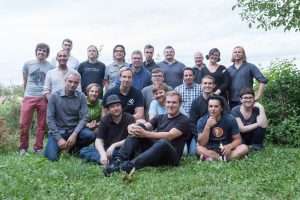 This year, we had dozens of face to face events with monthly meetups, a very successful first conference and of course a handful of hackathons in Stuttgart. We plan to continue these great traditions in 2017, kicking it off with a Hackathon from January 23 to 27.

We're very proud of how the improvements to Nextcloud 11 have been received! We're getting overwhelmingly positive responses on social media and the press wrote glowing reviews, here just a few of those: We of course want to keep this winning streak up and Nextcloud 12 should be a great release. This hackathon will be an important milestone on the way and anyone interested in making that happen, be it through contribution of ideas, code, design or documentation is super invited to join.

We especially like to invite app authors. We're very humbled by how much effort has been put in already to make apps ready for Nextcloud 11 and available in our new app store and we'd love to meet, discuss what else we can do to make app development for Nextcloud more awesome and spend some time hanging out.

We look forward seeing you during the week at our office at Kronenstraße 22A, 70173 in Stuttgart. We’ll generally start around 10 and between 7 and 8 in the evening, though we might return after dinner…

Hi, are there going to be application packages with Nextcloud 12? and is there gong to be an auto update?

Hi, are there going to be application packages with Nextcloud 12? and is there gong to be an auto update?

I think this is not something on our roadmap for Nextcloud 12 … there were general discussions about that topics here in the forum. Please don’t abuse this theard for questions like these

Linux distribution packages for the desktop clients - help out! dev

So. We've got a branded client in this repo: https://github.com/nextcloud/client_theming And it can be built for Linux, we'll do Windows and Mac! RC's are already up on https://nextcloud.com/install/ and awaiting your feedback. Who's in for some testing & package building? Here are instructions for moving your accounts over provided by @nickvergessen

…a community volunteer has started to build Ubuntu packages for example

I just blogged about Nextcloud and it's planned update improvements, you can find the blog post at https://statuscode.ch/2016/06/nextcloud-and-its-planned-update-improvements/ or below. Any kind of feedback welcome! :rocket: In the past, the update experiences with ownCloud have been difficult. It was not always clear when updates would be released for the updater app or how to move to a new major release. Apps disappeared after an update or apps were updated to an incompatible version (e.…

If you want to discuss specific features, you consider about developing something for Nextcloud 12 - or you want to take part into any specific task (updater, …) we’d love to see you at the Hackaton

Thank you for the reply Marius. Sorry about that.

It would be great to have some way(s) for people to attend remotely, eg livestream + IRC or a Mumble server or similar…

Hi, I’m new to the nextcloud community. I’m an iOS dev, and would like to contribute to the App. Because of some changes in my project situation I have time and will be at the Hackathon form Monday to Wednesday. I’m looking forward to this.

bugsbane - for sure we’ll have our usual IRC channel open. Maybe we should do an open spreed call for testing once or twice during the week

Love the idea of the open Spreed calls. That would be a great way to real world stress test with an audience who works still be sympathetic to any glitches encountered.

@jan pls help remind me on those spreed calls

we can post a link here and on twitter… Ofc, as soon as half a dozen people join it’ll break but - fun

Yes, that would be nice. However, I can’t take holidays every time. However, I can try to join a spreedme or IRC discussion next week. Do we want to discuss a point about the community?

Are there any suggestions or whishes at what to look regarding iOS on the hackathon?