After Upgrade to 16.0.0.5 I got a ascending CPU load in my nextcloud instance running on my own vSphere host. It starts exactly on the day of upgrade. After A reboot and waiting a few minutes the load is again very high. One apache tast uses 100% CPU Load.
No Calendar Sync is activated.
No I took a backup and upgrade to the Beta 17.0.0.0 it seems no better, but I have no long time experience with the beta. I don’t planed to install the beta releases, but now I tried it out because of this issue. Maybe I go back to the 16.0.0.5 with the last backup, but I let it run for a while for collecting som more performance datas.

I see other Threads with CPU Load, but depends on older versions and often with the calendar app. Not the case here.

I have the same problem. There are many lines in the Apache log file.
…PROPFIND /remote.php/dav/files/…

Try to check if Cache is really enabled. For me it was disabled in config, but somehow NC does not noticed it. CPU Load goes twice down. https://docs.nextcloud.com/server/16/admin_manual/installation/server_tuning.html#tune-php-fpm

I turned on the apcu cache and it solved.
The CPU load is now fluctuating. It’s OK?

I do have a similar pattern as you, I run the tasks in a cron-job every 10 minutes:

How often do you run background tasks @sigma and do you have some image preview plugin installed?

I have similar, but for 2 very small cores 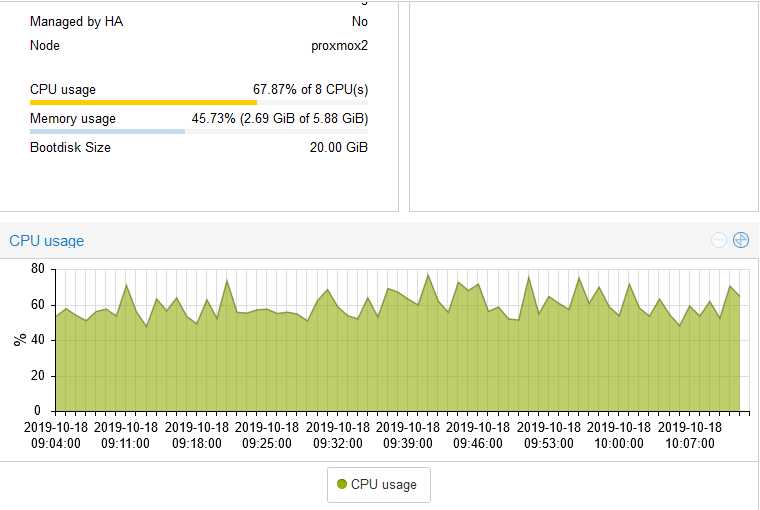 6 Human Users and 1 Robot account on Cubietruck with AllWinnerTech SOC A20 ARM® Cortex™-A7 Dual-Core and 2GB RAM.
You can see that on “Business hours” I hit CPU Limits and WebUI is not very responsible, but client do the job. Here is the difference when Clients are active and not.

Since I user the Beta 17 CPU Load is very moderate. As you can see in the graphics before I upgraded CPU load was 100% (6 Cores in a vm). some before it was 50% or e bit more. So it tooks CPU power more and more sincs the Upgrade end of september. After I upgrade to the beta 17 its very low, you can see it also in the graphics.

How many users do you have?

I have only max 10 Users and they are not permanently active. The high load was also seen if no user ist logged in. Our cloud is only for internal use and also tests.
I only can reply, the problem is away since the upgrade to the beta… but I normaly don’t like to use betas, here it was a test after I backuped the maschine I make the upgrade. Since now it seems to work.
I have no idea about the behavior of the 16.0.0.5… and it starts exactly at the day of upgrade. Not 100% from start but ouver a time of 2 or 3 weeks the load grows until it was at 100%

I applied again the graphic for the cpu. exactly on 17th of october it was low until now, at this time I installed the upgrade to 17 beta. and you also see the start growing cpu load arround 30th of september. That was the point I upgrade to 16.0.0.5.