High consumption of RAM and SWAP

Good afternoon. After last update to NC 19.2, docker image and app richdocuments. I find that the consumption of RAM and swap has gone up dramatically. The loolwsd process is the leader in resource consumption.
The size 30.57 GiB

Which type of memory were you looking at?

Virtual can be a lot higher but also somewhat ignored, Its basically just how much the process thinks its using. (if a process allocates 10 G of memory but doesn’t actually use it, VirtualMemory will be 10G but resident will be 0 (well, + the actual process size)).

More infos about this: https://tldp.org/LDP/tlk/mm/memory.html

I have Webmin installed on my server. And on the start page, I see such indicators. There was no such thing before. The processes indicate that the loolwsd process has the maximum leading place. 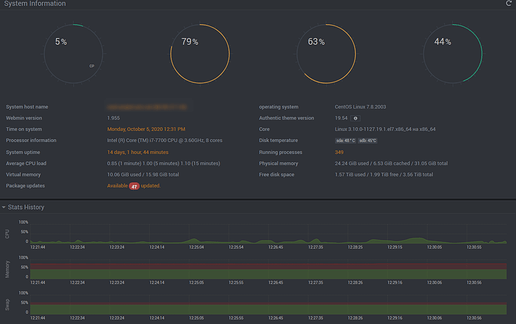 The Collabora Nextcloud server has been in use for over a year and has never seen such a load.
Collabora is used from docker

Which version of colabora are you using? Also, does the memory usage get that high immediatly after starting, or just after using it for a bit?

Killed this process and everything returned as before. RAM load 8-12%. Documents are opened and edited, everything looks great.
But the question remains What was it and how to fix it?

I currently don’t know what would cause this, but as a mitigation you could limit the memory of the container or restart it daily

Thanks for your interest in my topic. But so far after finishing this process yesterday everything works fine.