Trying to keep our Nextcloud instance organized. We have several departments, and would like to have maybe 5 department group folders. Inside those group folders, I’d like to create a folder that only a sub-group of my department group can access. Is this possible? From what I can see it’s not, so is the alternative just to have a long list of folders on people’s Nextcloud folder list?

Does anyone have any other suggestions of what they do in this situation?

Did you found any solution to this?

We just keep a darn long list of folders.

Well… you are actually looking for a file server, which is not was NC is about. The whole permissions model is not designed for such a setup. Just keep in mind, that the files on the NC instance all technically belong to the web server user and all other permissions are all managed in the NC database, so you could say, that those are virtual ones.

What is Nextcloud about?

NC is a file sharing and sync product - and file sharing is inhrently dis-organized and the groupfolders’ main feature is, that they belong to nobody in particular, so they don’t get deleted, as “normal” folders would, if the account they belong to, gets deleted.

Although you can bring in a little structure into the data by using groupfolders, this feature can’t replace a file server, which is what you obviously want it to be.

I get that the group folder feature can’t do this right now, but to say this feature “can’t” be done, and that I need a completely different software for nested permissions is a bit fatalist non?

I am just saying that NC is not designed around that. Anyway, this is nothing, for which you will get a solution on this forum. I’d say, if you want that deature, go to the NC core github site and create an issue/feature request for that.

Hi,
I know this might be late on the topic but we were facing a similar problem and were actually able to solve it by creating multiple Group Folders with a nested structure.
You can create a group folder named
Level_1
and then right away create another folder named
Level_1/Level_2
You can set different permissions for different groups on these and based on permissions users will see the folders or not. Obviously you need to give at least read permission to a Level_1 folder for the sub group to access Level_2.
Keeps it organized for the users, however you might end up with a long list of folders in the group folders app.
Best,
Christian

Hadn’t thought about that. Interesting, thanks!

See our blog from last year: 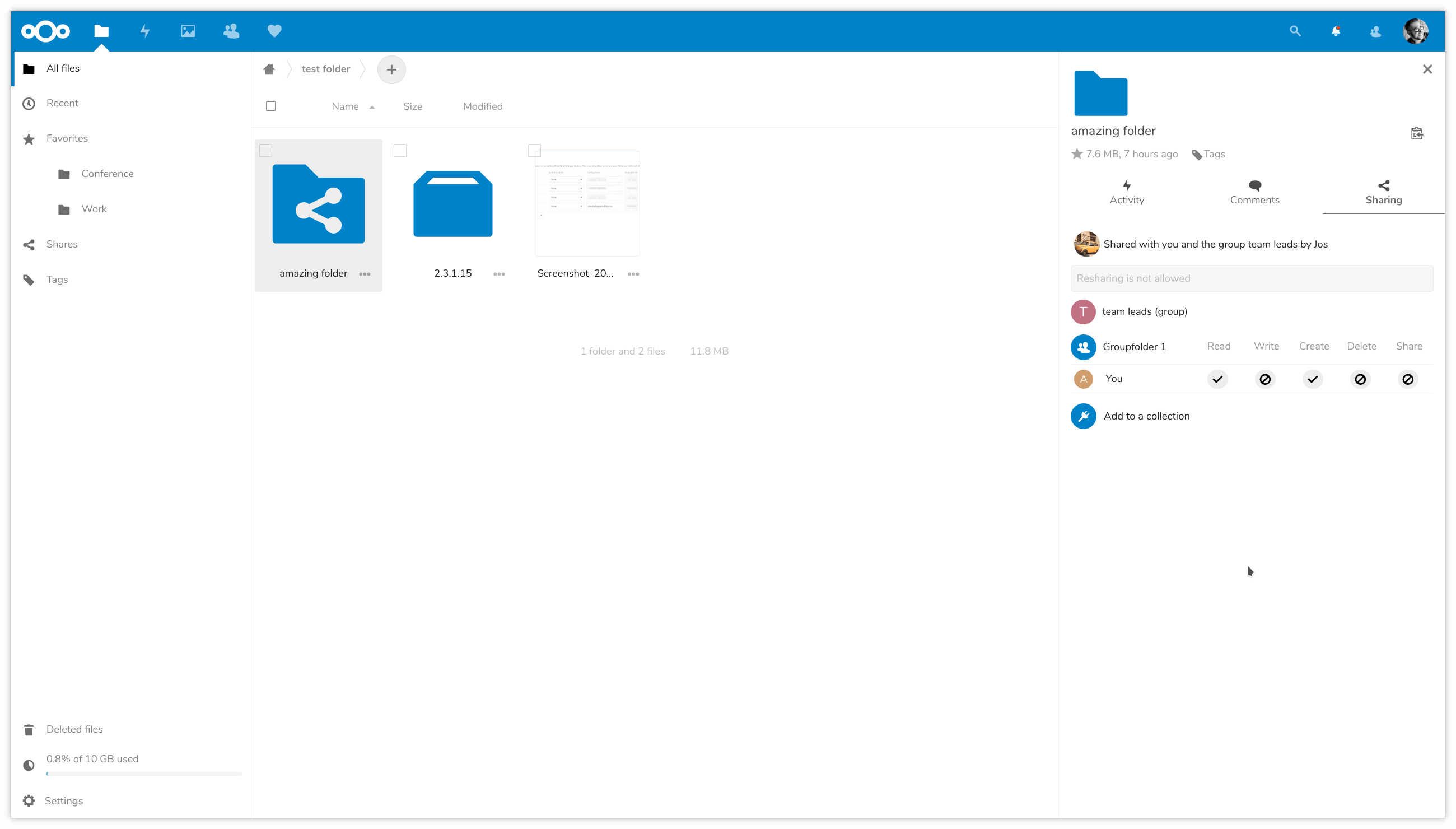 DFS for nextcloud… sort of.

I’ve added a group to a folder but disabled all group permissions because I want read-only mode. Then, using the advanced permission rules I tried allow specific users to write and delete. Those rules are not followed and instead only the group permissions apply.