In the middle of September we had the first Nextcloud Conference, bringing together over 100 contributors to the TU Berlin with a focus on getting stuff done. And did we get things done! Friday kicked off with a series of talks about enterprise and large scale use of Nextcloud, followed in the evening by the announcement of the Nextcloud Box. Saturday and Sunday we had keynotes, lightning talks and workshops. The rest of the week we got down in the code, developing a variety of improvements to Nextcloud and releasing a new version of the Android app with a load of great improvements. Today, the keynote and lightning talk videos are live on our YouTube account!

If you missed the event and like to meet the other people behind Nextcloud, join the hackweek in Stuttgart later this month!

Audience in one of the Friday workshops[/caption]

We've organized a series of meetups in Stuttgart since we started, each bringing several dozen contributors together to work on and discuss Nextcloud. The goal of the conference was to take this up a notch, enable a larger group of people to come together and get work done. Despite some difficulties due to the late announcement and high hotel prices caused by another event in Berlin, we had an impressive community showing with both long time contributors and fresh faces showing up.

The first day of the event kicked off with a focus on enterprise, education and large scale use of Nextcloud. Security architecture, roadmap, user management and of course scalability were all discussed. We're working on videos and might publish recordings of some of the sessions.

On Friday afternoon we announced the Nextcloud Box in the main press room of the TU Berlin. You can watch the announcement below, featuring Nextcloud founder Frank Karlitschek, Canonical CEO Jane Silber and Joseph Lee, Head of Global Operations at WDLabs.

We had some beers and snacks and sold the first batch of Nextcloud Box’es that evening, including 7 which are going to the primary schools in berlin!
[caption id=“attachment_1113” align=“alignright” width=“251”] 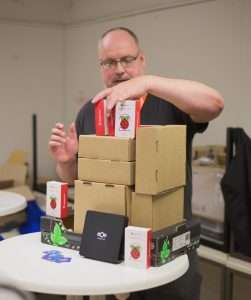 7 Nextcloud Boxes for the schools in Berlin![/caption]

Saturday kicked off with a quick re-hash of the Nextcloud Box announcement followed by the keynote by Jane Silber.

Next up was a string of a dozen lightning talks, starting with the introduction of Federated Cloud Sharing by Bjoern Schiessle.

After lunch from the California-inspired food truck in front of the building we had a variety of workshops and of course a lot of coding!

Sunday opened with the inspiring keynote by Karen Sandler, Executive Director of the Software Freedom Conservancy.

After her talk, we continued with another dozen lightning talks, starting with the future of iOS by Marino Faggiana. For lunch we had a variety of burgers and then - back to coding and workshops!
[caption id=“attachment_1116” align=“alignright” width=“300”] 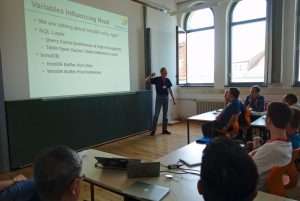 The rest of the week was focused on being productive. We worked on Nextcloud 10.0.1 and its new updater, design of the Mail app, the Android app and loads more subjects. Most days, people would trickle in between 9 and 10 in the morning, gather in small groups and get to work on topics they were interested in. Between 12 and 14:00 people would go for lunch in the university restaurant with their lunch tickets and get back to coding. Some frisbeeing would happen in between and occasionally something came up which was reason for an all-hands discussion but mostly things continued until about 7 in the afternoon, at which point debates about where to go for dinner started and people left in multiple groups.

The conference over all

The first Nextcloud Conference was a great success. We had a lot of participants who got a lot of work done, discussed a wide range of subjects and made great plans for the coming year. Up to the next conference! In the mean time, we have a hackweek in Stuttgart later this month and we'll certainly keep organizing those.

And in case you’ve missed it, we’re hiring!

Great! Too bad I missed it, I want revenge for my last speech I had in 2015, and by revenge I mean making a better presentation.

Would be nice to do a talk about the Nextcloud VM. Much has happened in the past year.