I’ve been enabling encryption against home storage as a matter of default recently, though I just stumbled across this:

Indeed I noticed I can SSH into the server and see the files in each user directory with no issue.

I’d pictured encryption being done through some process involving keys and the database to chunk uploaded files into useless, undeterminable blobs on disk (that is to say NC does the encryption on the application layer before spitting the result onto disk).

So what is the purpose of home storage encryption if it doesn’t obscure uploads on disk as they’re added please?

when your data encrypted by nextcloud and stored on an external provider like google-drive (for example) they would have to crack the encryption to read it.

That accounts for the server side encryption, but not the home directory encryption @sackla

I can read the contents of the file perfectly fine

Also on new files?
There are little benefits of using encryption on the home storage. if you want to encrypt data, rather use hard disk encryption. Some providers use it to pretend that they don’t read their user’s data. The problem is that they can do it anyway (or being forced to do it).

That was a new file @tflidd on a user I created after enabling encryption.

That’s what I’m figuring; if disk encryption is essentially the same (better) than this, what does this offer? Inability to read userdata is exactly what I’m looking to achieve, though in order for that to be the case the onus is on the user to encrypt on the client side, which requires 3rd party software as it’s not possible with the desktop client today.

I have the encryption turned on my server and i created a new user and placed a file and i was not able to see anything when i opened the file, it looks as it’s encrypted.

@AndyXheli do you have both home and server-side enabled? I’m only using home. 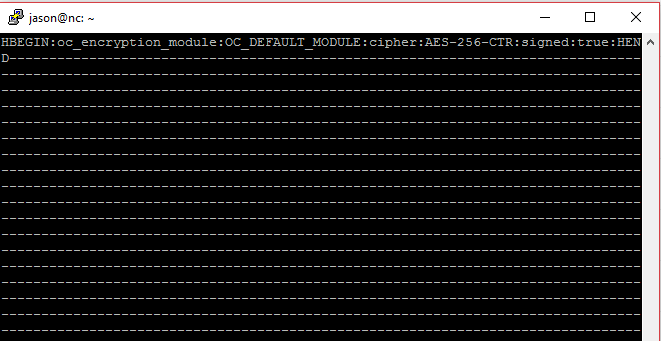 I have both enabled.

maybe I am blind, but I don’t know of any other built-in encryption features?
please specify “home directory encryption” or point to the documentation or admin setting you are talking about.

That accounts for the server side encryption, but not the home directory encryption @sacklahttps://help.nextcloud.com/users/sackla

Feel free to take a look at the screenshots I’ve supplied above.

@Guillaume I reverted your edit because it poses an interesting question -
I hadn’t thought about external storage up to this point, but it would appear it’s mandatory then in order to encrypt home storage.

I really only wanted home storage.

Additionally, would federated shares be affected?