In the address book I can’t see contacts from the list of nextcloud users.
At the same time, when composing a letter, I can find the user by typing his last name or the first letters of the email address.
I tried use ldap-contacts-suggestions plugin, but it has no effect.
I whant see all contacts in address book.

Please, fix this issue.
Thank you!

But indeed this connection would be a reasonable feature, at least to allow users to add other users as contact to their address book or combine it with one. Otherwise the contacts app could provide the nextcloud users to asking apps beside the address book contacts, if there is e.g. an email given etc.

So I would consider this a contacts app feature instead of one for rainloop. That way all apps that are requesting the contacts, could benefit.

Yes, it is the nextcloud’s contacts that uses the rainloop for auto-substitution. This is convenient if you know the name or approximate address of the recipient. But what if you do not remember the person’s name exactly? Switch to nextcloud’s contacts for search? It would be more logical if the contacts were displayed in the address book rainloop. Do you agree with me?

Ah, so maybe I misunderstood, so you are indeed just talking about the contacts from address book

. But the combination with nc user accounts still sounds interesting to me.

I would want an auto completion to show me a short list (maybe up to 5) of contacts where the string I was typing into the search list fits to one inside any field of the contact (Name, first name, email, phone number, whatever).
But I would not want the full contacts list beneath the search field whenever I mark it. Overload and I always know at least one thing to type in, if I want to write a contact, at least that his/her name starts with this or that latter.
Besides, the (new) contact search field on top right of nc web ui always shows the first part of the full contacts list when marked and you can go further wih arrow buttons, if I am not wrong?

I’m talking about contacts from rainloop, as in the picture below 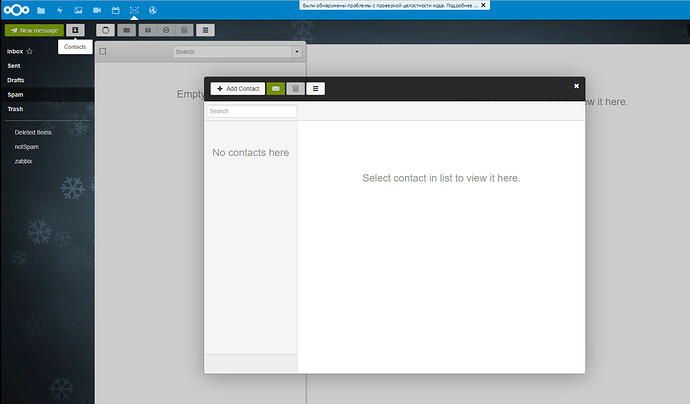 image1629×955 152 KB
I just need to see them all at this page. Users are more likely to choose from the list than to fill the name
Also the search in this contacts menu does not show anything.
At the same time, when composing a letter, the addresses are substituted correctly.
MichaIng August 31, 2017, 12:40pm #6

When create some test contacts with rainloop, they are shown in the list directly. Typing some latters into the search field and pressing enter shows just the contacts with matching string, whether its in the name or email. So works quite well for me.

And now when I compose an email, I can see your perhaps confusion:

Because I don’t see the contacts app icon on your screenshot: Where do the contacts shown up on writing an email come from? Are they users of the same nextcloud instance and might be your rainloop indeed still empty of “own” contacts, or ARE they indeed contacts created/gathered within the rainloop app and you face an graphical issue here?
In the latter case: Are there some errors shown in nextcloud log or browser console?

Because I don’t see the contacts app icon on your screenshot: Where do the contacts shown up on writing an email come from?

Also, a try to connect ldap-contacts-suggestions plugin to fetch contacts from AD, but it is not work too.
What I do wrong ?
I need to see all nextcloud users in rainloop’s address book.

What I do wrong ?

I guess it is just not intended and the address book does not show nextcloud users, just contacts created directly within the app.

But better ask directly at github: https://github.com/pierre-alain-b/rainloop-nextcloud and in case raise a feature request there.