Sooooo, I’d like to ask everybody to help and discuss the conference organization!

I’d like to follow a ‘familiar’ pattern here, building on the events I have organized before. That is, starting Friday with hacking, Saturday/Sunday talks (only lightning talks) and workshops (longer of course) and the rest of the week coding again.

Friday, we will do a meeting also with big users like universities to discuss federation and scalability, obviously anyone is welcome to join that, too, and no suits needed

I will probably do a blog about it…

Our todo is still significant, probably starting with creating a nice logo

Stay tuned, I’ll start dumping my todo list here, but for now I have some other cool announcements to focus on this week. Oh yeah, this wasn’t the biggest news, not by a long shot…

I can do the logo!

After the release today I’ll have time to help get things going here. Jan should be available on Friday, too 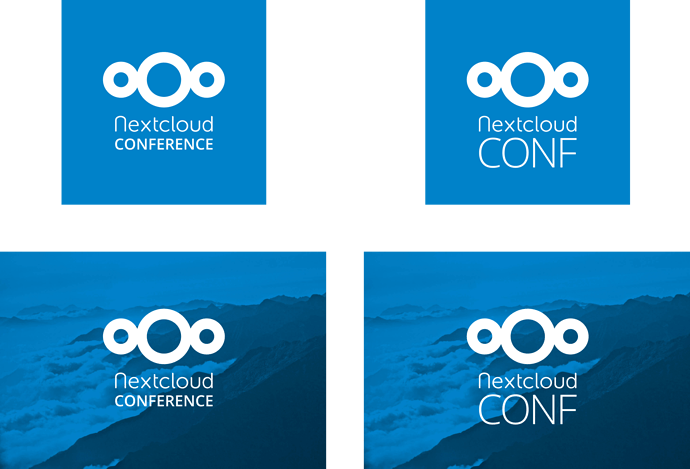 conference-logo.png2150×1462 879 KB
Jos said he prefers the left one, and I guess that’s also more understandable than the shortened »Conf«.

@Jos what’s the largest sizes you need the logo and banner in?

I think the problem with the one on the right side is that it looks too much like an acronym.

You could use NCC16 underneath Nextcloud as the acronym for this year’s conference, but if not, the logo on the left is fine.

I agree with @oparoz - the one on the left is a fine logo.

I’m interested in coming, but we’re mere sysops and not devs. I know we are welcome anyway, but I would like to contribute some on the sysop Level. Here are some subjects I would like to talk about;

As you stated, this kind of subjects would be on Friday, can you confirm this? How would it look?

And let me know if i can help with the conference, we are a small company but we do have some resources.

As you stated, this kind of subjects would be on Friday, can you confirm this? How would it look?

And let me know if i can help with the conference, we are a small company but we do have some resources.

We’d like to do a ‘big installations & federation’ day on Friday, which will be interesting for (to be) big customers & partners of Nextcloud GmbH as well, so that sounds like worth a visit for you folks.

With regards to help, you seem to know about and have interesting scalability issues, perhaps you’d be interested in actually running a session on that subject? Of course, we’d work together on that, but it would make sure the session is more relevant for real life if it is set up by somebody who actually bumps in these problems rather than by the engineers who might think they have solved all of them already

About the documentation of scalability you offer, that is a very interesting point and it’d be very cool to do something around that together. I’ll shoot you a private message on that one.

Last but not least, we can and should discuss how one can help and get involved, that will certainly be a subject for the conference.

I would love to present a session, but the problem is this;

Things i know though;

Again, we are very new to the oc/nc stuff and for the small en environments im not worried, but 6500 current (and 18k projected) users is a different ballgame and i have so much questions and only soso answers.

We could also do an interactive session, let people partipate in how they woukd setup such an env, or how they already have done, what their concern/wishes are, etc. Would it be an option to ask the big oc customers befkre the session and interview them?

I think any session should be interactive

Our idea for the event is more around very interactive workshops around certain subjects, where the organizer is mostly a guide rather than lecturing. We have talks, for sure, but those are 5 minute lightning talks exclusively, this to make sure they are on-topic and don’t bore anyone so we can all be in one room and be inspired together!

So, a bit of organizational info:

you can already test registration & stuff on https://conf.nextcloud.com in the next few hours.

Ok, thans different from what i expected, but less of a problem i think. I can talk for 5 min no problem…

So one subject could be theoretical design for large implemtentations based on what i know right now, and let people interact with that. Is that any good?

So one subject could be theoretical design for large implemtentations based on what i know right now, and let people interact with that. Is that any good?

So that would be awesome for a workshop/discussion on Friday. Would rock if you can lead that.

A lightning talk on that subject for Saturday or Sunday (that’s when we do the talks, keynotes etc) would complement it nicely

you can share the outcome of the discussion/workshop a bit with the entire audience.

@jospoortvliet any idea what I can do about android?

Or I? @tobiasKaminsky what comes to my mind are two things for lightning talks. Our process with lgtm etc, gitflow… And the other one about what features had been done and what is soon to come.

Both would give people insights on how we work and what we are working on so both talks would also function as a motivator for people to join. What do you think?

Cool idea. I knew that you have a plan, therefore I asked if @jospoortvliet has an idea for me

We can split the two among us or do them together

So, @jospoortvliet: we have 2 ligthning talks about android and please advertise that there will be a hacking android spot