What comes with being one of the world’s most influential cities, comes big responsibility. The City of Geneva is not only home to the United Nations, Red Cross, and CERN, but is responsible for the well-being of its citizens and for maintaining a prosperous society. Due to its influence and global prominence, it is without a surprise that those who run it place a high priority on security.

The administration in charge consists of approximately 4,500 employees located at different locations scattered across the city. They are comprised of a Secretariat General and five departments which involve several services. A major part of their daily workflow is collaborating with all the teams across the city and for a long time, were faced with a major challenge. This mainly concerned an outdated filing system with fewer functionalities, flexibility, and security.

From ownCloud to Nextcloud due to security concerns

When you want to exchange files seamlessly, collaborate internally and externally, and all the while having a system that is easy to use for all, working on a cloud is a great place to start. In 2013, the City of Geneva took its first steps toward this change and implemented ownCloud. However, after four years and a progressive decline in meeting expectations, they chose to look to Nextcloud. 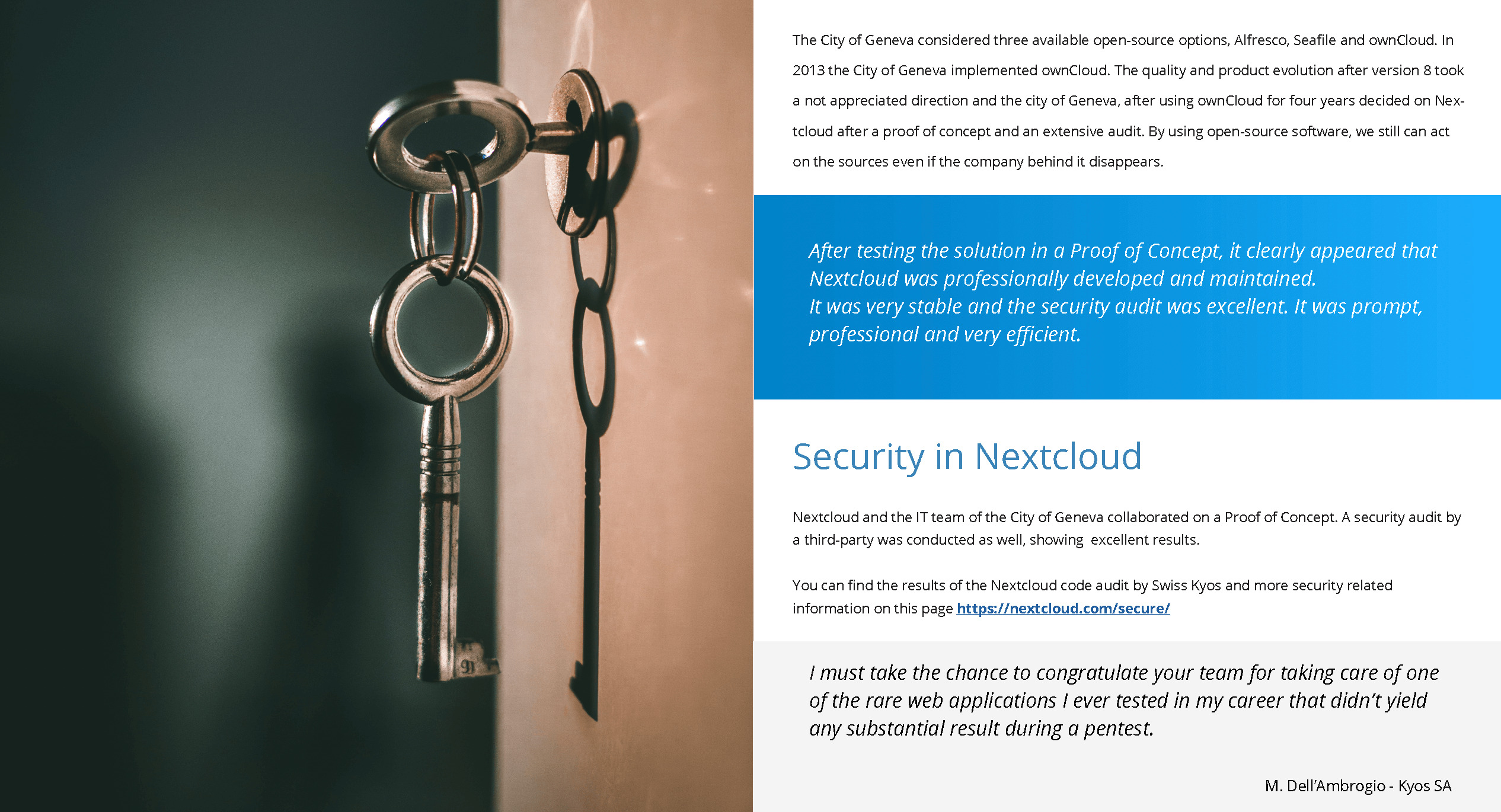 With such prominence and importance on a global level, the Geneva city administrators place a high priority on security. It is very important for them to have a cloud solution that is secure, compliant with privacy law, and that all their data is kept in Switzerland. With Nextcloud, these requirements were all possible and to prove it, extensive measures were evaluated to make sure our solution was the best fit.

After testing the solution in a Proof of Concept, it clearly appeared that Nextcloud was
professionally developed and maintained. It was also very stable and the security audit was excellent. We also got strong support during the proof of concept, even without a subscription and not being a customer yet. It was prompt, professional and very efficient.

From a lengthy code audit involving a third party to a proof of concept proven incredibly successful, they finally were convinced to turn to Nextcloud for good and haven’t looked back since.

An Effective Switch to Nextcloud

Nextcloud could finally provide what the City of Geneva needed, and more. For instance, now when an employee needs to share a file to a recipient outside of the organization, all it takes is copying a link of the file and sending it in an email.

It is as easy as accessing a webpage. The best [part] about it is that people who receive the link do not have to install Nextcloud or anything, they just click the link! 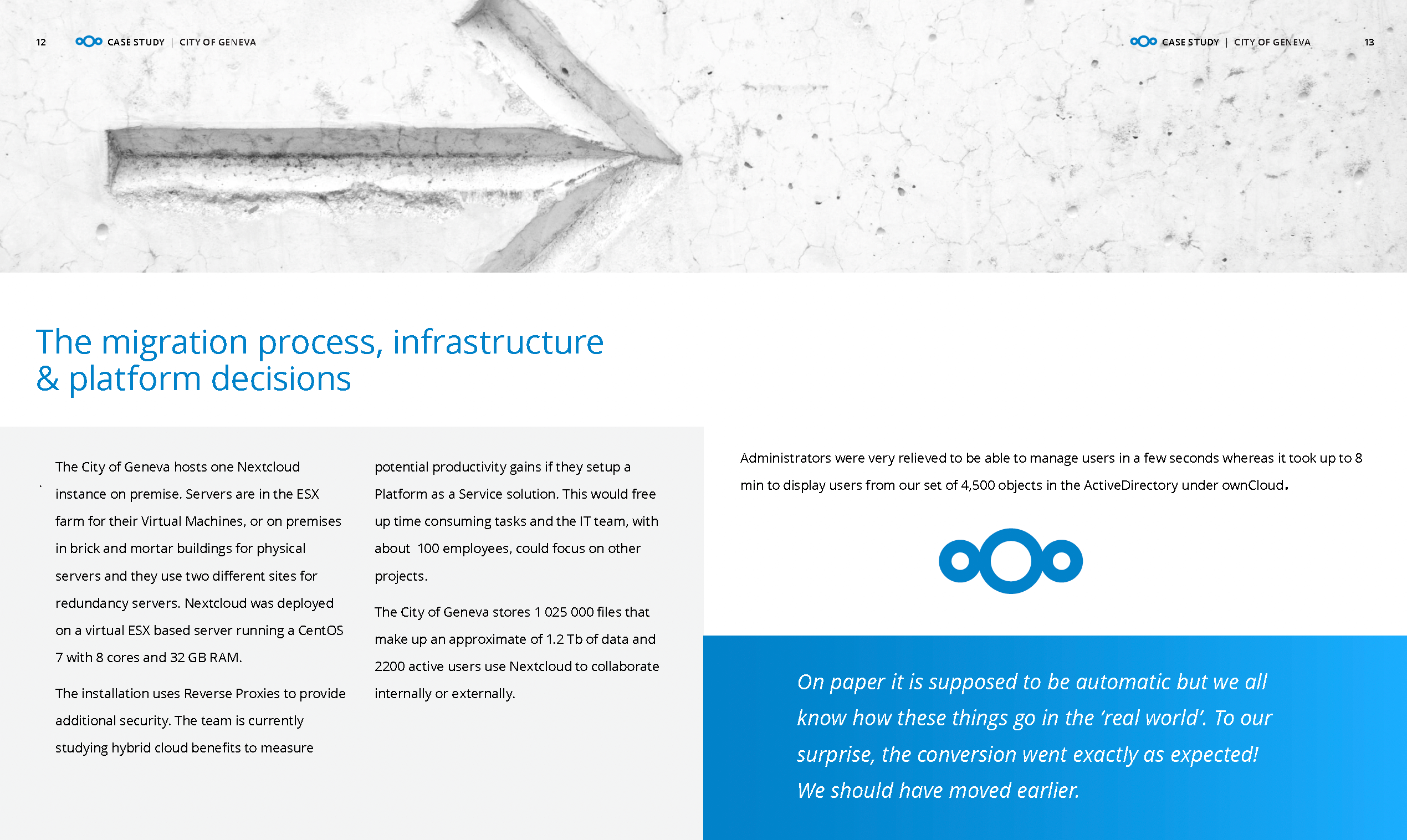 Nextcloud also notably delivered on many factors relating to their unique needs, including:

The future of Nextcloud in the City of Geneva

From Nextcloud Files to Calendar, the City of Geneva employees find our platform and service useful, intuitive, and plain and simple easy to use. Why stop there? They are currently underway to implement even more Nextcloud capabilities like Deck and Talk.

The City of Geneva is using their Nextcloud Enterprise subscription to its maximum advantage. From being able to ask for new features anytime, to have quick resolutions for ad-hoc issues, Enterprise allows the client to focus on what they need and want, while having direct and 24/7 access to Nextcloud engineers who know the platform like the back of their hand.

Interested in reading the full case study? Download the case study here and read more about the expectations, challenges, migration, and results from the City of Geneva.

1 Like
News about City of Geneva: Cooking up an old Story?