Can't update Nextcloud From version 23 to 24 by Web Interface and Updater.phar

The nextcloud version which I used now is “Nextcloud Hub II (23.0.10)”, but I found that the latest version on nextcloud .com is 25.
I tried to update the version by web interface and command line “updater.phar”, the response is “Your version is up to date.”
Could someone please help me to solve the problem? 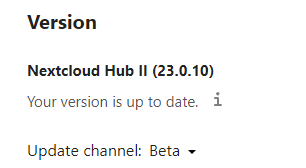 The problem has been solved after the new version of NC been released.