I have recently installed Nextcloud 25.0.1 manually. At first I got some errors but I managed to solve them with the help of different tutorials.

I have it all with http, since when using it through a VPN, there is no need to use https. I say this in case it has something to do with the problem that I am going to explain below.

With Nextcloud already installed, running, the cron running fine and everything ok, I had almost claimed victory, until I tried to install an app and saw that there is no way to do it. Every time I try to install (whatever the app is), I get the following error message.

I have searched many internet sites and have not found any answers that help me.

Thank you very much.

I have been able to install a couple of applications, but some such as talk or calendar still do not allow me.

I also leave here my config.php file in case you see something wrong.

Hi there, you can try this workaround

Look at this page for further information:

Hi, thanks for your response.

another hint maybe this one (older but …)

Fixed the problem for me. Cheers!

they changed the timeout value in /lib/private/Installer.php

I’ve already made this change before 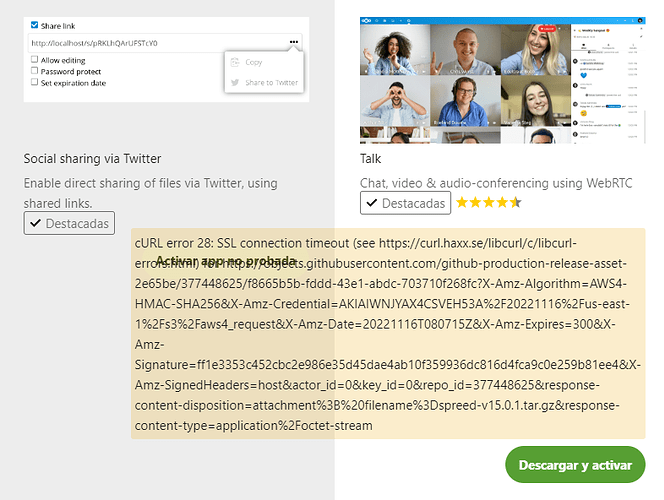 is it the same, when you try to install the app via command line (OCC Tool)?

Is it possible that the problem is because I installed the minimum version of Ubuntu Server? I have another Nextcloud working, but with docker, so I rule out the router’s firewall and I don’t know what other configuration files to edit anymore

With the given info it seems to be a networking problem … Docker, Router, … but i am not able to fix this.

Something seems to slow down or block your traffic to outside websites like the nextcloud app store … and maybe more websites.

Sorry, i think one of those with higher nexctloud skills should have a look at your prob.

It finally turned out to be an incompatibility with the network adapter of the proxmox virtual machine. I switched from virtIO to Intel and now it works perfectly.

Thank you very much @chrissi55 for your interest.